Your First Trip to Japan: The Most Important Not So Obvious Thing You Need to Know 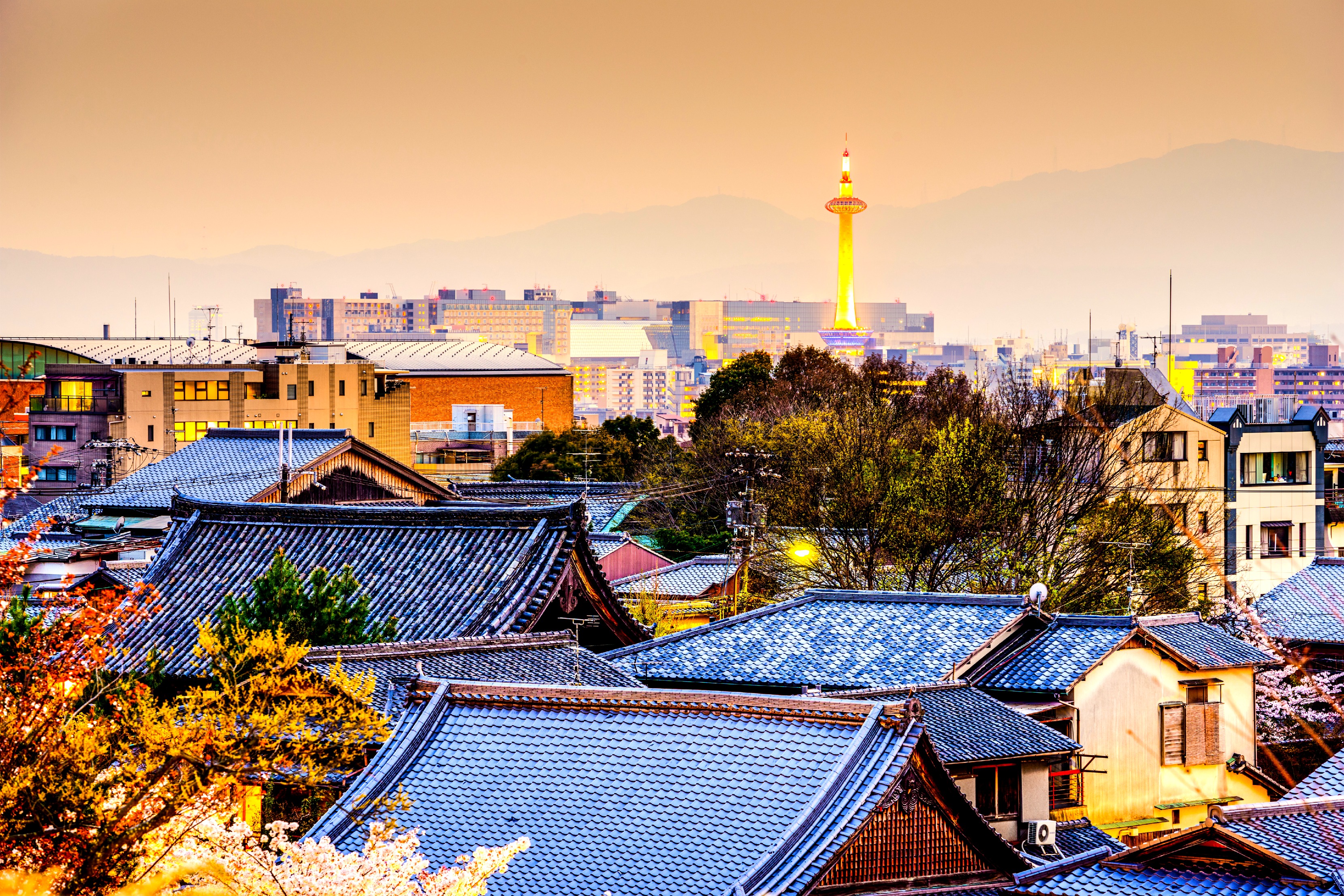 There is nothing more deceptive than an obvious fact. ~ Arthur Conan Doyle

The most important thing you need to know, as you’re preparing for your first trip to Japan, is that the people there speak Japanese.

I know. That sounds so totally obvious.  Possibly even unimportant.

Especially if you’ve traveled overseas before, say to Europe or Latin America, where you were able to get around and sightsee easily enough without speaking much of the local language. “Been there, done that,” you say. “I’ll be fine in Japan, too.”

But, Japan is different. It’s a place where even in Tokyo, its most cosmopolitan city, everyone speaks Japanese and most only Japanese. Where the signs for everything, including advertising, storefronts, menus, newspapers, and street names – when you can find them – are typically in Japanese only in its various written forms – kanji, hiragana, katakana, and romaji – every one of them so unfamiliar.

Hey, where people even cross the street differently. 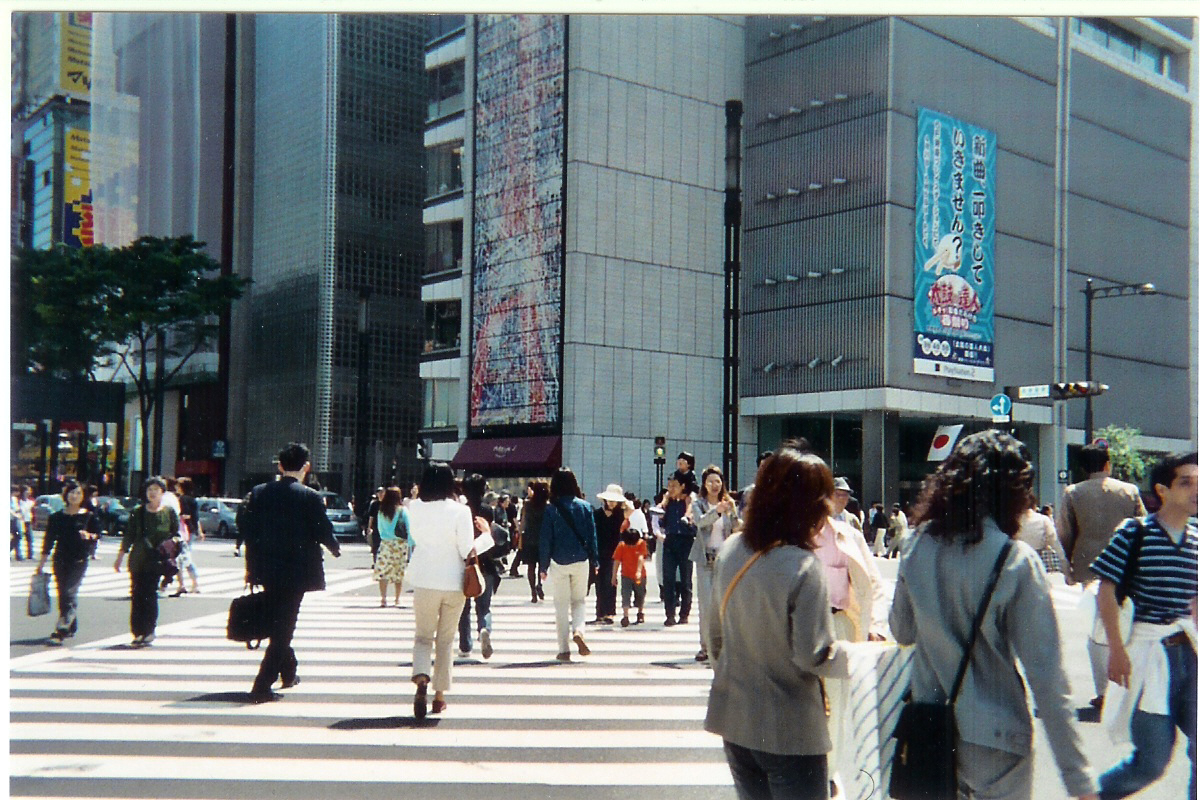 Crossing here, there, and everywhere in Tokyo.

So, if you don’t speak Japanese, now is the time to learn. You’re going half way around the world, spending precious dollars and time, and you want to make the most of it.

Our grandmas were right to teach us that remembering to say “Please,” “Thank you,” and “Sorry” would take us far in life, but navigating Japan solo requires more than a handful of polite phrases – as my husband learned during our initial trip to Japan together – his first time in Asia ever.

I planned the trip and recommended some good books on Japanese culture and language for him to read as preparation.  But, after learning a few introductory phrases and going online to check out the stops on our itinerary, my husband declared he was ready to go.

OK, fine – so, off we went for a 10-day adventure on the islands of Honshu and Kyushu. 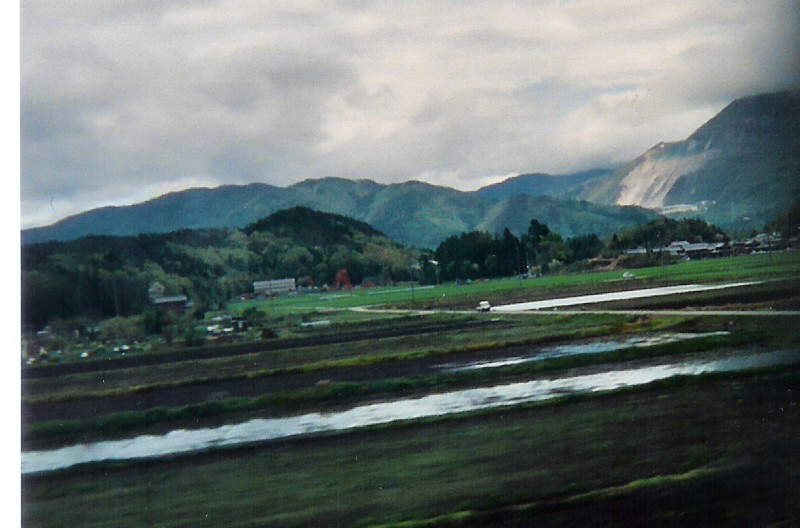 View of the southern Honshu countryside from the shinkansen.

Months later, the poor man can still relate in great detail the things that made it such a “traumatic experience” for him.

Trauma set in, he says, when we arrived at Narita airport, grew when we entered the Tokyo subway system.  He was surprised – ok, shocked – that all the signs were in Japanese and that, beyond the basic knowledge of “This is Tokyo,” he never really knew where he was.

He had seen, while traveling in Mexico, the familiar “Coca-Cola” logo posted everywhere, and in Paris, he had had no problem navigating the metro by himself – could actually go somewhere on his own and get back to where we were staying.  No French required.  But, in Tokyo, Osaka, and even the much smaller city of Nagasaki, it was a different story. 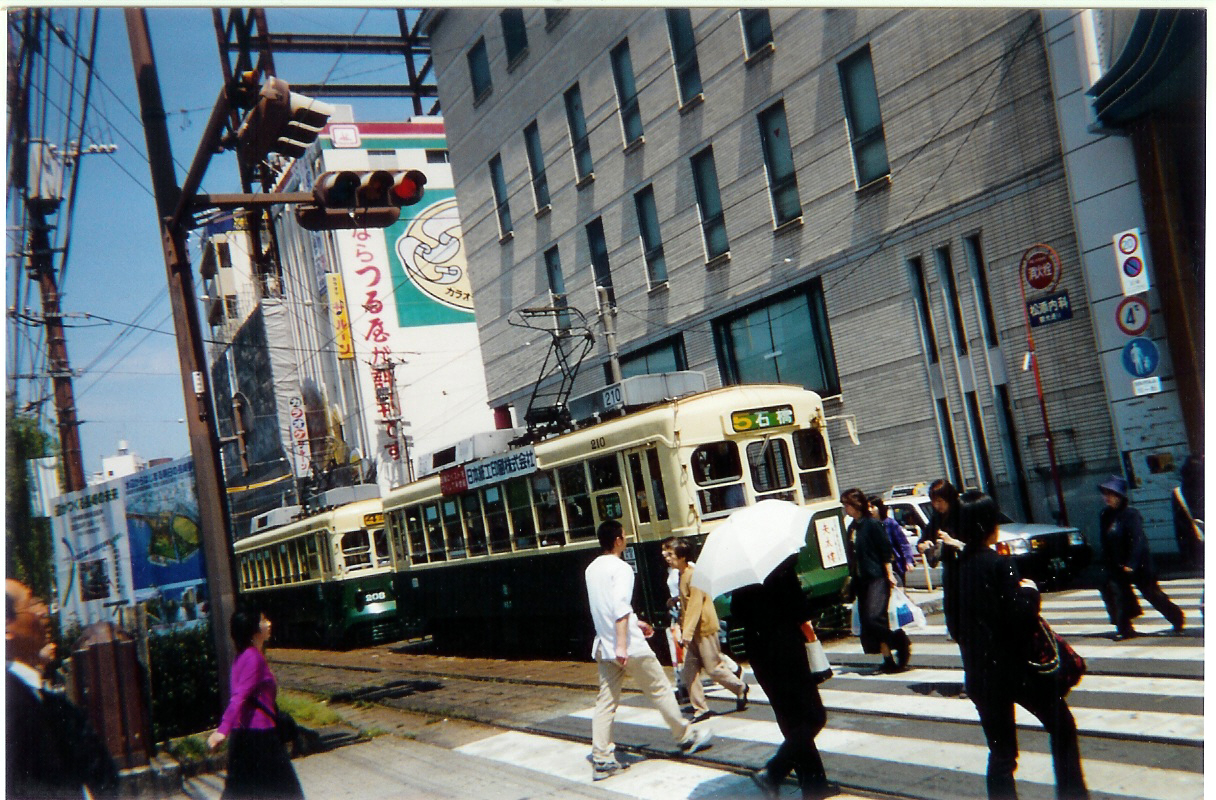 Getting around in Nagasaki.

The fact that some of the larger cities made available subway maps with station names labeled in romaji that he could read, or at least pronounce, hadn’t helped much, he insists. “Sure, I could stay underground, ride the subway all day, but sooner or later I’d have to go upstairs to the street – then what?” 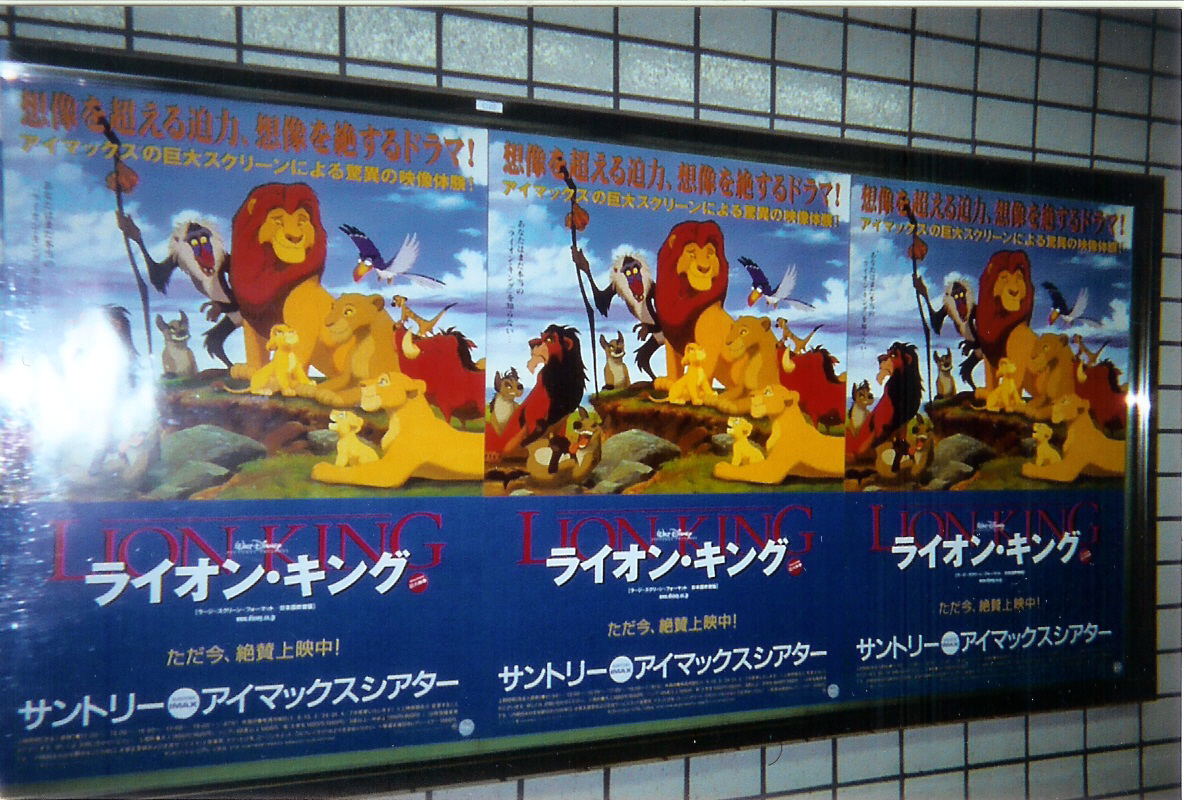 Ad for the Lion King, with title rendered in English and katakana – one familiar sight on the subway.

My love had come to Japan fully expecting the people to speak a language he didn’t know.  That wasn’t so bad – in a pinch, he knew I’d be there to interpret or translate. But not being able to read or sound out a foreign word that was, at least, phonetically recognizable to him as an English speaker?

That was a new experience.

He never bothered to carry any of our inn’s business cards when we went out and about. “What if,” he muses now, “we had been separated? I couldn’t have told anyone where we were staying.” 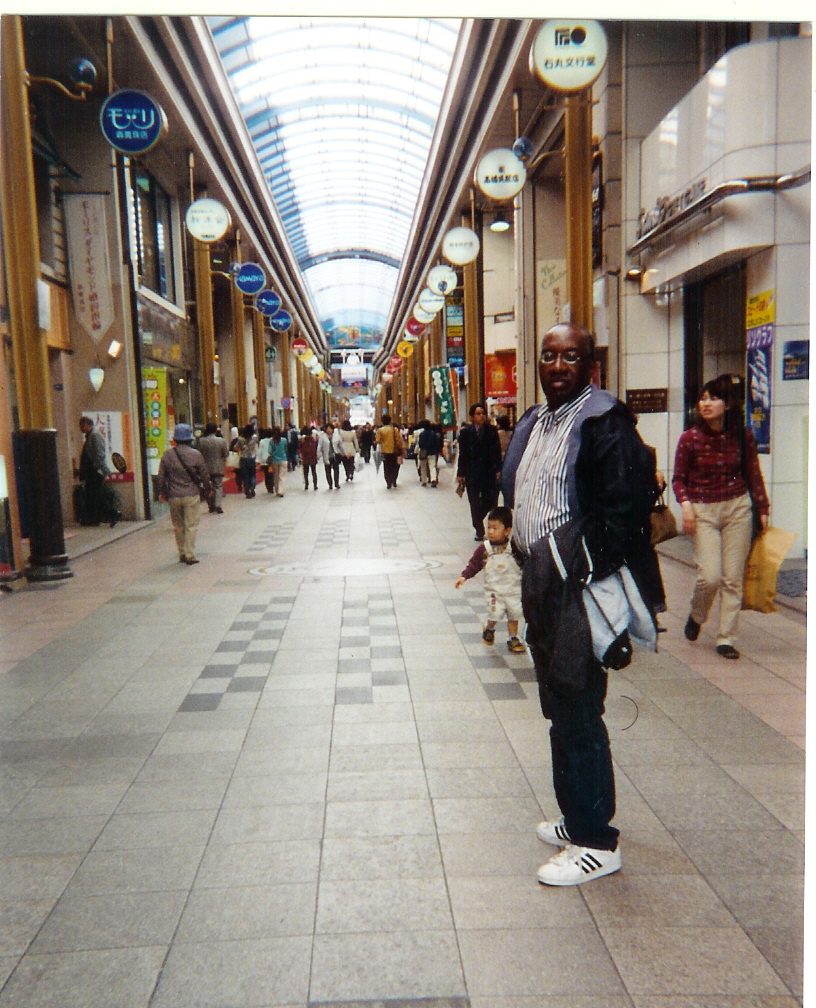 Nice looking shops. Now, WHERE is the hotel?

Back to you and today.

If time is of the essence, knowing how to ask the most basic reporter style questions of “What,” “Where,” and “When” is key. Learn enough vocabulary to get directions and info regarding basics like rest rooms, groceries, and modes of transportation.

Prepare and practice your personal introduction with simple words to share about your family and interests when opportunity arises – it will. For the rest, keep a pocket dictionary close-by, your ears and eyes open – and smile.

The natural curiosity and warmth of most of the Japanese people you meet will carry you the rest of the way.

If you’ve been to Japan or another country where they spoke a language largely unknown to you and used another “alphabet,” you probably have a good story to tell.

If so, please share in a comment below. Your fellow travelers ~ including me ~ would love to hear it!

If you’re considering a trip to Japan and your Japanese is either weak or non-existent, check out these resources:

1)  Japanese Pod 101 ~ provides a convenient way to learn Japanese through video and audio lessons, whether you are an “absolute beginner” or a more advanced student.

2) Tofugu ~ is brimming over with resources no matter your level, including helps for learning the various kinds of writing used in Japan, so you can read the signs and ~ wow ~  know where you are.