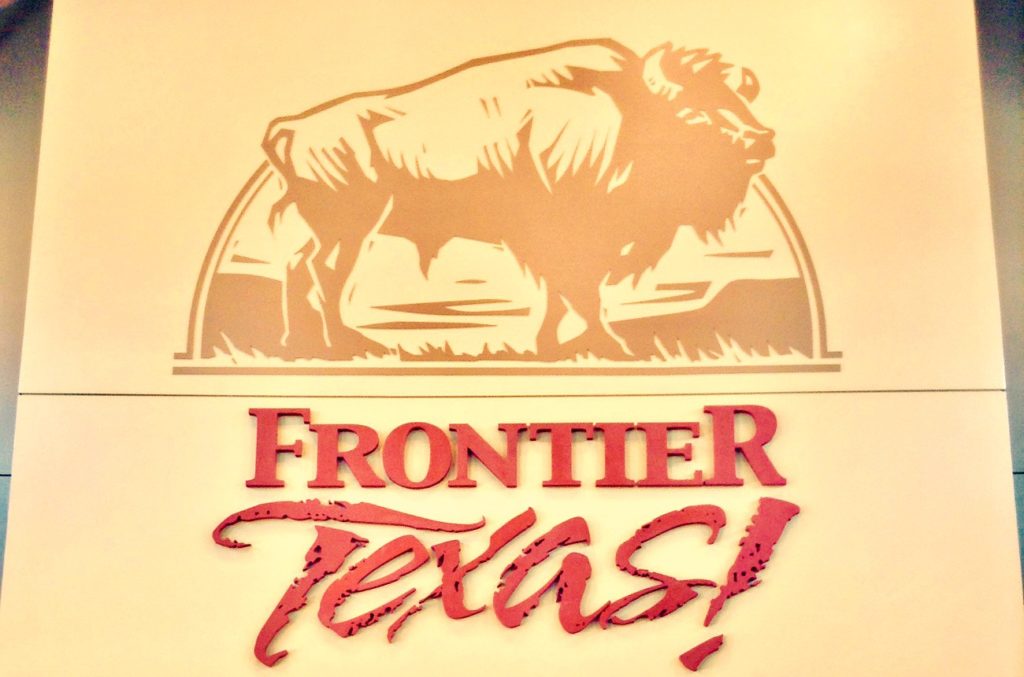 Ever been to Abilene, Texas?

If not, you’ll want to work hard to fit this mid-sized Texas city into your itinerary the next time your travels take you across North Texas.

The reason why is the city’s major attraction, Frontier Texas: a fun ride through the Old West you’ll like whether or not you’ve ever considered yourself a history fan.

Hubby L. and I BOTH enjoyed our visit there when we traveled from our Las Cruces home to Fort Worth, Texas a while back.

So I can confirm you don’t have to be crazy for history  ~ like I am and he isn’t ~ to enjoy your visit.

(But you’re in for a special treat if you do.)

You only need to luv real stories about real people who lived FULL OUT through really challenging times.

Frontier Texas is full of them: heroes and villains of the Old West, and some in-between.

Yet all of them seem to have been gutsy, afraid of nothing and nobody.

And most have stories you won’t soon forget.

What makes the stories so memorable is that the characters tell them to you themselves ~ through holograms.

You remember what a hologram is, don’t you?

You saw one at the start of the original Star Wars movie when Carrie Fisher’s Princess Leia appeared, pleading,

Help me, Obi-wan Kenobi. You’re my only hope.

Princess Leia wasn’t really there, the use of light to create a three-dimensional image ~ or hologram ~ of her, only made it look as if she were.

Holograms, depicting real people, are what bring this Texas frontier trip to life from beginning to end.

Your experience begins right there in the lobby. 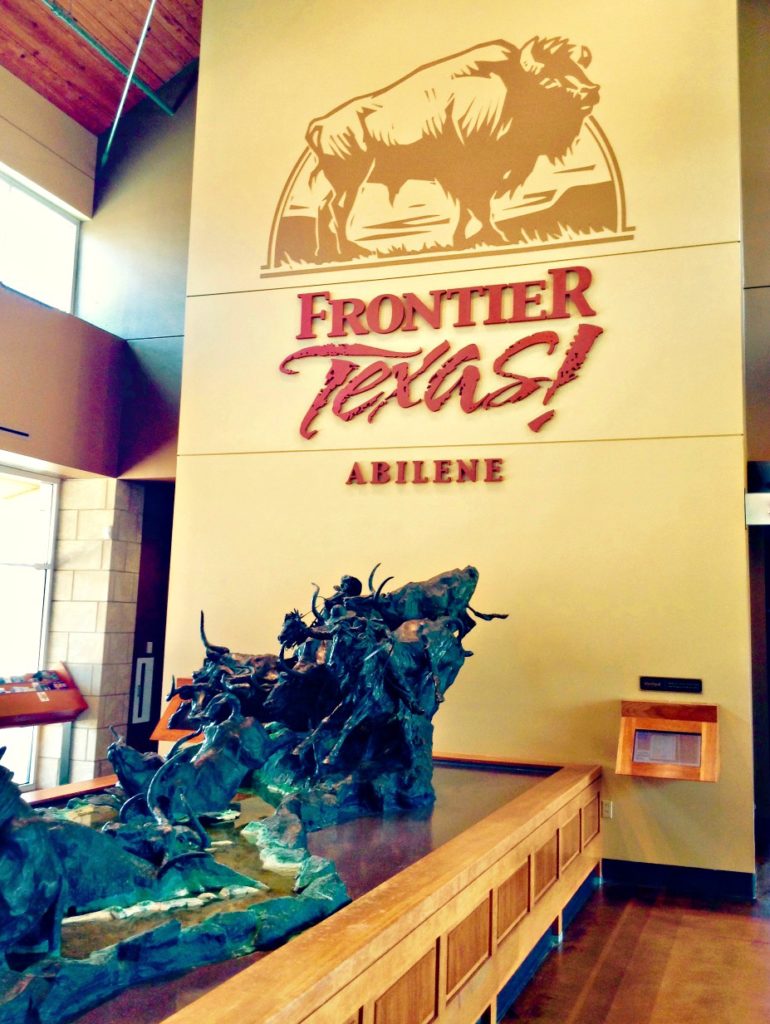 So don’t sit down. Instead, walk around and take a look at the photo portraits on the wall. 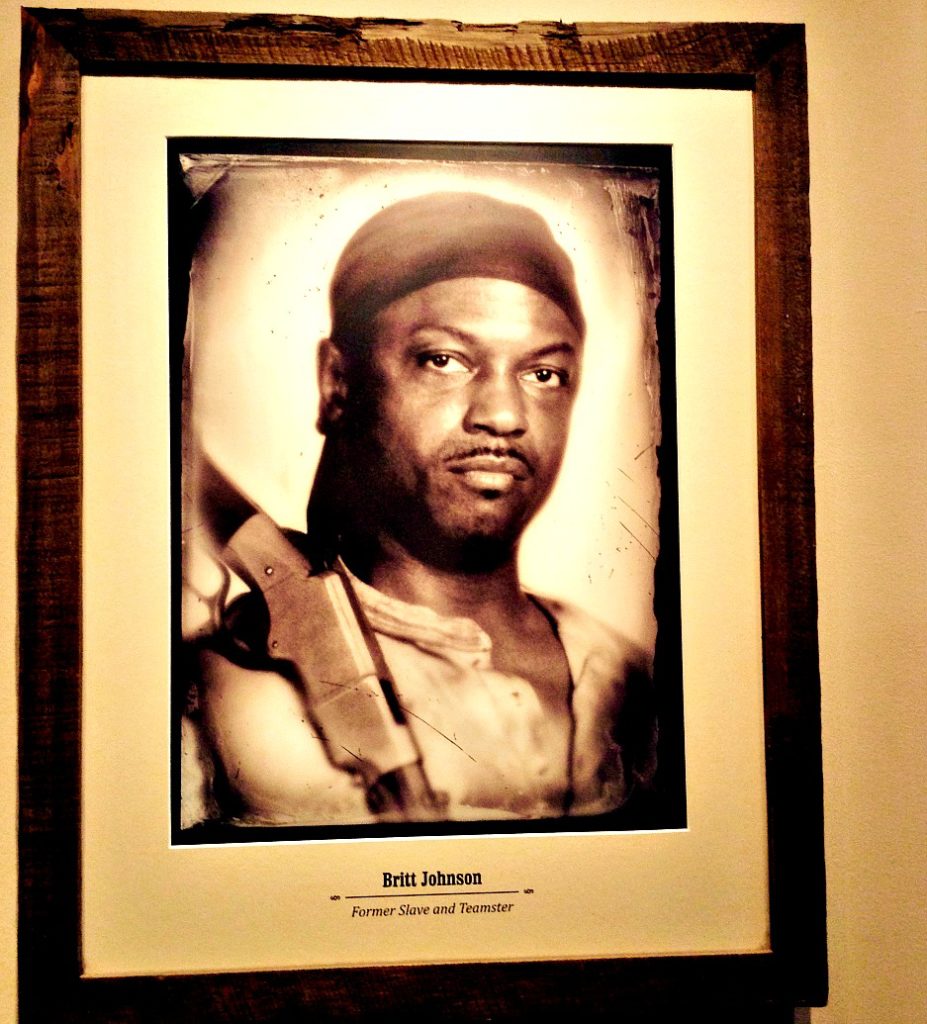 This one-time slave would find success as a ranch foreman, epic family man, and trailblazing entrepreneur before dying a hero’s death on the Texas frontier.

Your opportunity to learn more about Johnson and the others depicted on those walls continues inside the Frontier Texas Welcome Theater.

That’s where you’ll watch the movie, Blood & Treasure. In it, veteran Western actor, Buck Taylor, presents an overview of the time period about to step into. He also introduces us to the several guides ~ Britt Johnson is one ~ who will talk to us along the way.

Then once you leave the theater,

STATE-OF-THE-ART TECHNOLOGY LANDS YOU SMACK DAB IN THE MIDDLE OF THE TEXAS FRONTIER!

Did you ever get caught in the middle of a shoot-out? Or a buffalo stampede?

You’ll have a chance to experience both of these events at Frontier Texas.

And talk about cultures clashing!

You’ve got Americans moving into the area from the east, Americans already there used to living off the land, wanting to hold on to their way of life. With both of them doing their best to survive and make it in a hard land.

Yep, the Frontier Texas experience makes it clear that for 100 years ~ roughly 1780 through 1880 ~ there was plenty of turmoil and tears to go around on both sides.

But there were triumphs, too ~ if only in the fact so many survived with spirits intact.

From newcomers who came to call themselves Texans with pride ~ as their descendants still do! And from people who, with the same amount of pride and spirit of self-determination, never did identify as Texans.

You learn that not even the leaders of the tribes who dominated the Texas plains at the time had the same perspective or vision for securing the future of their people.

For instance, among the first guides you meet are Esihabitu and Satanta, leaders of the Comanche and the Kiowa, respectively. Esihabitu tried to get along with white men. Satanta . . . not so much.

Further on in the exhibit, you get to meet Pat Garrett, Billy the Kid’s killer. But instead of standing behind a sheriff’s badge as you might expect, he’s polishing shot glasses behind a bar. Still, he’s got a few things to say about what happened between him and Billy that fateful night in 1881.

Many met both hostility and heartache on the Texas Frontier. 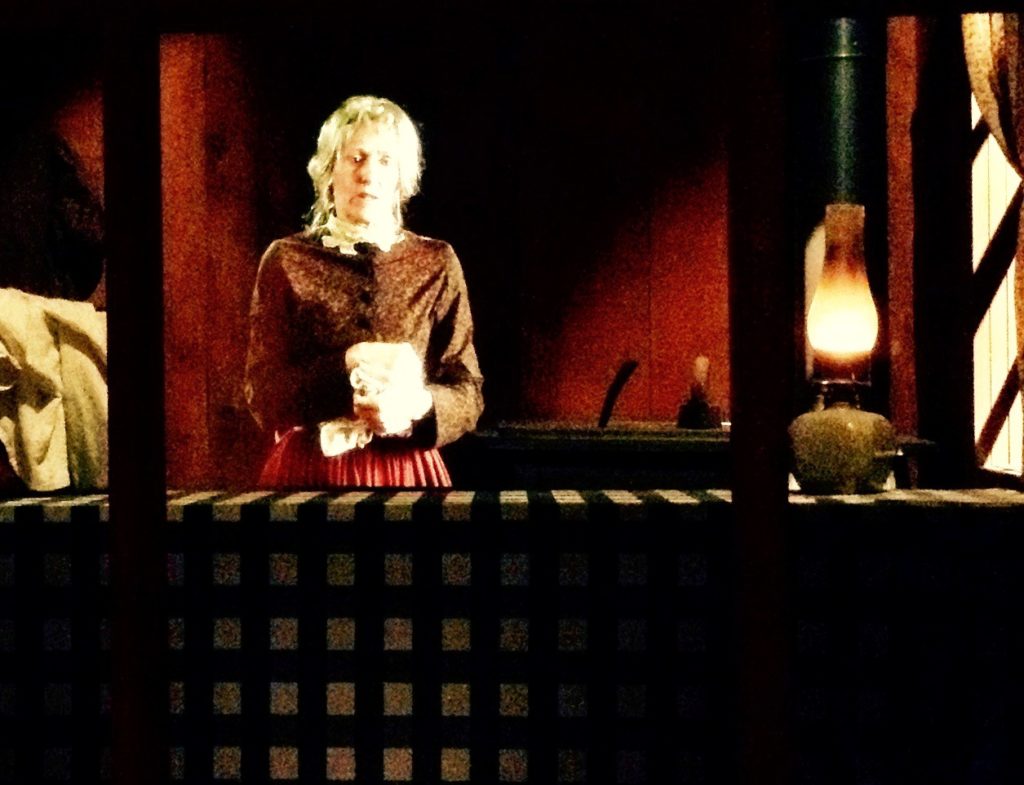 She was widowed FOUR-times and was one of 6 women and children captured in a Comanche raid where they forced her to watch the scalping of her daughter.

And that’s not the half of her troubles.

Yet, she had enough grit to keep both a ranch and boarding house in operation for many years.

Yet, spend a little time with her, listening as she tells it and maybe you’ll walk away feeling a bit lighter in spirit.

And a lot more thankful, as I did.

I found myself thinking, Man, compared to all she went through, I’m doing great!

Mrs. Clifton’s story, most of all, impressed upon me how so many kept going to build lives, families, and businesses in the face of so many odds.

Frontier Texas offers plenty of real enough to touch displays as well. The many things you can see and explore are as surprising as the people you meet. 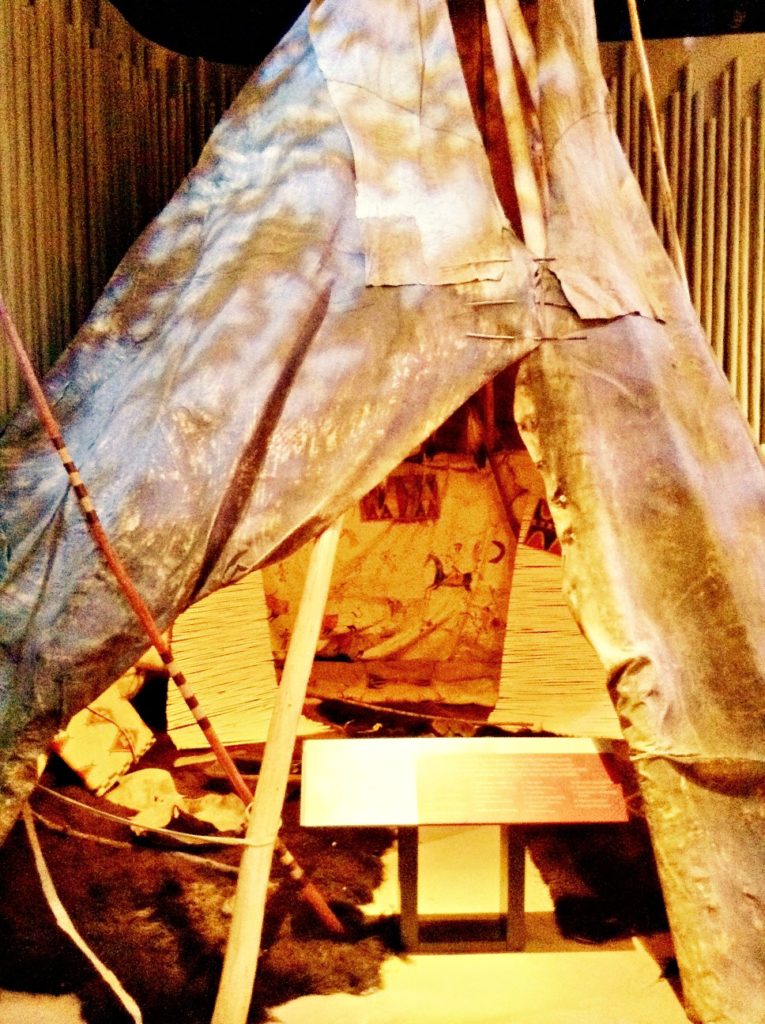 Inside the tipi, we found many objects Plains Indians used in everyday life, including cooking utensils, rope, and toys. All were made with materials found in nature, mostly from buffalo, even the artwork.

I had “heard” about how killing off the buffalo ~ as you will hear one of the hologram characters talk about doing for a living ~ had killed a whole way of life for the Comanche, Kiowa, and other Great Plains tribes.

But now I SAW it.

With no clothes, no shoes, no dishes or cookware, and no food to put in them, we’d be in a bad way, too. Naked and hungry, without even a roof over our heads.

No doubt about it, Frontier Texas means to tell you the whole story of the Texas frontier~ the good, the bad and the supremely ugly. It’s a full-course meal serving up history with drama, sound, and remarkable visual effects.

WHERE, WHAT, and WHAT NOT to EAT

There are two places where we stopped on our way to Fort Worth I want to tell you about.

The first is a definite “don’t” recommendation, which is rare for me since I’d much rather write about things I like than things I don’t like.

But this is one of those cases where the food was a real letdown.

The burger (and the fries it came with) 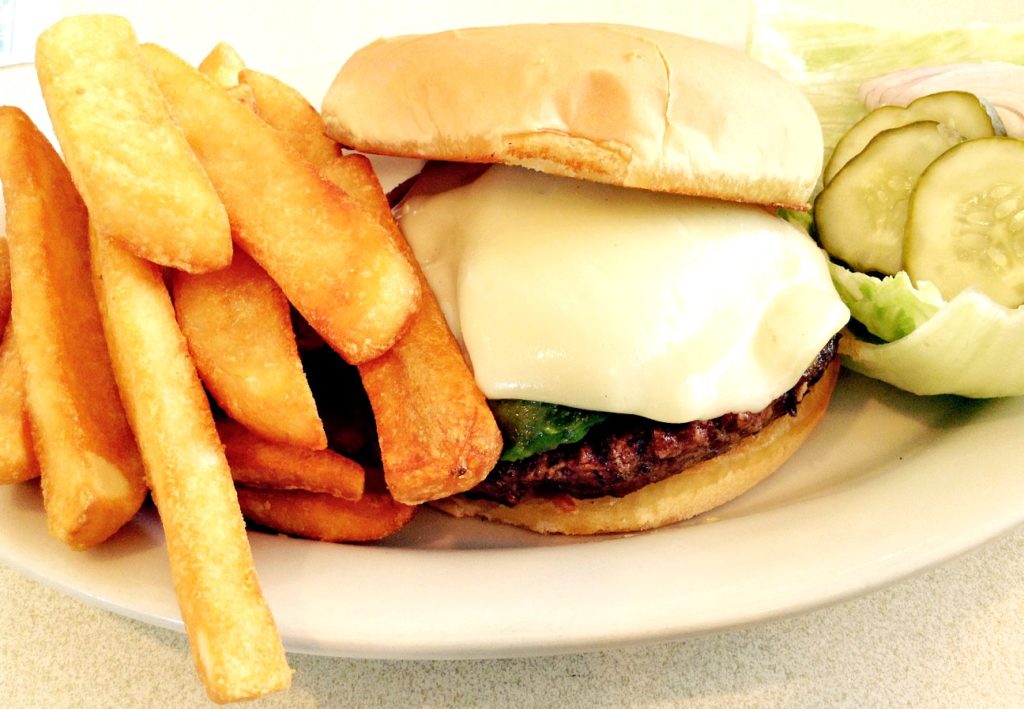 looked better than they tasted.

For one thing, the meat tasted “funny” ~ like anything but beef.

Plus, they overdid it on the avocado and I hadn’t gone there for a Green Avocado Burger.

Now, you know better than anyone how I like trying new things, so the fact that there was avocado on a dish that typically doesn’t have any was not a problem for me.

This was just one of those times when too much of a good thing really was too much.

New Mexico has plenty of delicious burgers with good beef and generous amounts of green chile at other restaurants on the Green Chile Cheeseburger Trail.

Now, the second dining experience on our New Mexico to Fort Worth run is a definite “do.”

Stillwater Barbecue serves delicious Texas barbecue. That fact alone qualifies it as a place you can count on for a West Central Texas meal that will satisfy.

You’ll feel as if you’ve scored a real bonus if you show up there on a Thursday, as we did. Thursdays at Stillwater Barbecue, you see, are when you can have all-you-can-eat pork ribs and two sides.

So while L. opted for beef brisket, I ordered the pork ribs.

And then I looked up at the blackboard menu to choose my sides. Green beans would be the first.

That’s when I discovered Stillwater Barbecue serves pecan cobbler ~ be still my heart!

So for a small extra fee, I chose the cobbler as my second side because, well, I’m nuts for pecans, and who knew when we’d be passing this way again? 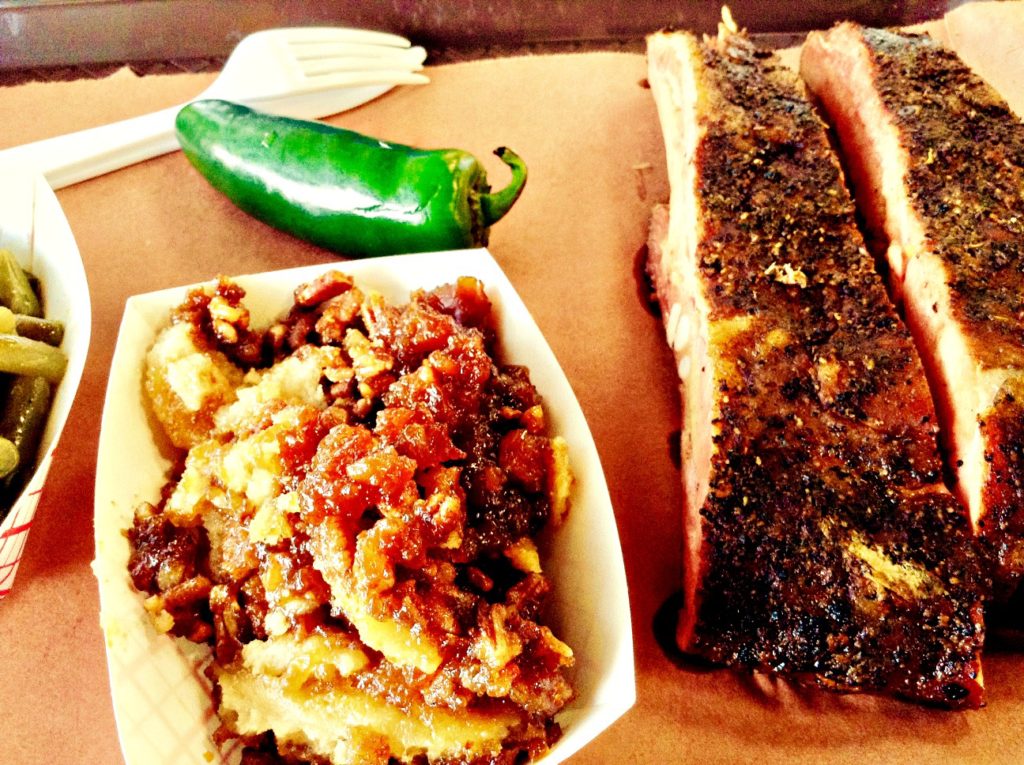 The entire taste experience, to sum it up, was a good one.

The green beans could have had a bit more flavor but were sure enough fresh. The ribs had lots of good flavor and smoke; they were sweet, too, just the way I like them.

The only thing I felt sorry about was that the restaurant would be closing at 3 pm and we had arrived there at 2.

But oh how I savored those tender smoky ribs and enjoyed a couple more with the short time I did have.

Since our visit, Stillwater has joined the ranks of Texas’ “Top 50 BBQ Joints” ~ and I’m not surprised.

So next time you find yourself west of Fort Worth on the I-20,

turn off into Abilene.

Then after you’ve spent time at Frontier Texas getting to know the real people who once lived on the Texas frontier, 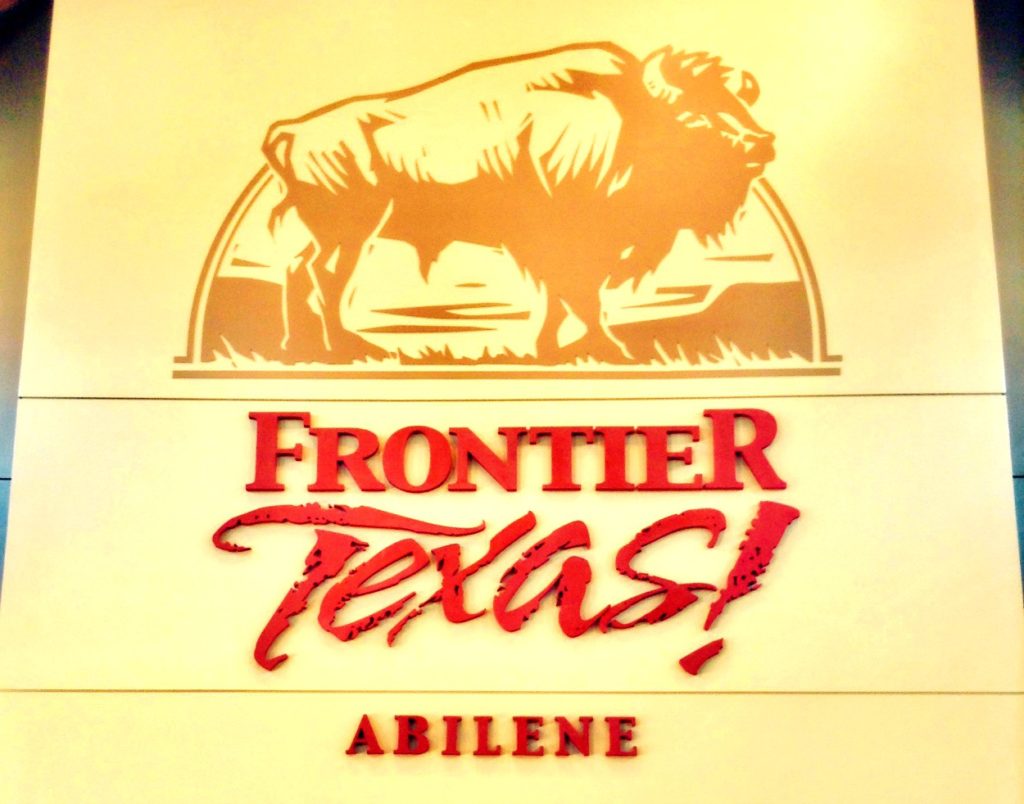 break for some real Texas barbecue ~ among the best in the state. 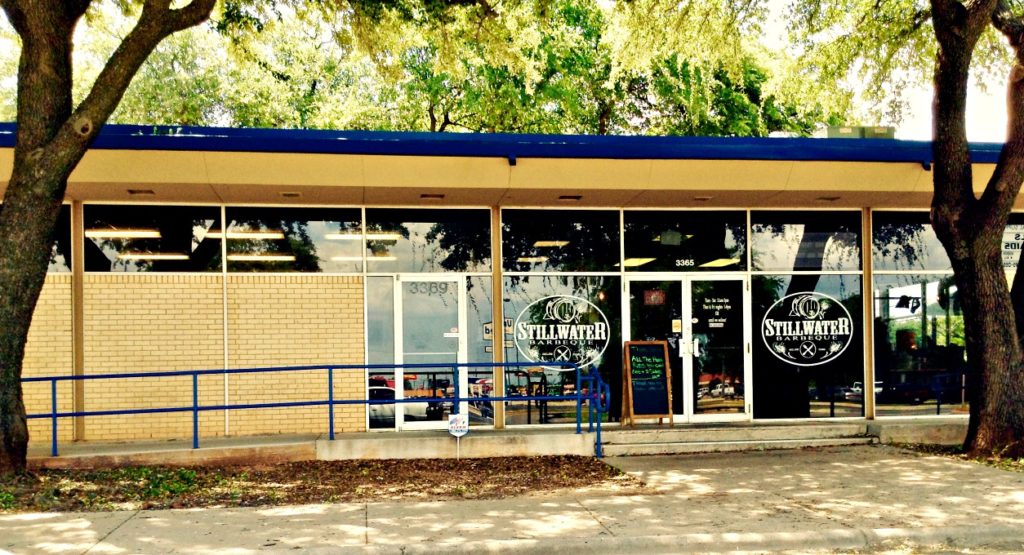 Where have you had your best barbecue experience EVER?