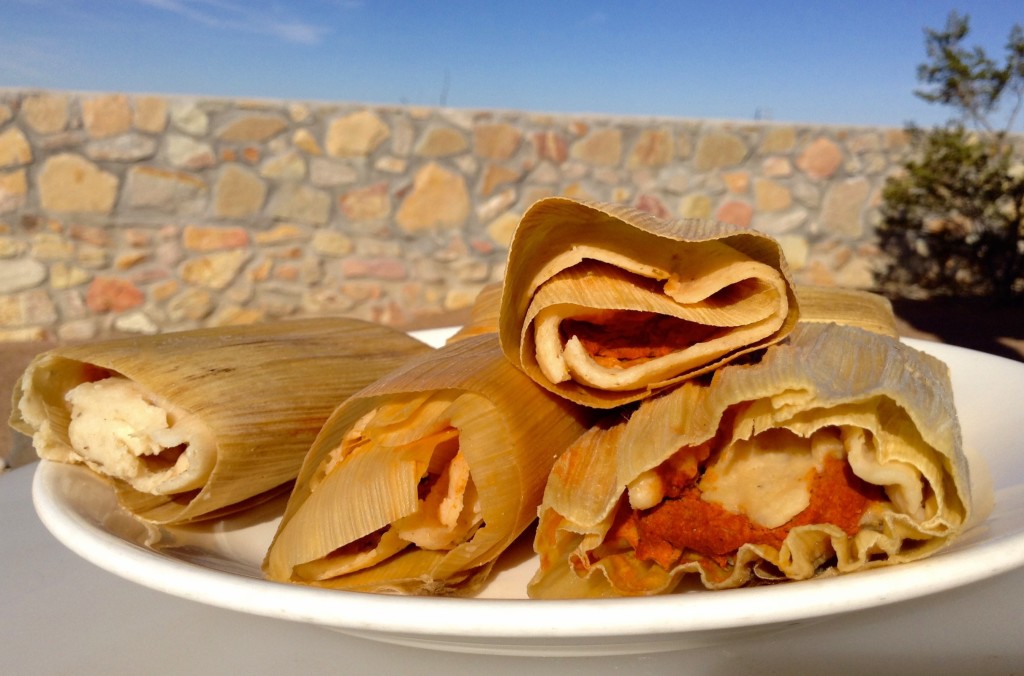 Most every weekend these days you’ll find me, shopping at a tailgate instead of the supermarket, for tamales on the Las Cruces tamale underground.

The tamale underground is the unregulated network of street vendors who sell tamales on the cheap in parking lots, at laundromats, wherever hungry customers might find them.

Much like the lines you see heading out of the doors of the best neighborhood bakeries in Paris, you can be sure when you see a vehicle with a big sign declaring TAMALES there’s something good inside.

At a typical rate of a dollar per tamale ~ in bags of one dozen or a half-dozen ~ fresh street tamales are one of the better buys in Las Cruces. For lunch, dinner, or snack.

First time buying at Tamales Luz ~ Luz is the vendor’s name ~ I bought a half-dozen of red tamales. In this case, tamales made with red chile sauce and pork.

Opened my bag of still toasty warm tamales as soon as we arrived home. Then I unwrapped the cornhusk for my first look at the savory prize inside ~ and took a whiff.

What? Do you never smell your food?

Actually, I have a habit of doing this mostly with Mexican food, since the aroma of masa is kind of wonderful. Masa is a lime-treated corn dough and the base for many Mexican staple dishes, including tortillas and gorditas, as well as tamales.

In fact, the word tamale comes from the Nahuatl word nixtamal meaning masa.

Anyway, Luz’s tamales were delicious. That first one was eaten up right after that first whiff, that’s why there are only five tamales in the photo instead of six.

And since I’ve eaten there now for three weeks in a row with no ill effects, I’ve found the experience as safe as it was tasty.

Even though the heat level of the chile is at the higher end of medium, more than what I’m used to, I keep going back . . . they’re so good.

Each of the remaining five tamales reheated very well in the oven at 250 degrees Fahrenheit, wrapped loosely in foil.

Some tamales require the wet steamed heat to become soft again after refrigeration. But the masa on these babies never hardened; every tamale stayed pliant and supremely edible.

Ready for a delicious taste of the Las Cruces Tamale Underground? Here’s what you need to know:

So, let’s eat well and help a gal pay her bills.

What has been your tastiest street food experience ~ legit or otherwise?