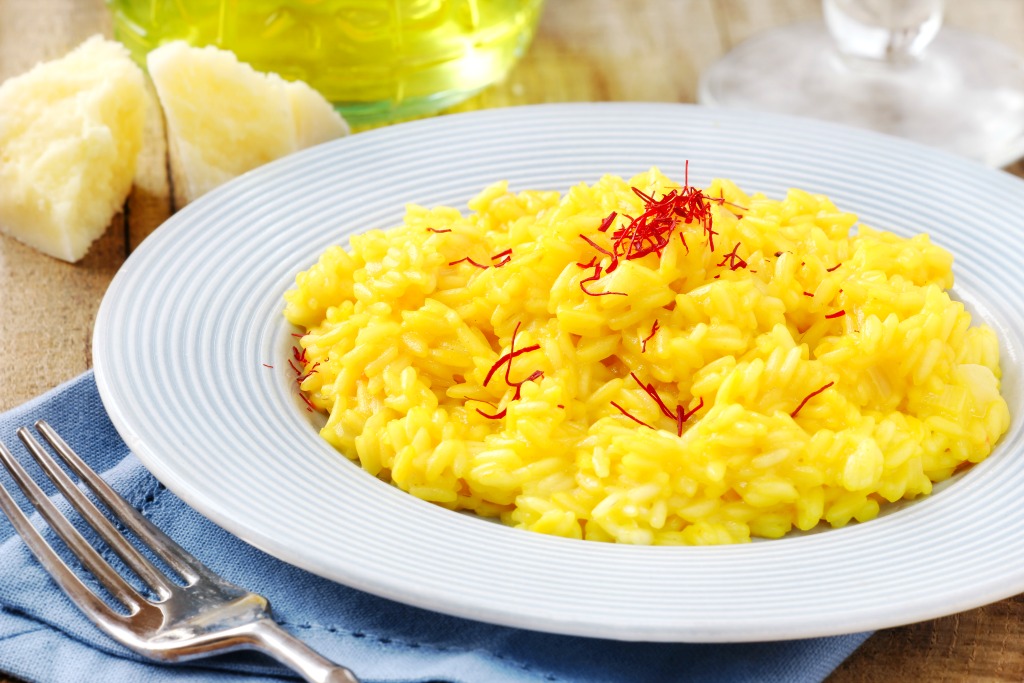 Italian food really reflects the people. It reflects like a prism that fragments into regions. ~ Lidia Bastianich

If you’ve grown up believing fabulous plates of pasta, pizza, and bread were the greatest pleasures Italian cooking had to offer, hold on to your hats, dear foodie explorer, there’s MORE.

The foods of Naples and other cities in Southern Italy, from where the majority of Italian families in the U.S. hail, are just the tip of the iceberg.

Or, rather, the tip of the Italian boot. 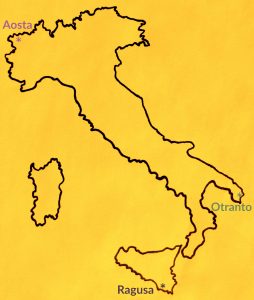 From the city of Aosta at the top of the Italian boot to Otranto in its heel tip is a distance of over 780 miles. From Otranto to Ragusa on the island of Sicily you’d have to drive another 450 miles.

As you can imagine, there is a world of difference in climate, landscape, and therefore, cuisine, as you travel from south to north.

Just when you think you’ve gotten a handle on how a “typical” Italian meal is put together ~ with olive oil, pasta, and tangy but meatless marinara at the heart ~ you drive up the road a bit and it all changes.

It is WAY up that road, in the eight regions that comprise Northern Italy, that you’ll find a rich and diverse cuisine where rice, potatoes, and cream sauces play the starring roles.

Northern Italian cuisine with its emphasis on local products including dairy, corn, rice ~ Italy is Europe’s largest rice producer ~ will surprise you.

So make it a point to sample some Northern Italian cooking at your next opportunity.

For now, whet your appetite with a look at the specialty dishes of each of Northern Italy’s eight regions (listed in clockwise order, starting with Valle d’Aosta in the far northwest):

I expect you’ll find a new favorite of your own among them because every single one of these regional specialties is de-licious. And, by the way, you won’t see a single plate of spaghetti among them. 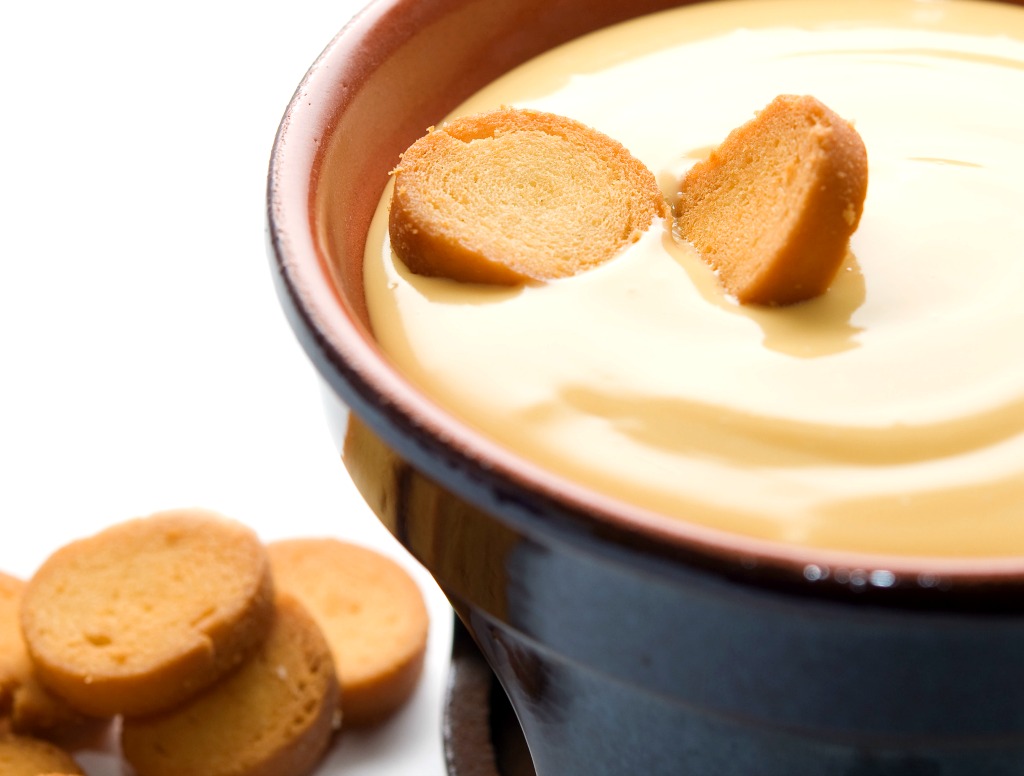 From Aosta in Valle d’Aosta. Dip toasted bread into this fondue made with Fontina, a cheese exclusive to the region. The mild taste and fragrant aroma of Fontina cheese have been thrilling Italians and others who appreciate good eating for more than seven centuries.

From Torino (Turin) in Piemonte. The story of the long, thin breadsticks known as grissini goes like this: Back in the 17th century, the Duke of Savoy, had a tough time digesting regular bread. So a local baker created an especially thin and crunchy breadstick as a cure.

Apparently, those breadsticks did the trick since the duke lived long enough to become King of both Sicily and Sardinia. And within a century’s time, grissini had become popular enough throughout Western Europe for Napoleon Bonaparte to have become a big fan.

Today, you’ll find them around the globe, with a variety of coverings. These include caramelized onions, fresh herbs, and sesame seeds ~ like the grissini pictured here. 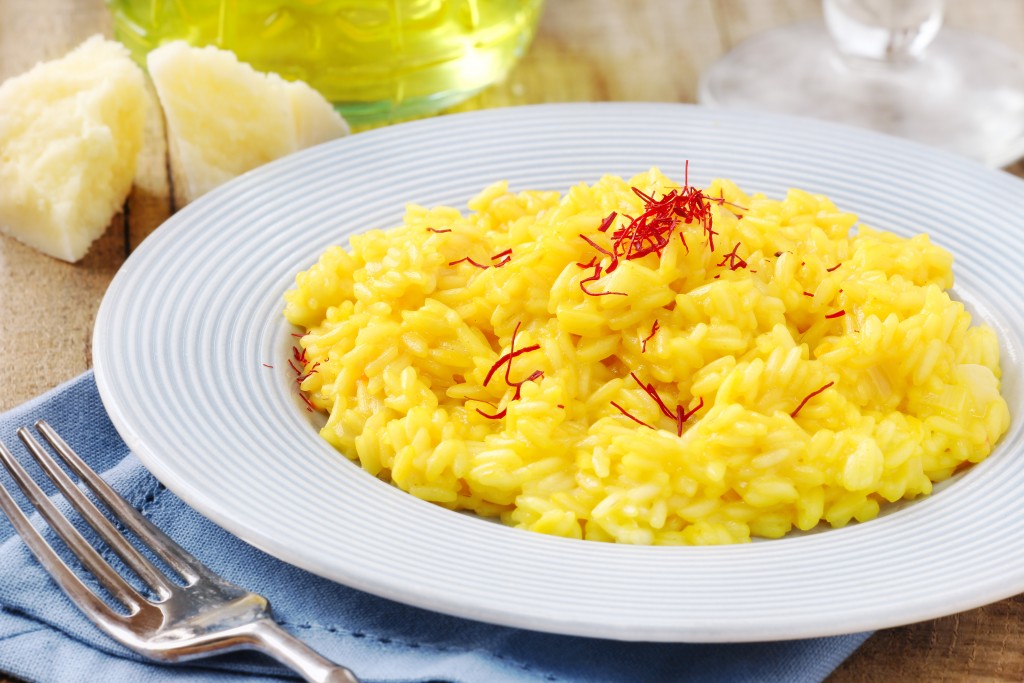 From Milano (Milan) in Lombardia. Rich and flavorful risottos are legend in Lombardy, which is arguably the leading rice-producing area in Europe. The most popular is this risotto alla milanese seasoned with saffron, the fragrant and fire-colored spice that Mediterranean cooks have prized since the time of ancient Romans. 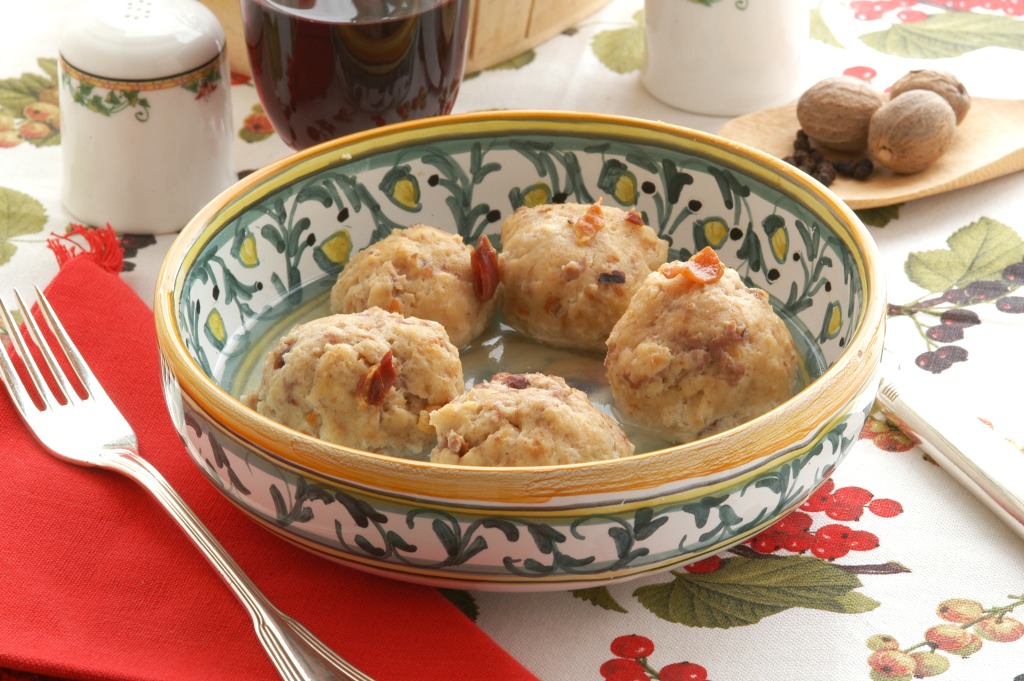 From Trento in Trentino-Alto Adige. Look no further if you’ve been seeking a new dish that’s both filling and economical. Knödel con lo speck, also called canederli con lo speck is a dish of bread dumplings laced with bits of lightly-smoked ham called speck. This dish is a delicious way to stretch a dollar and put your stale bread to good use. 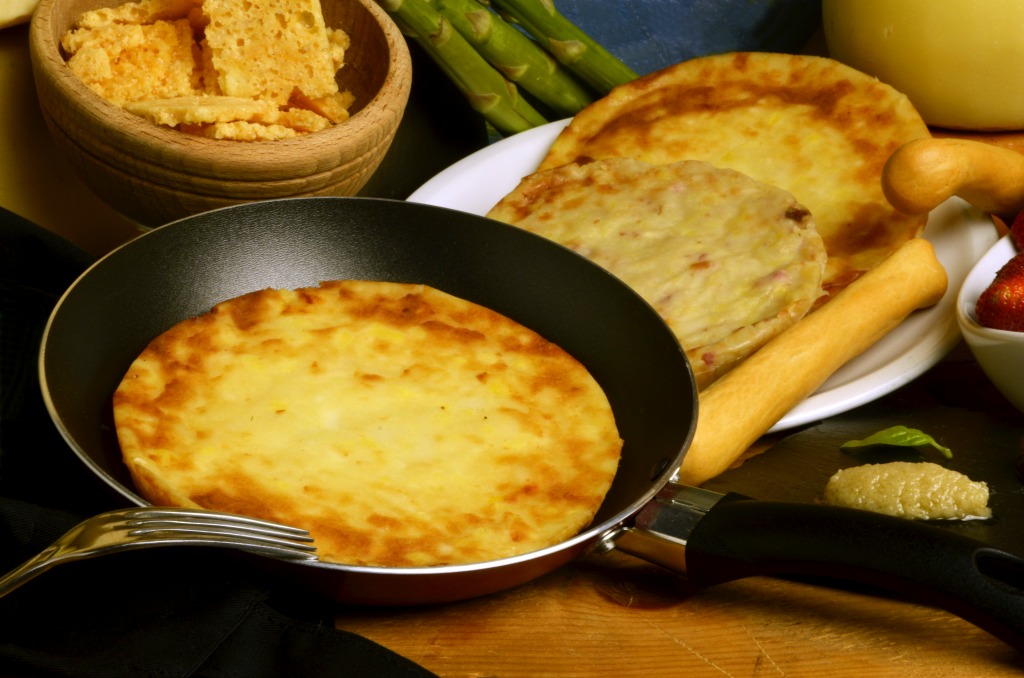 From Trieste in Friuli-Venezia Giulia comes frico. You’ll find it in two versions, “crispy” and “soft,” and the key ingredient in both is well-aged Montasio cheese.

Imagine the crunchiest cheesy snack you could put in a bowl for watching your favorite TV show and you’ve got “crispy” frico. These are cheese crisps you can make by frying Montasio in hot oil. (That’s right. Hit the road, Cheese Doodles.)

No less delicious is “soft” frico. Slow-cook this pancake of cheese melded with potato, butter, and aromatic herbs for a feel-good food guaranteed to put a smile on your face. 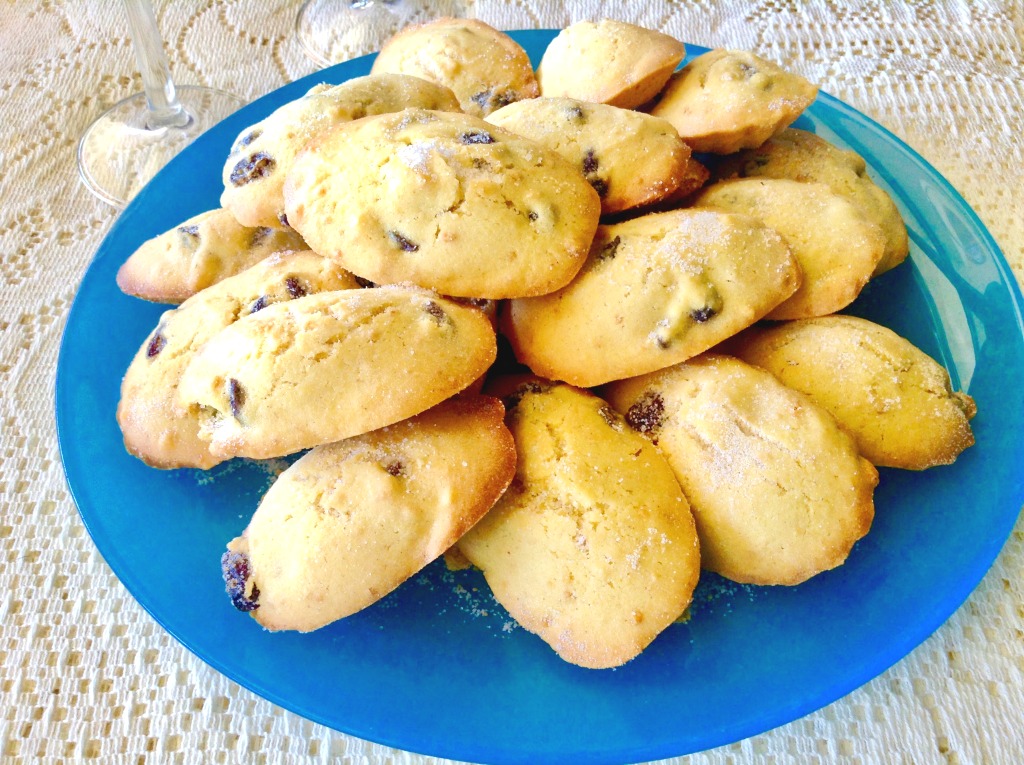 From Venezia (Venice) in Veneto. These cornflour and raisin cookies get their name from their warm golden color: the word giallo is Italian for yellow and gialleti or “little yellow ones” when spoken in Venetian dialect sounds like zalèti. (The “z” is soft, like a hiss.)

Now then, as to how to enjoy these delicately sweet cookies at home, let me count the ways… for breakfast instead of muffins or toast, as a special treat with tea, or, if you like to dip, try dipping warm zalèti into your hot milk in the morning,  your hot tea at midday and, if you drink wine at the end of your evening meal, you can dip them it that, too. It’s all good.

Ragù Bolognese, the essence of Northern Italian comfort food, is wonderful stuff. So much so that it reigns as the national dish of Italy. (And in a land that has gifted the world with ravioli, lasagna, and pizza, that’s saying something.) 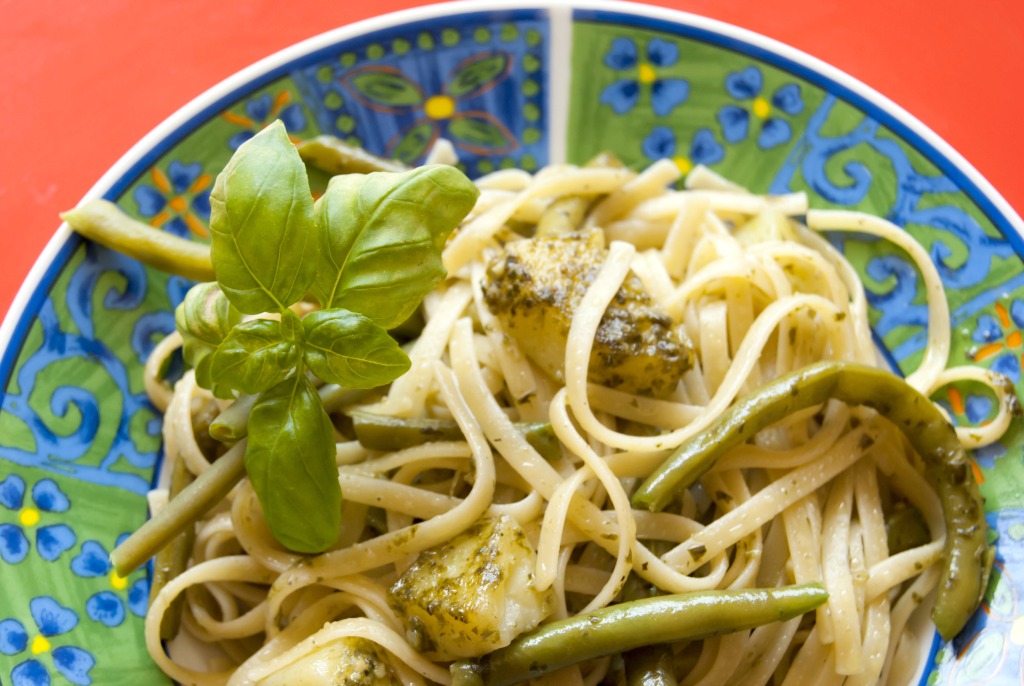 From Genova (Genoa) in Liguria. Maybe it’s no surprise that the Mediterranean port city of Genoa, the birthplace of Christopher Columbus, is known for its freshest of fresh seafood. Wherever you go in the region is less than two hours away from the sea.

But did you know that aromatic herbs and country-style vegetables are major in Ligurian cuisine as well? Linguine tossed with potatoes, peas, and pesto ~ a basil sauce original to Liguria now savored throughout the world ~ is an excellent example of this flavorful fact.

Now then, you have before you a world of choices that are beyond tasty.  Fresh seafood, rich risottos, satisfying desserts …! So here’s a question that may be hard for you to answer  (but there’s no way you can go wrong):

In which region would you begin your Northern Italian cuisine tour? Leave a comment below.

~~~~~I'm Melodie, a destination-inspired storyteller and good food adventurer. Traveling, to experience the wonder of other cultures, has been my lifelong passion. Now, I want to share what I've learned so you, too, can nourish your traveler's heart, explore the world, and eat crazy good food on the regular. It's like this...

She’s like a trading ship that sails to faraway places
and brings back exotic surprises.
Proverbs 31:14