Bond Over The Bean Superbowl Breakfast in Mesilla, NM 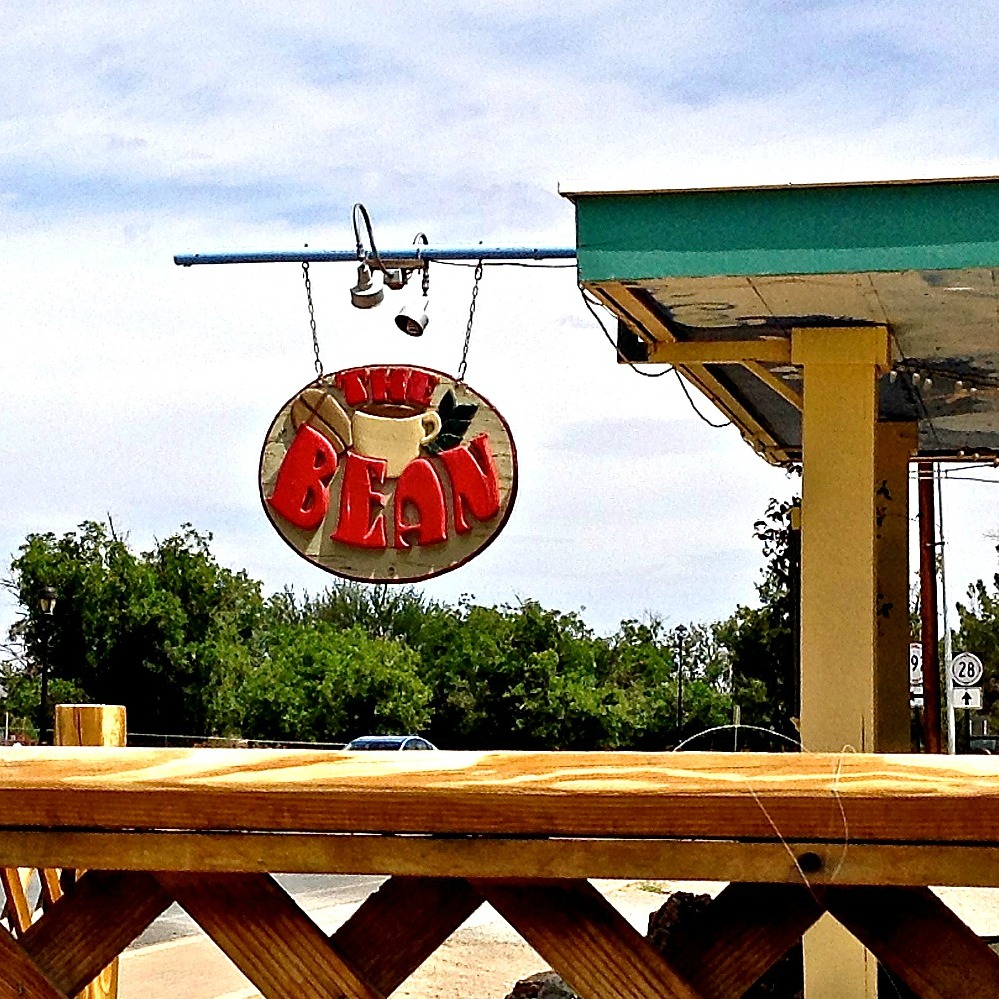 The later in the day it gets, the more hectic your day can become.

That’s where The Bean comes in. Like preventive maintenance, an early morning meal at this Mesilla café can feel like a mini-retreat. And that delicious breakfast comes in a variety of sizes.

Take, for instance, the fresh-baked goods that The Bean’s bakery chef prepares early in the day, every day. Any of these combined with a cup of coffee, chai, chocolate, or tea would make a great light breakfast.

If there’s one hitch to making this happen, it’s that you’ve got to get there early in the day, too. Because by 10:00 am ~10:30 am at the latest ~ early-bird fans of The Bean will have stopped by and that pastry case will be half-empty.

That’s how it was when L. and I visited The Bean for breakfast a short while ago. 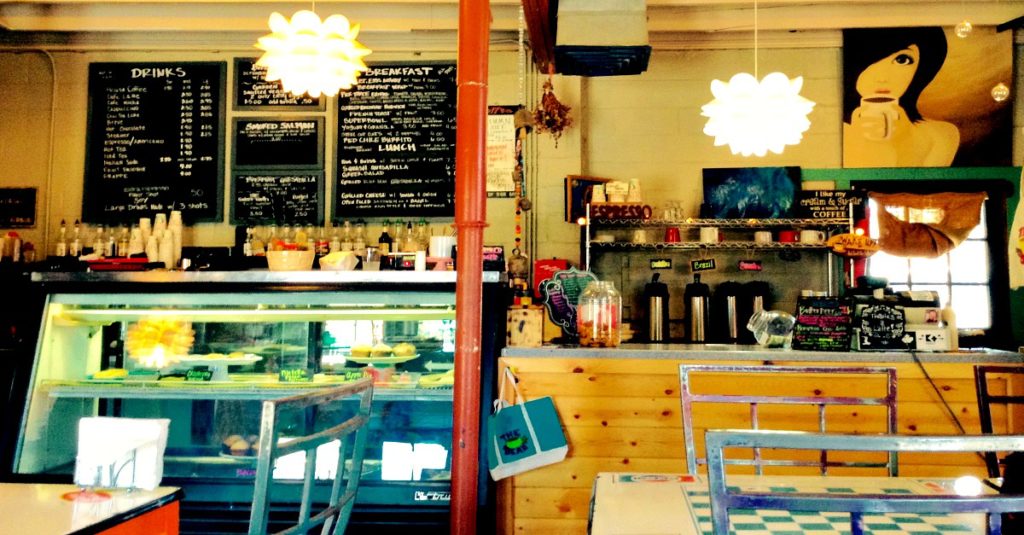 Thank goodness, we had come for the Hungry Man-style of breakfast rather than the Continental. So that almost-empty display case shouting, Sorry, you missed it again! didn’t phase us at all.

The sight of The Bean’s giant blackboard menu actually encouraged us. 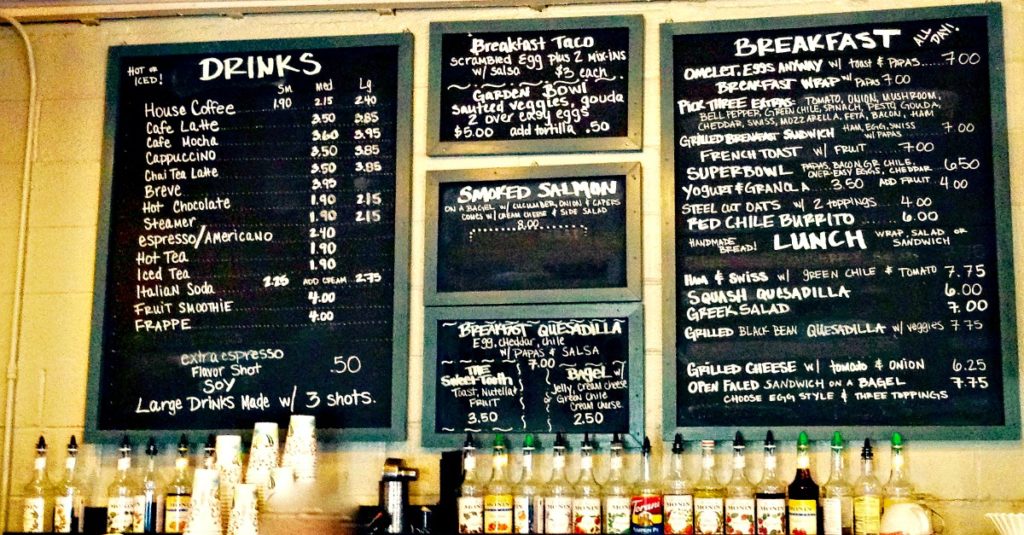 It promised several varieties of happiness. From quesadillas to tacos to smoked salmon on a bagel with cream cheese. That last item, back in the day in New York City, was once a “dream breakfast.”

That’s why I opted to have my happiness served in a bowl. In a Superbowl, to be exact. The menu described the dish as a concoction of as “papas, bacon, green chile,” and some other very good things.

Frankly, they had me at  the word “Super.”

And what did Mister K order?

L. is big on breakfast, that’s one of the reasons we were there. I knew he’d find something on The Bean menu that would suit him just right. And true to form, even though this was his first time there, he made his order right off: the Omelet, Eggs Any Way with toast and papas.

Orders in, we sat down. L. nursed his coffee and I looked around.

The work of local artists in vibrant colors decorate the walls and artsy light fixtures hang from the ceiling. 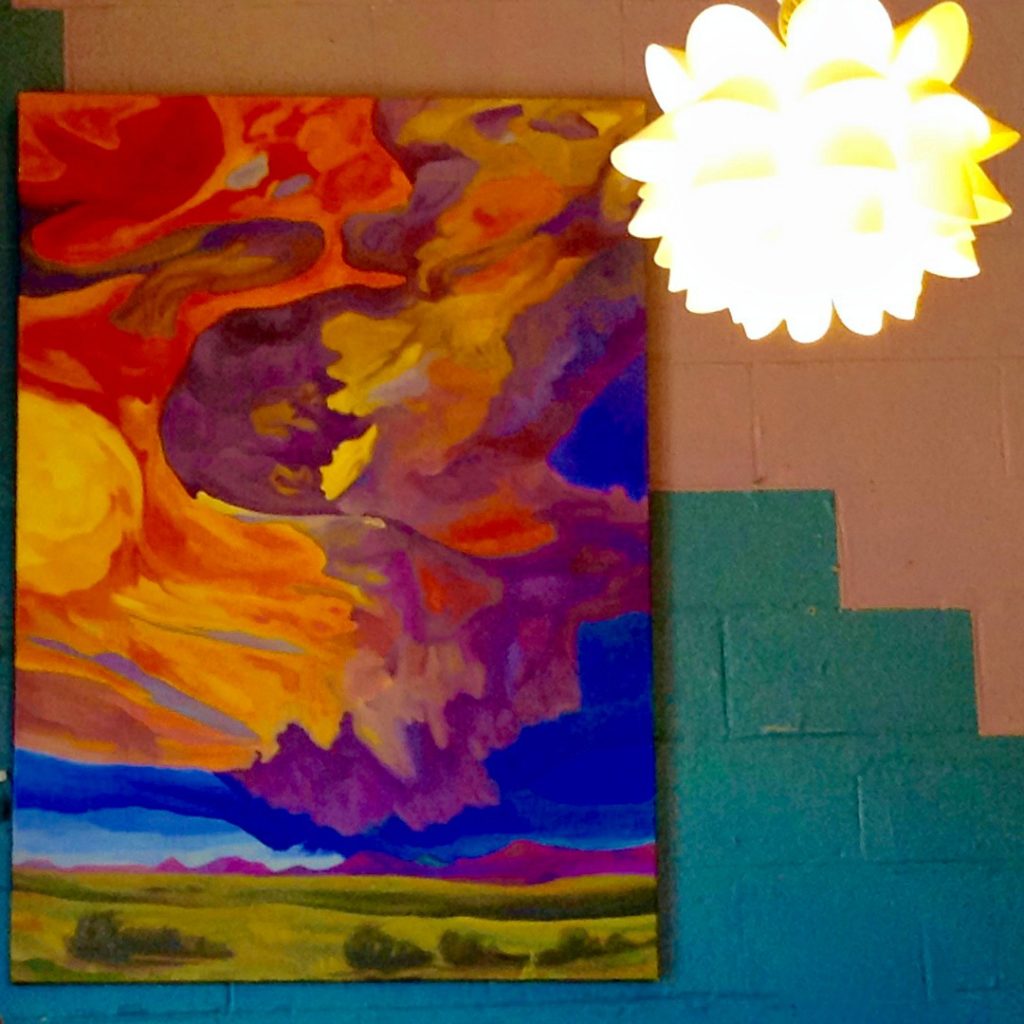 The atmosphere was everything you could want to make your morning go as smoothly as possible. To make your first conversation of the day go smoothly as well.

In fact, most of the other patrons were sitting in pairs at the tables on the edges of the main dining room, lost in conversation.

I smiled when I noticed we, too, had opted to carve out a space of our own against the wall, too.

Oh, yeah, there was this one guy who sat with his laptop at a large farmhouse table in the center of the room. But he was there to work, not to talk.

Seeing him reminded me of the other reason I had decided we should go for breakfast at The Bean.

It was because I wanted to talk. To this Very Important Person in my life.

And talk we did, face-to-face, eye-to-eye. No, I don’t recall the particulars of what we talked about, they’re not important. Yet between swallows of good coffee, I do believe we managed to straighten out our whole deal as husband and wife.

At least enough for that week.

What percentage of the issues leading to broken relationships, I wonder, might we head off at the pass by sitting across a small table from each other, with big cups of un-rushed time and good coffee?

Back to that Superbowl breakfast

No one has ever accused me of eating “like a bird.”

That’s why I did a double-take when the server placed a red bowl in front of me.

This was my SUPERbowl?

But, hold on ~  the eggs over easy topping looked promising enough so I took up my fork and began to excavate. 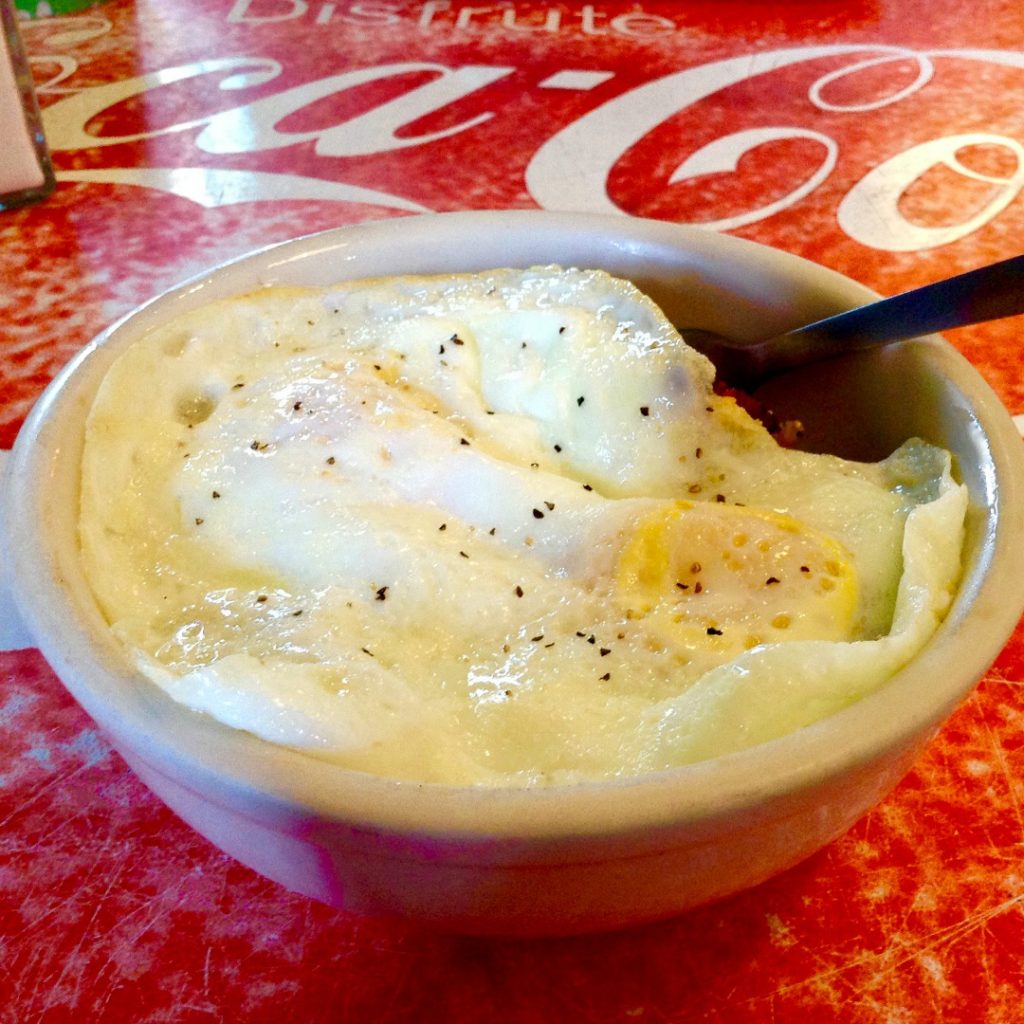 The taste of the Superbowl is MAJOR good.

This dish is like one of those clown cars at the circus, where one after another, 10 clowns step out of a tiny car that looks like it could only hold two.

The Superbowl isn’t wide, but it is deep. And beneath those yummy eggs on top is another world of delicious, filled with potatoes, bacon, green chile and cheddar cheese.

It’s one of those good things that come in (seemingly) small packages.

I ate and ate ~ and was satisfied.

And L’s bacon and egg plate seemed to satisfy him, too, just as I thought it would. 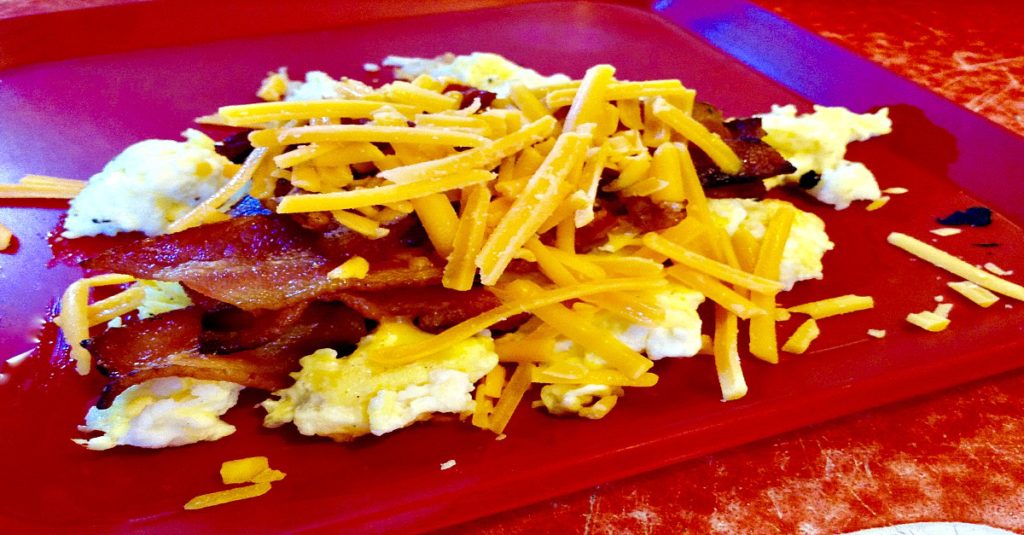 The damage for our two meals came in at under $15. Pretty painless as preventive maintenance goes.

So next time you’re up with the sun, stomach growling, come into Mesilla and turn left at the very first traffic light. You’ll end up in The Bean’s parking lot.

Then go inside and order the Superbowl.

It’s an ideal place to go when you want to yackety-yack with your bestie over breakfast like there is no tomorrow. And drink good coffee.

(CLICK here to learn about another Las Cruces establishment where the coffee is primo.) 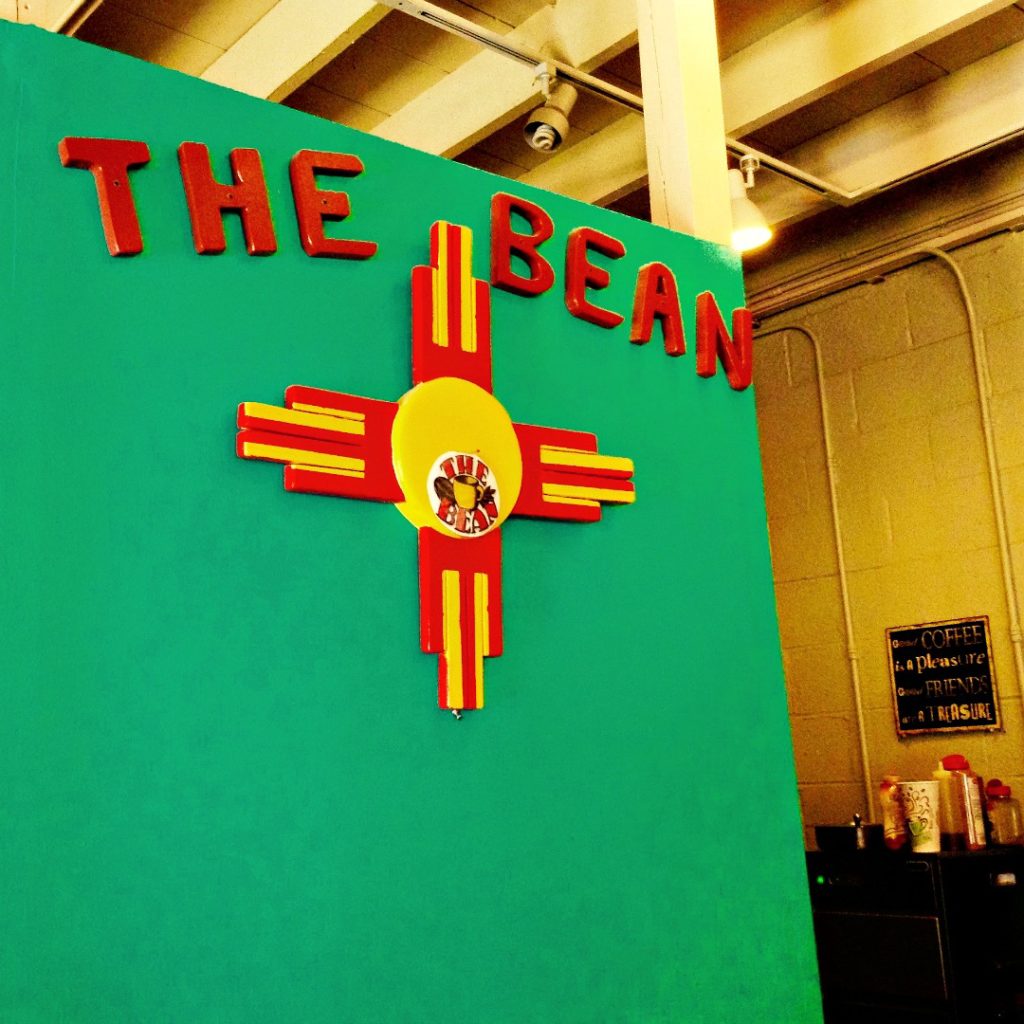