See (and Taste) Israel, THE Place to Get Buff in the Middle East 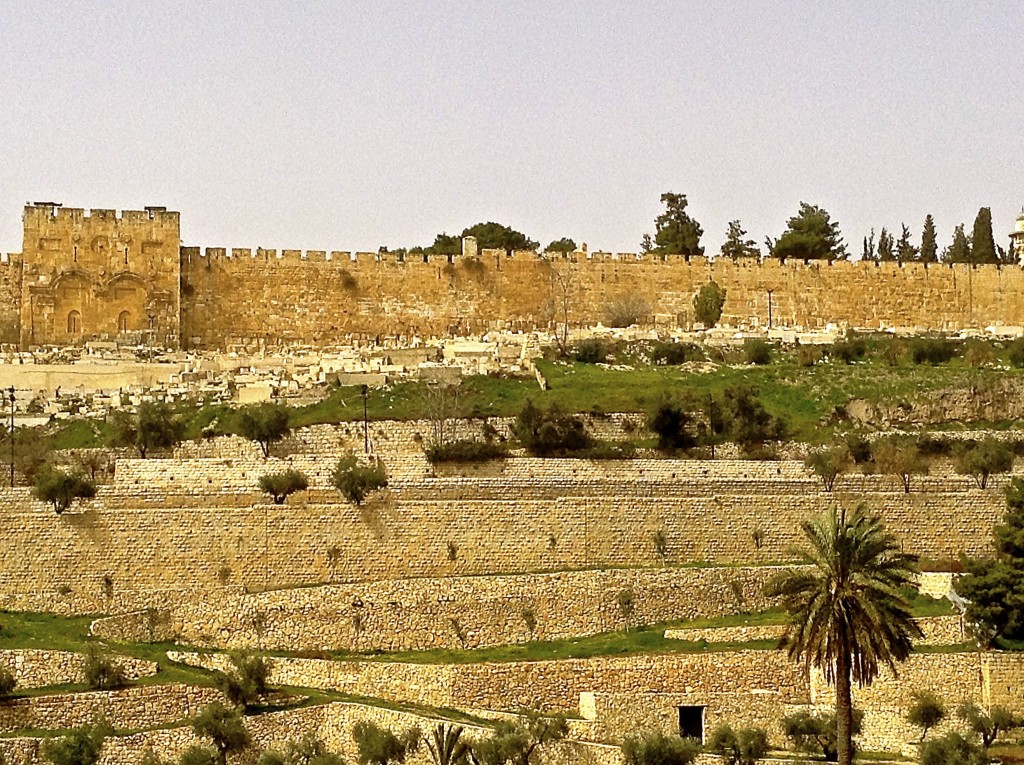 Any way to make a workout feel like playtime is great. ~ Lauren Conrad

The participant bib in my hand made it official: I’d be walking in the annual Bataan Memorial Death March.

With 15 miles of trudging through desert terrain under a New Mexico-hot sun looking me in the face, I was ~ surprisingly ~ feeling more than up for it. 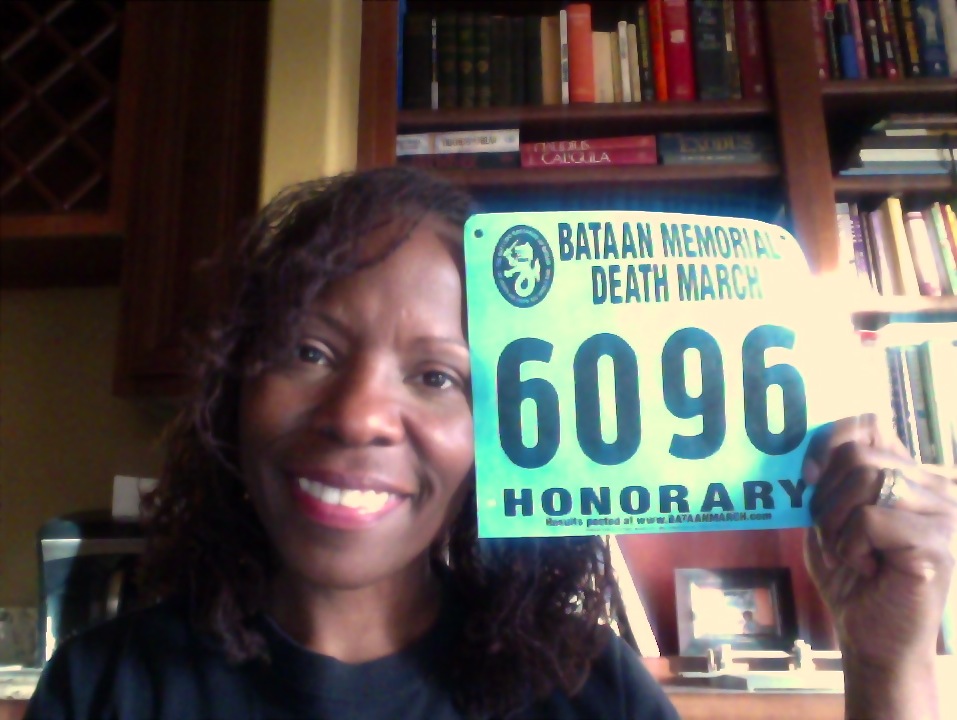 I say “surprisingly” because before I began training for the march, I’d gone hiking only ONCE before in my entire life. And the furthest distance I’d ever run in one shot was the mile and a half the Navy requires for its annual physical training test.

Plus, in the midst of training, I spent two weeks in Israel on a Bible-centered tour.

So how IN THE WORLD could your body STAY IN GREAT SHAPE after two weeks of “vacation”?

TO SEE ISRAEL IS TO CLIMB

It’s all those mountains running the length of Israel. Almost everywhere you go is either up or down.

In the north, not far from the border with Lebanon, you climb to the top of Mount Carmel. That’s where the prophet Elijah ridiculed 450 false prophets before slaying them singlehandedly, then prayed for long-hoped-for rain to pour down.

The beauty of the surrounding valleys kept me WIDE-eyed.

My favorite valley view was of Nazareth, Jesus’ hometown, and Mount Tabor (just beyond), where Israelite leader Deborah encamped with her military before battling the Canaanites. 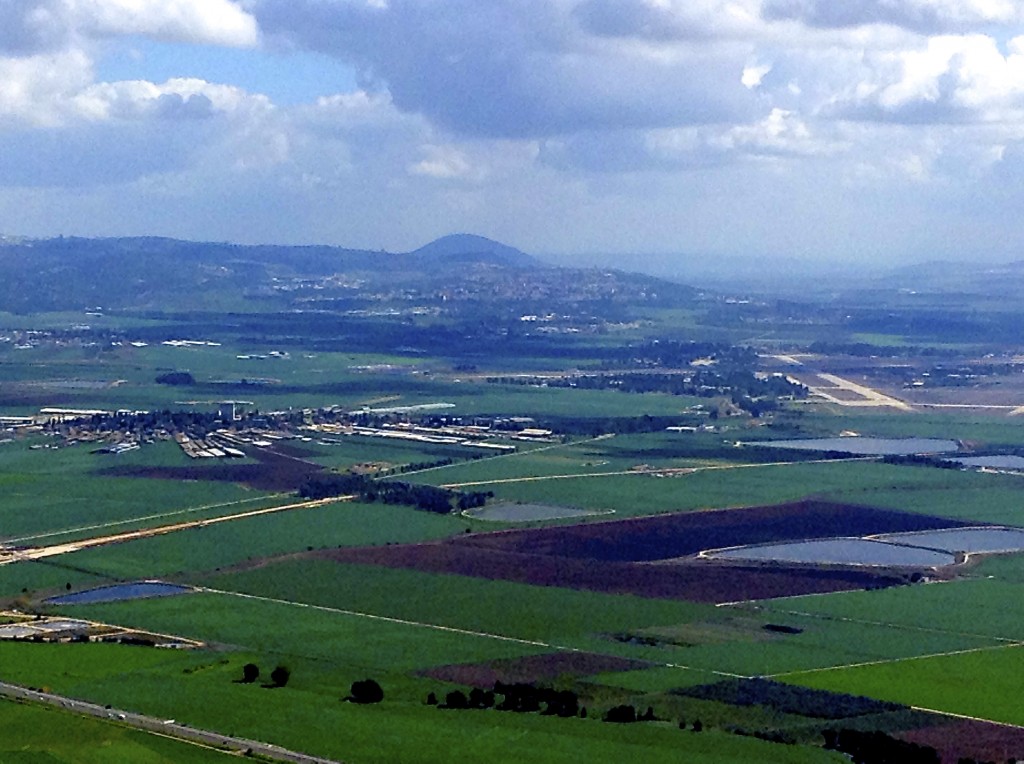 Isn’t it surprising how green it is? Like Scotland.

The next day, we traveled further north, in the direction of Mount Hermon. It’s more than four times as high as Mount Carmel and I would have been happy to hike a portion of it, but …

There was no need.

Our destination that afternoon was a family restaurant where they serve the most wonderful (fried chicken) schnitzel and fries. With the freshest of pita breads. 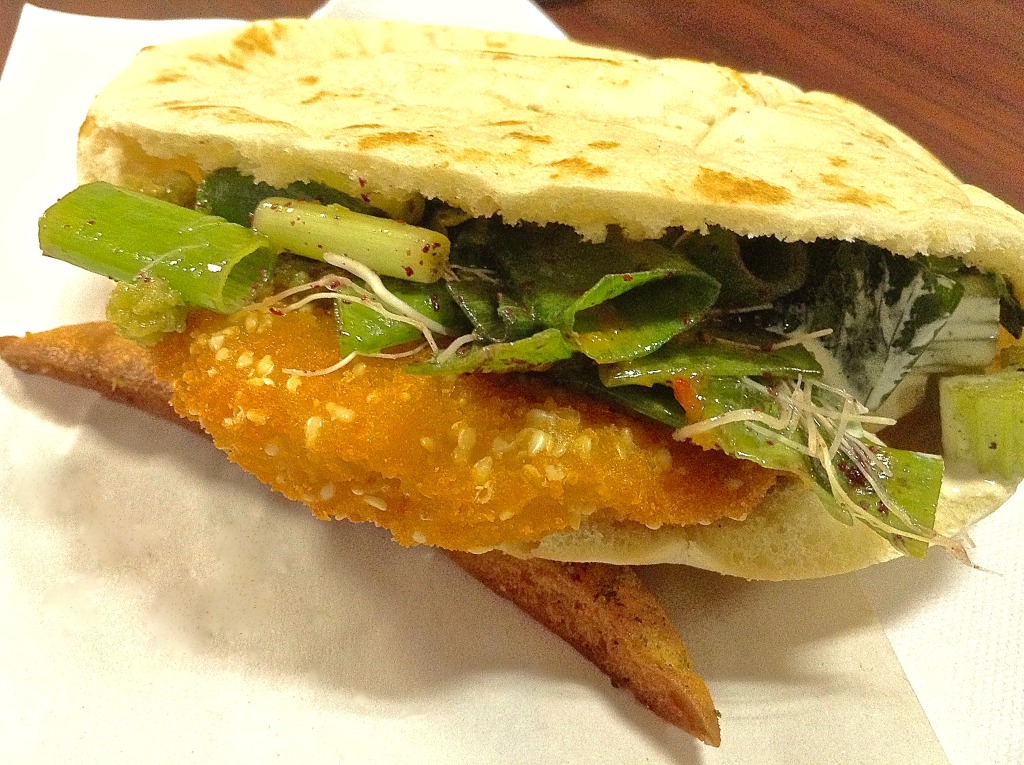 Don’t even let me get started about their baklava.

Not too long afterwards, my legs lifted me to the top of Masada, the once-palatial mountaintop fortress in the Judean desert built by Herod the Great. (The man, it seems, was ALWAYS building.)

Maybe you’ve seen the movie about the Jewish patriots who came to live there and managed to hold off a siege of 15,000 Roman troops for several weeks before committing suicide to prevent their capture.

I knew the story, so I was more than enthusiastic about taking the long and winding walk up the mountain ~ 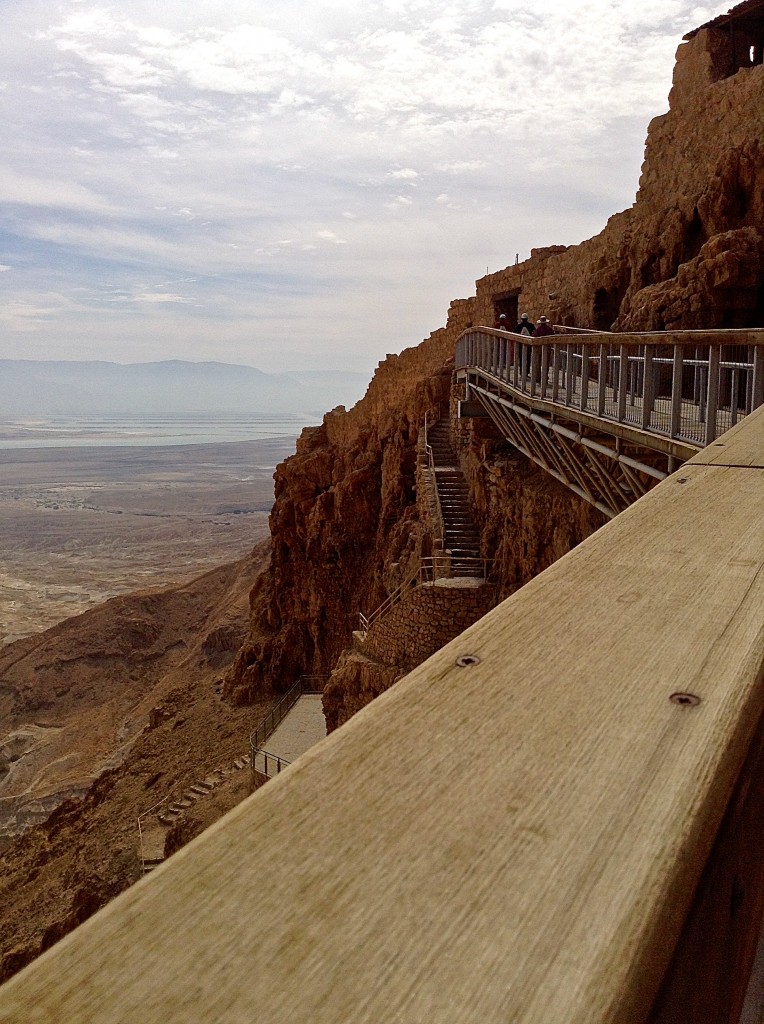 But turns out I didn’t have to. Took the available sky tram instead, much quicker.

Still, I clocked more than a few miles wandering around that enormous compound. 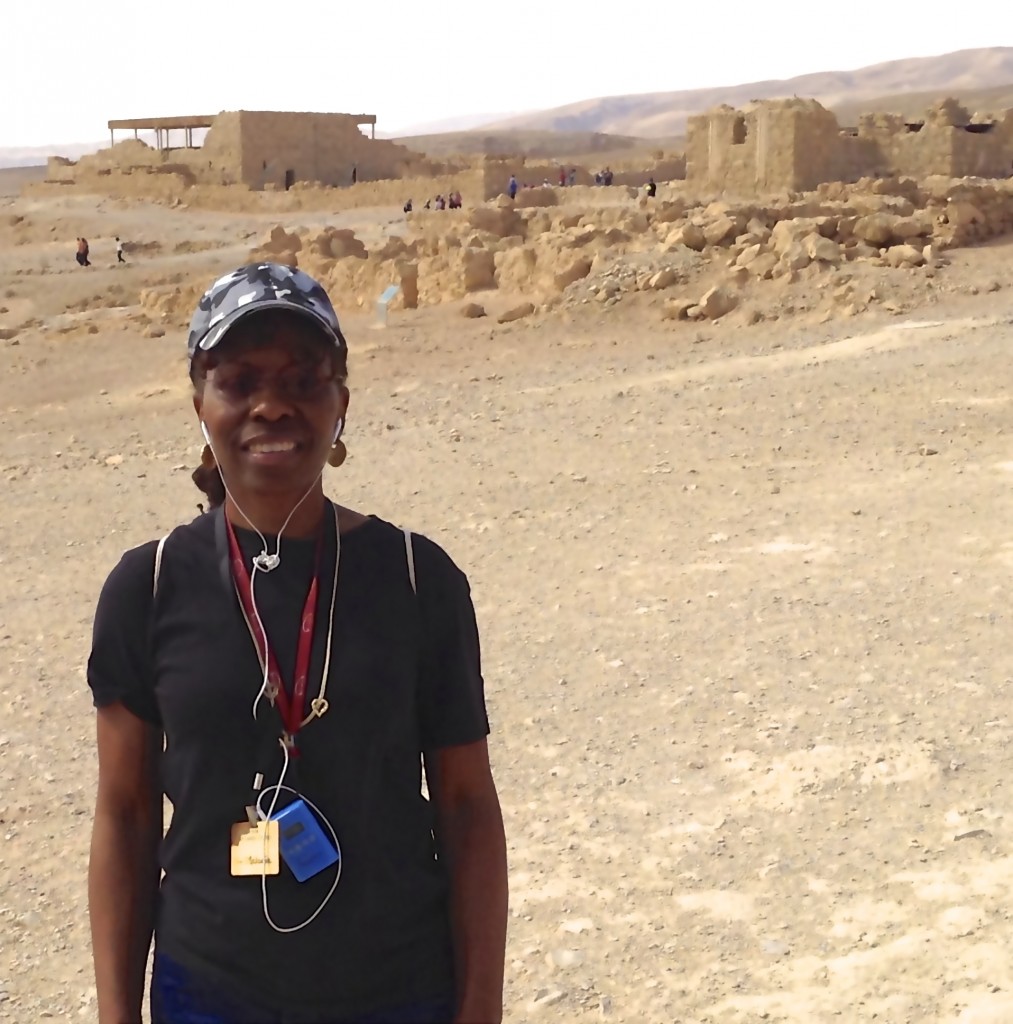 VIEWS TO REMEMBER FROM ATOP MASADA & THE WILDERNESS

From the top of Masada, you can see En Gedi oasis (that small dark area left of center). You also have a terrific view of the Dead Sea, a body of water which ~ I found out later when I floated in it ~ looks a lot prettier from far away! 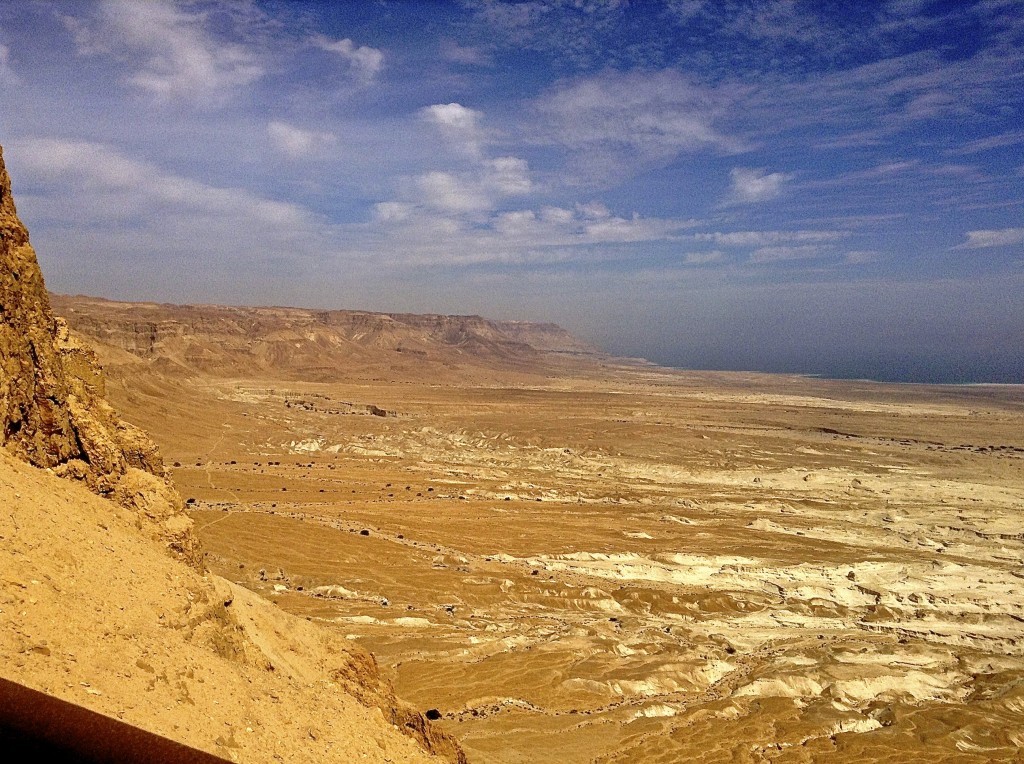 Yet the Judean wilderness was the treat of the day.

Have you ever seen masses of sand and rock like these? 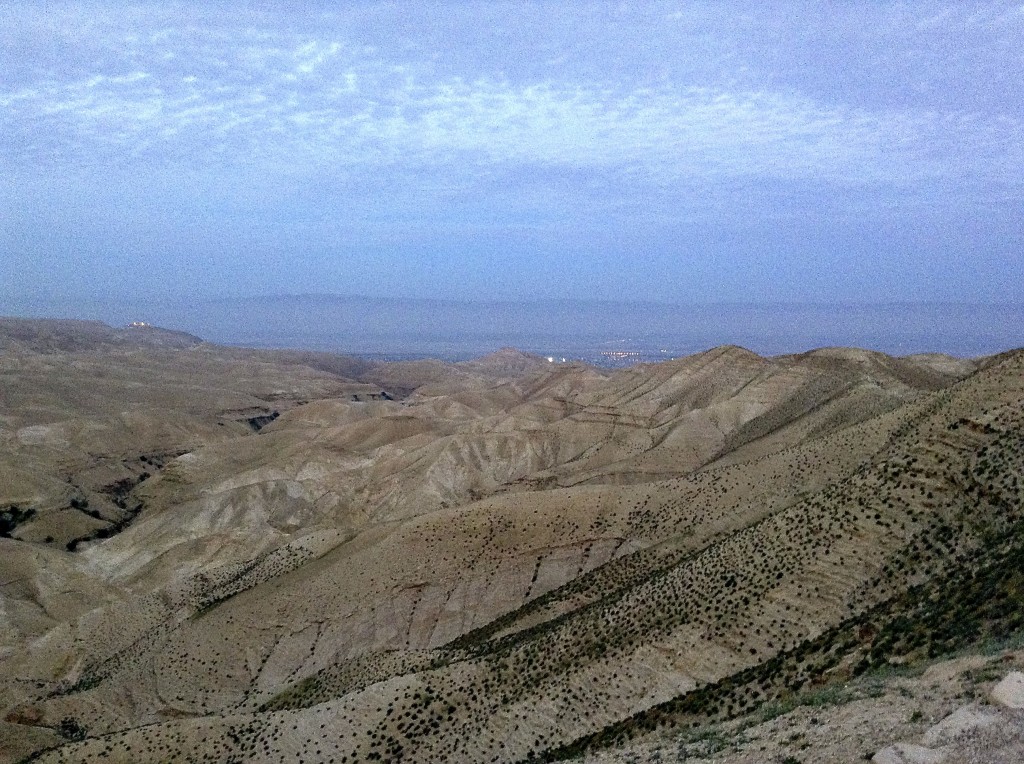 So stark and HUGE. This place John the Baptist preached in and Jesus was tested in is serious business. Any man or woman left alone in a place like this would find out QUICK who they are. And Who God is.

A little scary, yes. But beautiful.

This hiking all over Israel continued in the hill country of Judea. Bethlehem was hill upon hills, with homes and gardens built on terraces.

Then I exercised some more when we visited New York City on the way home to New Mexico. That’s where Hubby L. and I spent a few days walking from the east side to the west side, climbing up and down subway steps!

What is the most physically demanding (but worth it) trip you’ve had?