Salud de Mesilla Paleo Lunch, Not for “Paleo People” Only 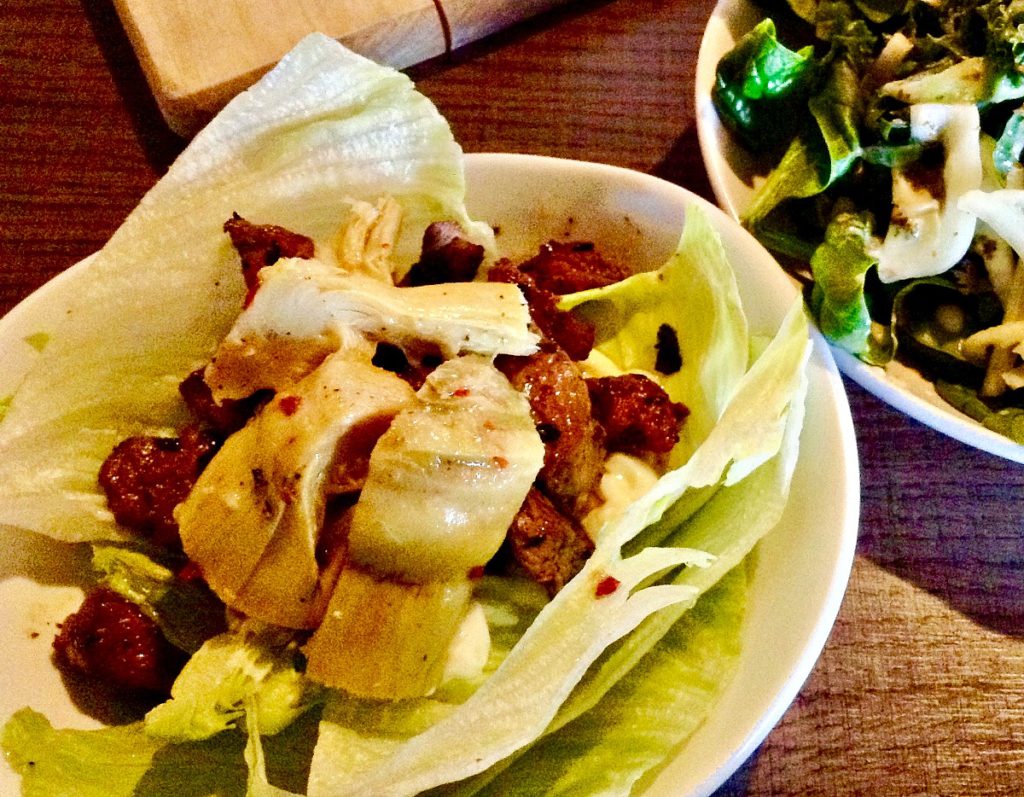 You don’t have to “be” Paleo to luv the Salud de Mesilla Paleo Lunch.

Some people say the Paleo approach to eating means not eating grains, dairy, or legumes. They define Paleo by what it isn’t.

I’d rather define Paleo by what it is: a wide world of food left alone, for the most part, to taste as nature intended. Kind of like a big screen movie starring an international cast of veggies with the most nutrition-rich proteins and fats in the supporting roles.

That makes any well-prepared Paleo dish one most anyone with an appetite can enjoy. Right?

Anyway, that’s the question that crossed my mind before I had my first

I’ve been enjoying Salud de Mesilla for some time now, since the restaurant’s opening in 2016.

Yet my first experience with the Paleo Lunch came only weeks ago.

From the moment Hubby L. and I walked through the door, it was a lot of the same old, same old.

But this was one of those cases where the same old, same old is a very good thing.

For instance, we got the same old service at the door from a gal who greeted us with a real smile. The server who took us to our seat seemed truly happy to have us there as if we had come to his place for a visit.

Then, along with our menus, he brought the same old (pretty!) rainbow bread to the table. 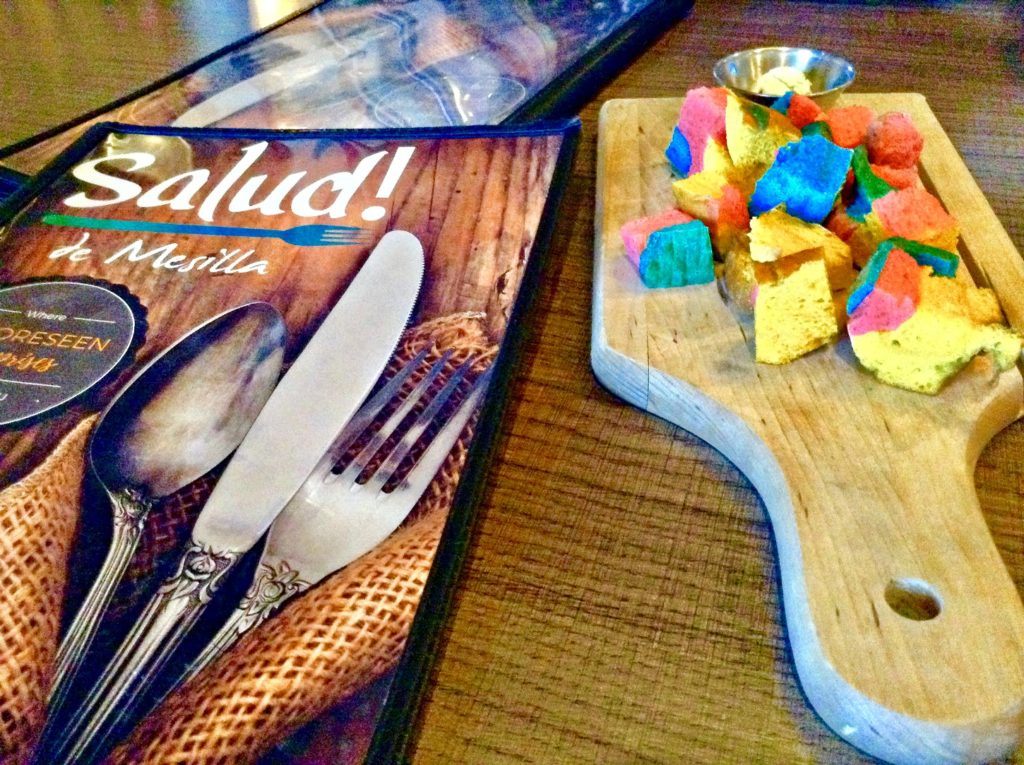 We appreciated Salud’s enveloping us in the same old ambiance as before as well.  The kind that makes you believe that whatever your day was until now, it’s about to get better.

Would you like some quirky jazz along with your paleo lunch?

A quirky jazz tune was playing, one L. recognized. He bobbed his head up and down to the music as he took turns talking with me and studying the menu.

I started to bob my head along with the music, too, smiling, and studied my own menu. Seeing him enjoying himself so much ~ even before the food arrived ~ made my heart sing.

After all, it was his birthday we had come to celebrate so, yes, I liked seeing him serenaded with his favorite tunes. That was a nice touch I could not have planned.

What was new this time was seating in the bar area, where two large screens were on. 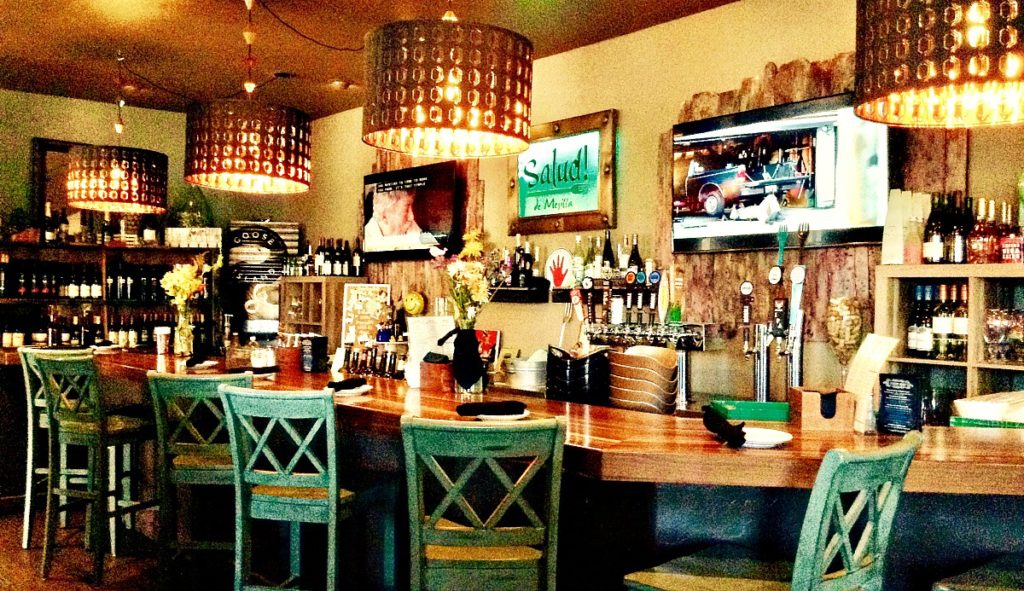 One of the screens featured a sporting event because, well, this was the bar area. And the other one was tuned to the Food Network because this was a restaurant.

There I sat with my menu, zeroing in on the Paleo Lunch, and celebrity restaurateur Guy Fieri was on screen, sampling another eatery’s signature dish.

How I decided on the Salud de Mesilla Paleo Lunch, with the “help” of Guy Fieri

He looked so pleased with what he was eating. Would I soon be in the same happy place with the choice I was about to make? I wondered.

And then I went ahead and made that choice: the Paleo Lunch. 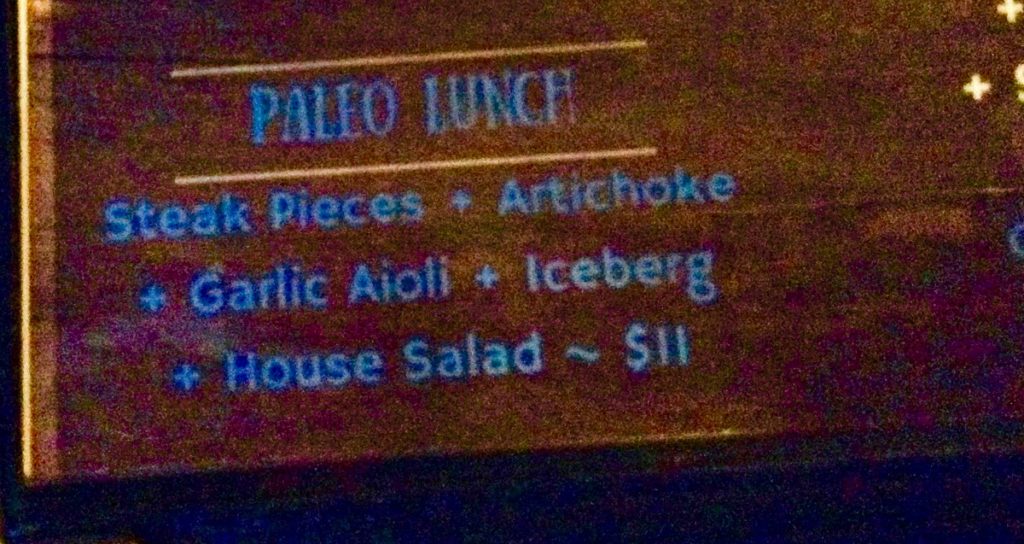 I could only hope and depend on Salud de Mesilla’s track record, that whatever I ordered would be as tasty as the dishes I had chosen before.

That it wouldn’t taste like a poor chef’s idea of a paleo plate, a bunch of unadorned salad greens with a chunk of meat thrown in ~ because that makes it “paleo,” right?

But I needn’t have worried.

The waiting time flew by, with all of our mutual head bobbing and laughter. It seemed only minutes had passed when the server arrived with our orders.

L’s plate was the Arrachera & Eggs, Salud’s version of steak and eggs with hash browns.

The main portion of my Paleo Lunch came with grilled steak pieces served on a bed of warm iceberg lettuce.

With marinated artichokes as well. 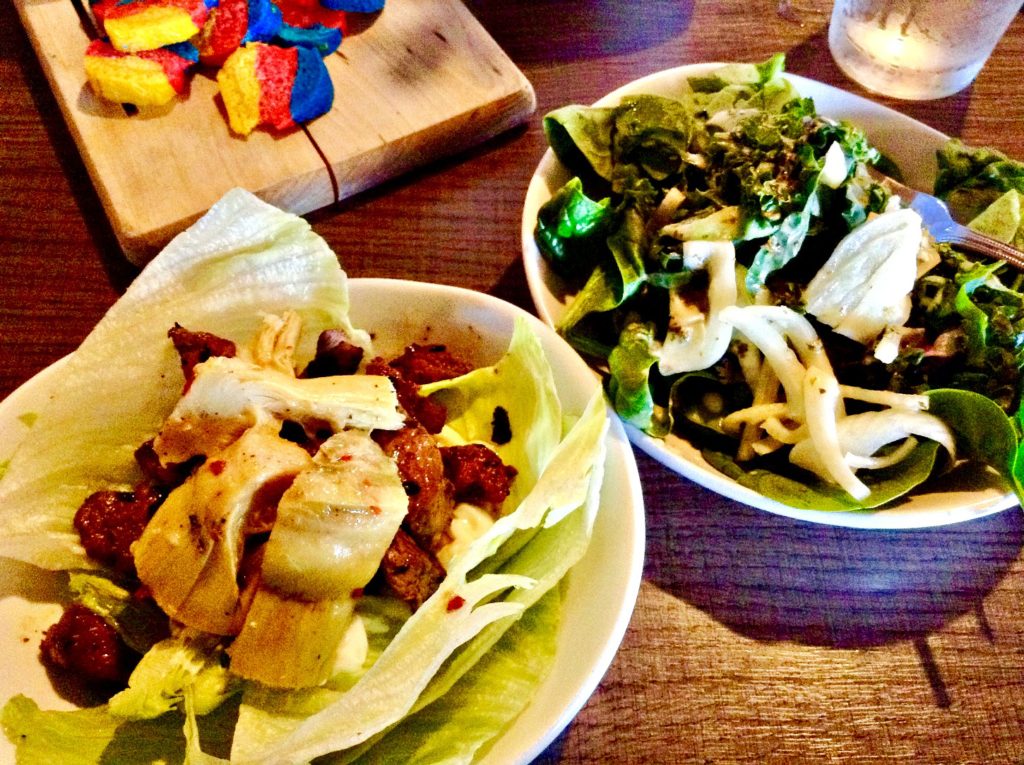 The grilled meat satisfied my hunger for something savory. The lettuce in place of bread or tortillas made it filling without any heaviness.

The garlic aioli was icing on the steak.  I mean cake.

But those artichokes in the middle of it all made the difference in this dish.

Maybe it was because I was fresh from a visit to Italy, where artichokes had been in season.

I had eaten them everywhere, including Rome. 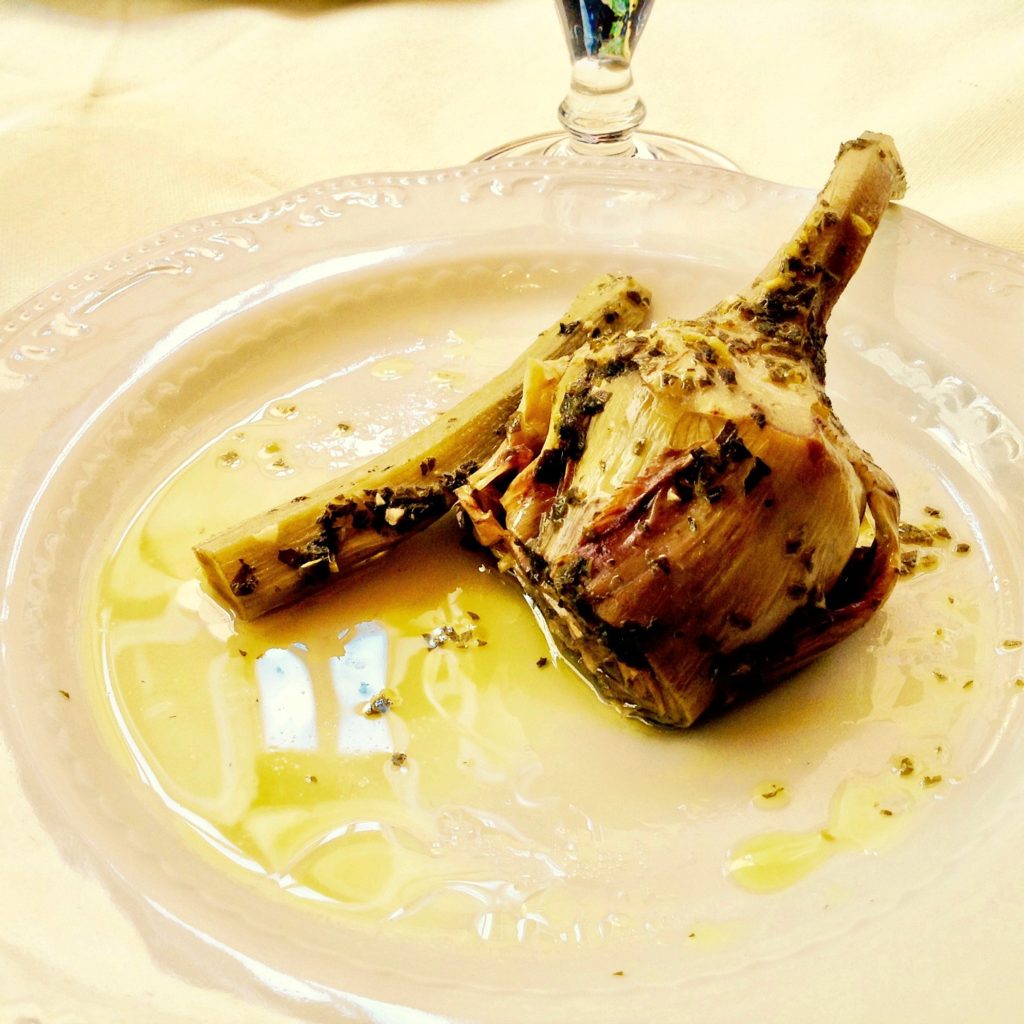 Point is, these artichokes with the steak tasted delicious.

And how was the House Salad that comes with the Paleo Lunch?

It was a mix of “spinach + mint-pickled fennel + pomegranate”  just as the menu had described.

I like it, the fennel adds a certain twang to the mix. 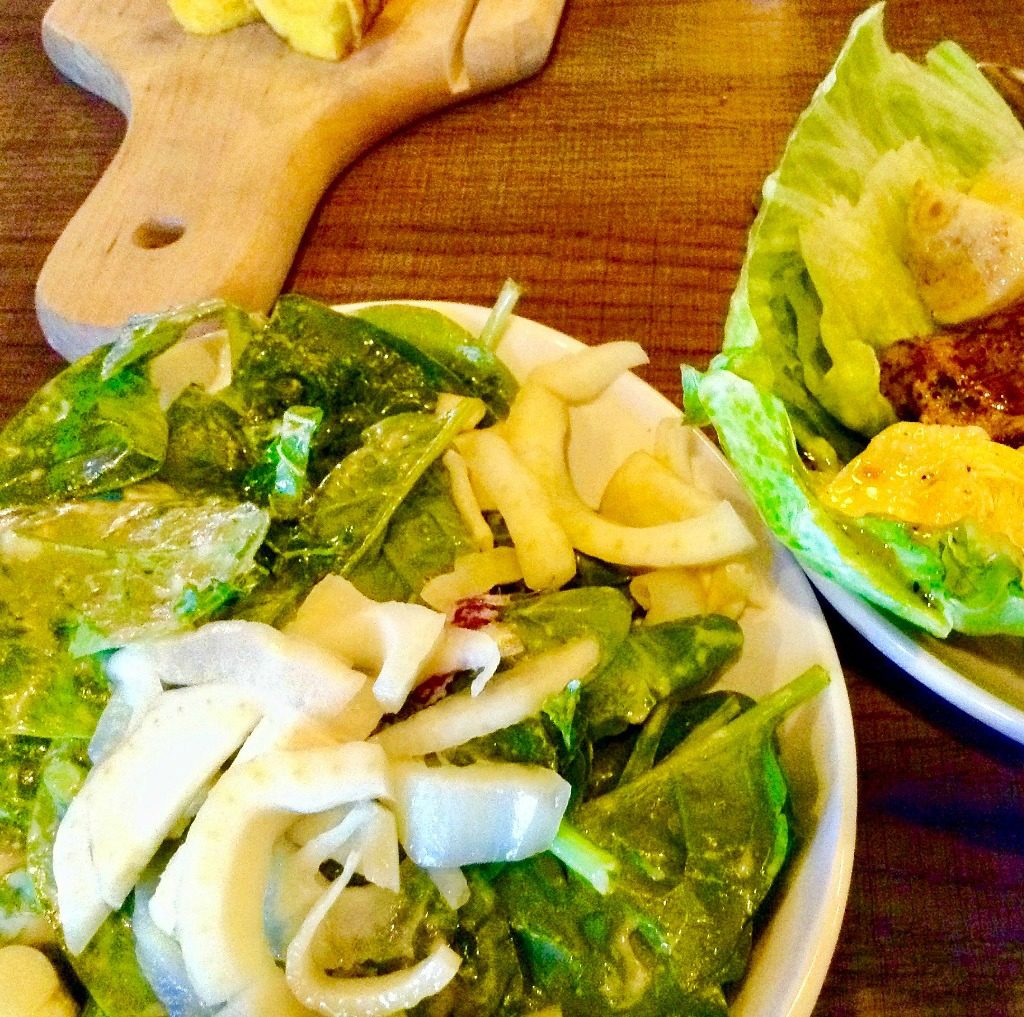 The menu description, I admit, had already won me over before the first bite. I mean, getting your salad infused with pomegranate and mint pickled anything doesn’t happen every day in Las Cruces.

The Salud de Mesilla Paleo Lunch is not fancied-up rabbit food. Bugs Bunny never had it this good.

I returned for another Salud de Mesilla Paleo Lunch experience a few weeks ago. 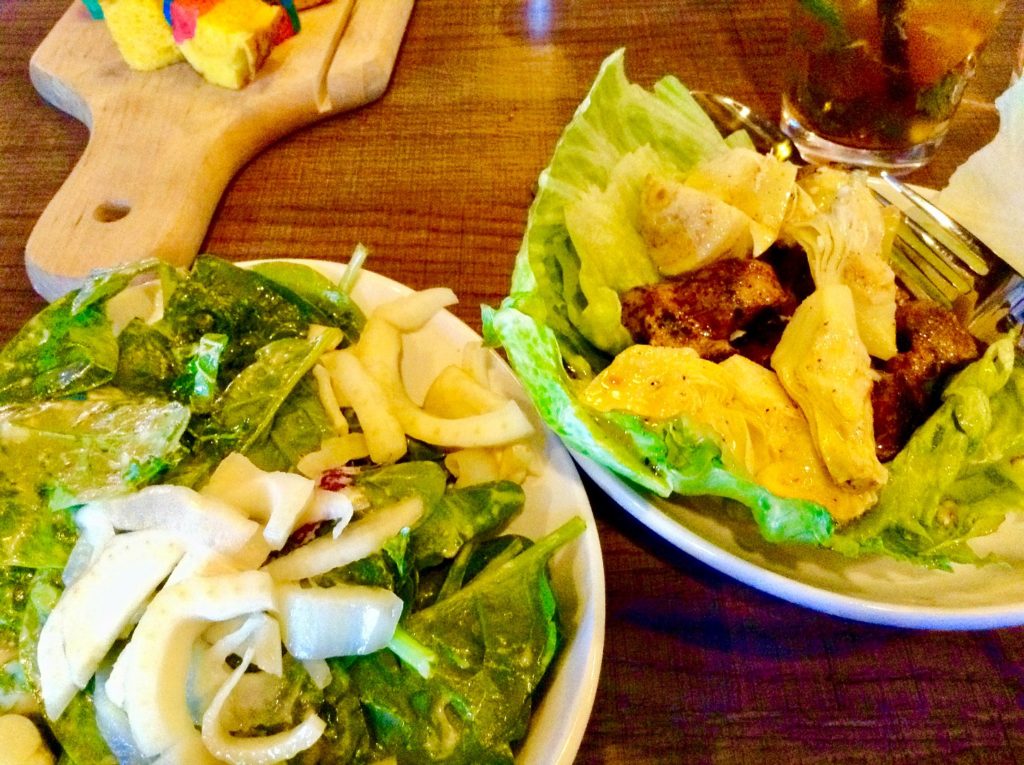 You could say it’s getting to be a habit with me.

But hey, if you dropped 15 pounds within 2 months without making any change other than eating meals like this Paleo Lunch as I have, it could get to be a habit with you, too.

This dish is a natural choice ~ no pun intended ~ for when you’re in the mood for something healthy AND delicious. For when you want something leafy with ALL the trimmings and no bad stuff.

The Salud de Mesilla Paleo Lunch makes a great light meal that satisfies whether you follow a Paleo diet or not.

And it’s proof that in Las Cruces, where great burritos and enchiladas are abundant, not everything most delicious comes wrapped in a tortilla.

What do you reach for first when you’re in the mood for healthy, light, feel-good food? Share in the comments below.