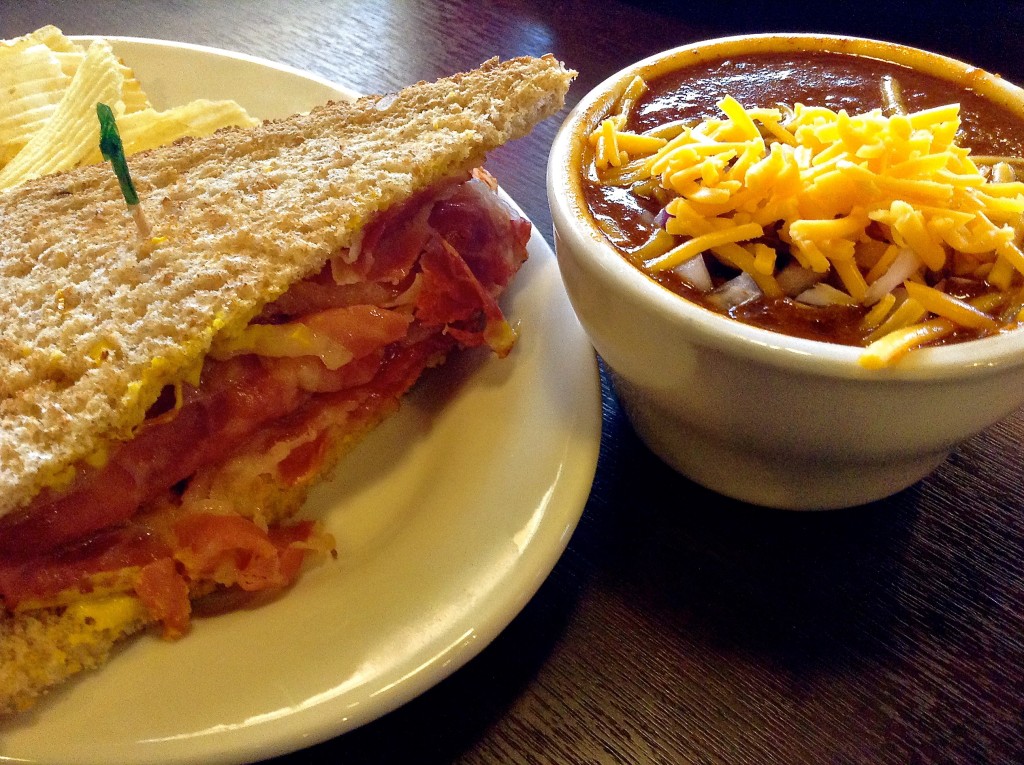 Whoa ~ there goes that sound again. Can you hear it? It’s my tongue doing flip-flops. It has a keen memory and my first experience at Jason’s Deli was a good one. Here’s the story . . .

When my friend, Gavi, proposed lunch at Jason’s Deli, I was all in.

You see, I grew up in Flatbush, Brooklyn, eating my fill of knishes, knockwurst, and bagels at neighborhood delicatessens on a regular basis.

Even as a child, I’d splurge on the occasional egg cream after school. Always vanilla. I’d sit at the counter reading the comic book I’d just bought. And every once in a while, I’d spin myself around on the stool.

So this deli, I imagined, would be like an old friend I looked forward to seeing again.

Liked the interior of Jason’s Deli as soon as I walked in . . . spacious, bright, warm and upbeat.  Then I found out they have free wi-fi ~ another nice surprise. 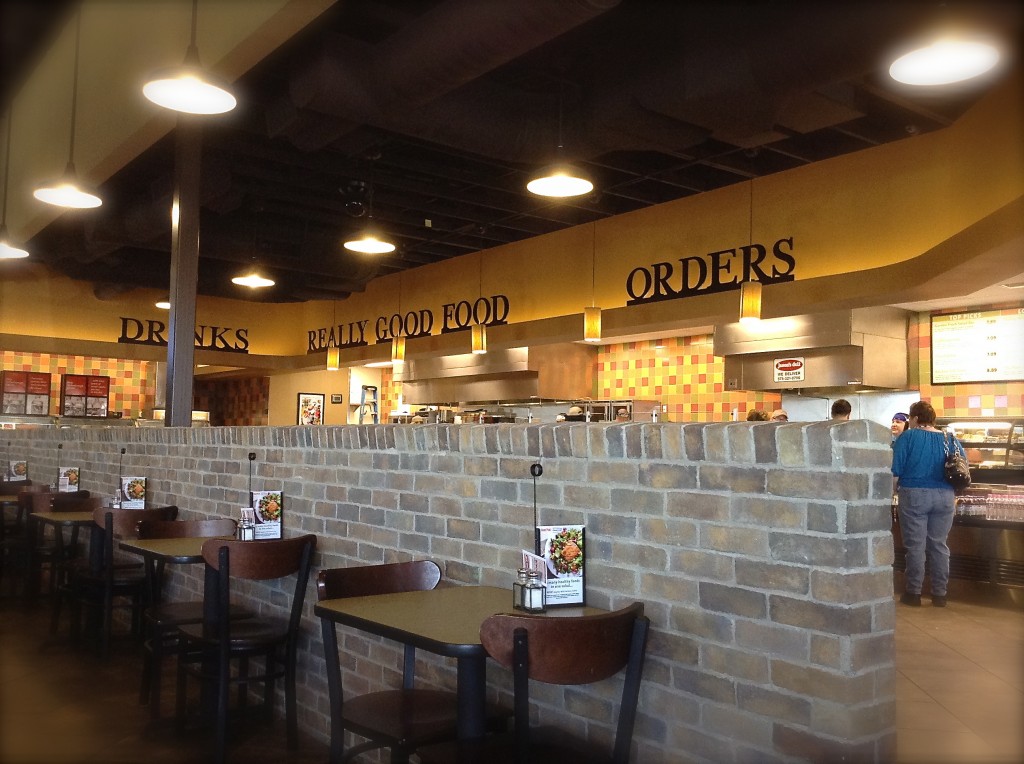 Didn’t see any counter stools, but plenty of cushy booths ~ which, these days, I like even better. I joined Gavi in one of the booths and checked out the menu.

Just after she explained how we order and pay at the counter but a server brings it to the table, her order arrived: a half-sandwich ~ California Club ~ with soup and salad. 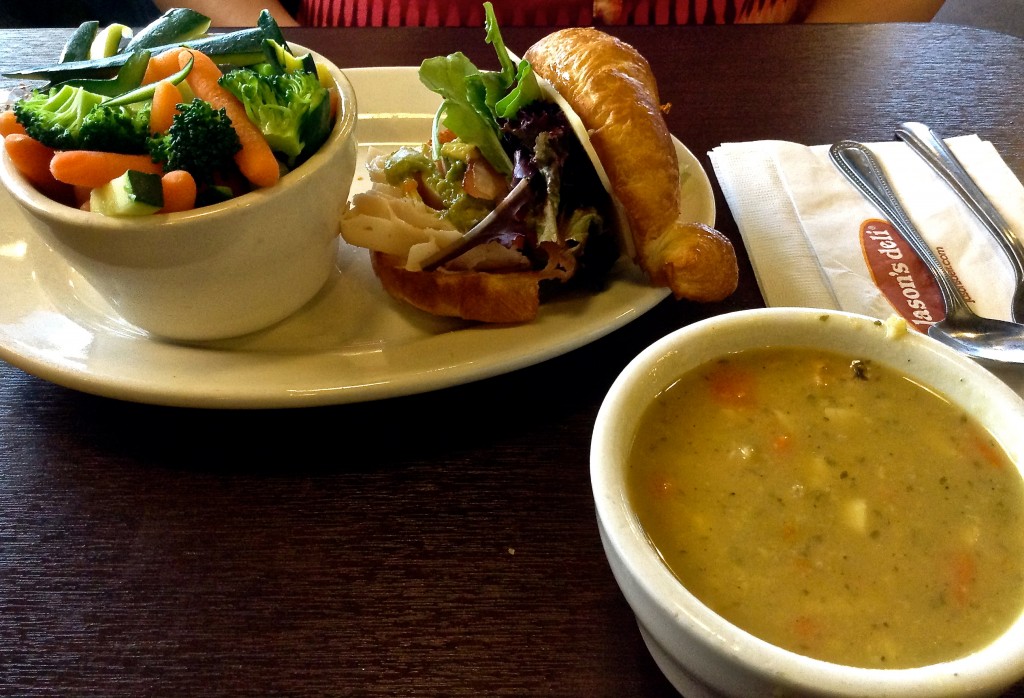 The portion size looked perfect so I decided to go a similar route, with a Hot Pastrami half-sandwich and chili.

Things got interesting when I told the counter-guy I wanted a Hot Pastrami. First, he wanted to know if I wanted sauerkraut.

NO, THANK YOU, I smiled.

Then he offered to add lettuce and tomato.

I said NO, THANK YOU again and kept smiling.

Regional tastes vary a lot, don’t they? I was remembering how food vendors in Northern California, where I lived at one time, routinely offered to drape my hotdog with similar salad fixings.

Jason’s Deli is a national brand aiming, it seems, to make all of us, EVERYWHERE, happy. At any rate, this counter-guy was clearly intent on doing that.

Now, at this point, had he suggested putting mayo on my pastrami, I’d have left the place screaming.

But (thank goodness) he did no such thing.

What can I say?

Pastrami on slightly-toasted rye with mustard “and nothing but” does it for me. A good pastrami sandwich doesn’t need a bunch of frou-frou, wouldn’t you agree?

Anyway, it’s what I ordered, for two reasons:

Order in, I stopped the salad bar where I found an EVERYTHING array of veggies and fruit. I would have gotten some, too, but these cute mini-corn muffins distracted me. 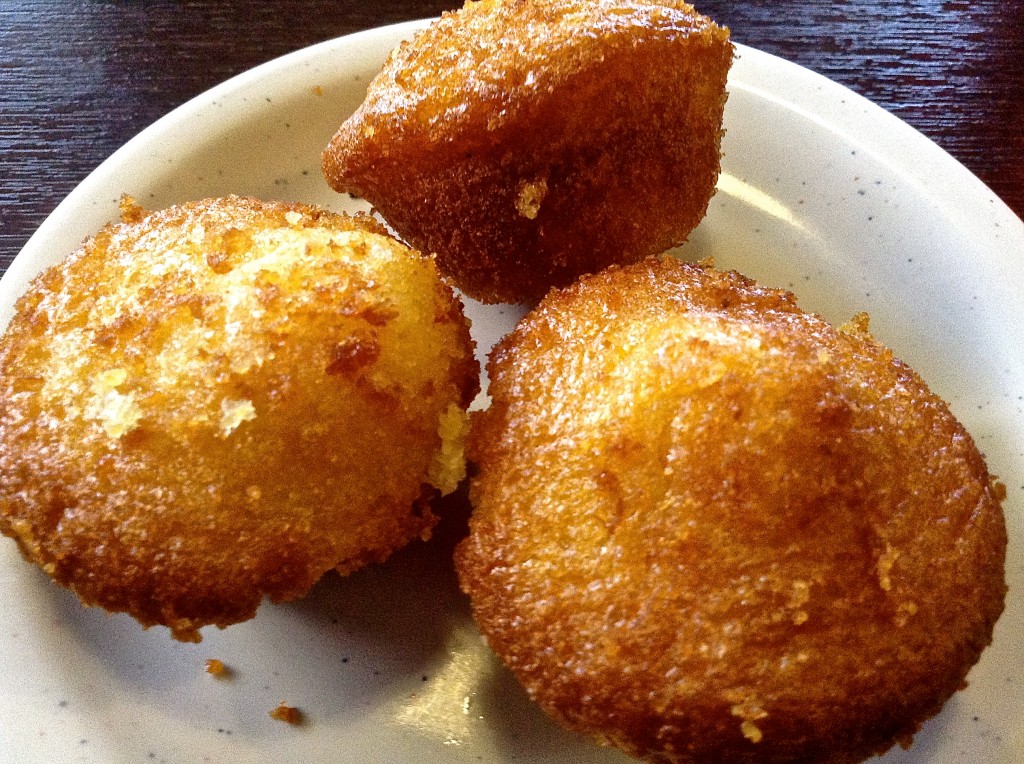 Just after returning to our table, a server came, set down a plate with pastrami and potato chips. Then the chili. They both looked wonderful. 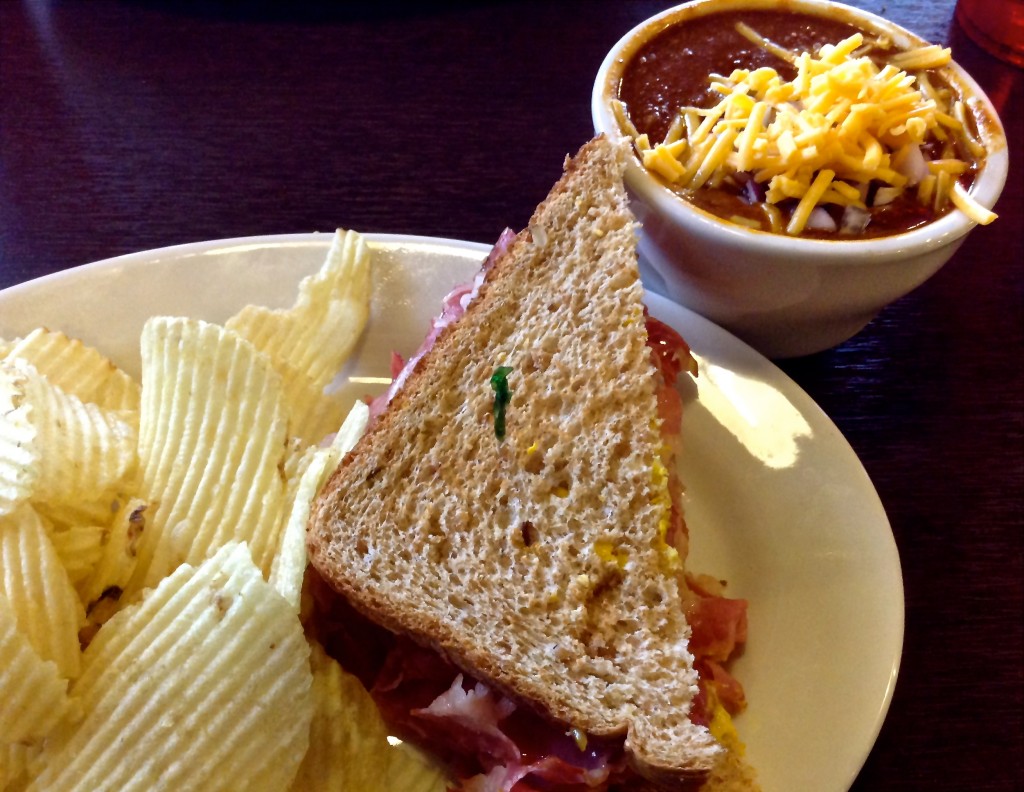 And then I thought: WHAT IF THEY’VE GOT WEAK MUSTARD?  WE DIDN’T-DISCUSS-THE-MUSTARD!

That’s when I remembered why I’d never come to Jason’s Deli before even though I’d seen it multiple times when driving by.  It was a national brand ~ not a classic family neighborhood deli. And a loooooong way from New York.

How could they possibly come close to producing a deli-taste experience anywhere as good as what I was used to?

I’d only be setting myself up for major disappointment.

I was thinking all these things when Gavi asked YOU OKAY? She wanted me to dig in and eat. So I finally picked up my sandwich ~ and took  a bite.

The Hot Pastrami sandwich was lean and delicious. The taste of spicy brown mustard made my made-in-Brooklyn heart glad.

The chili was thick and rich, heavy with cumin, layered with optional cheese and onions.  In a word, yum. 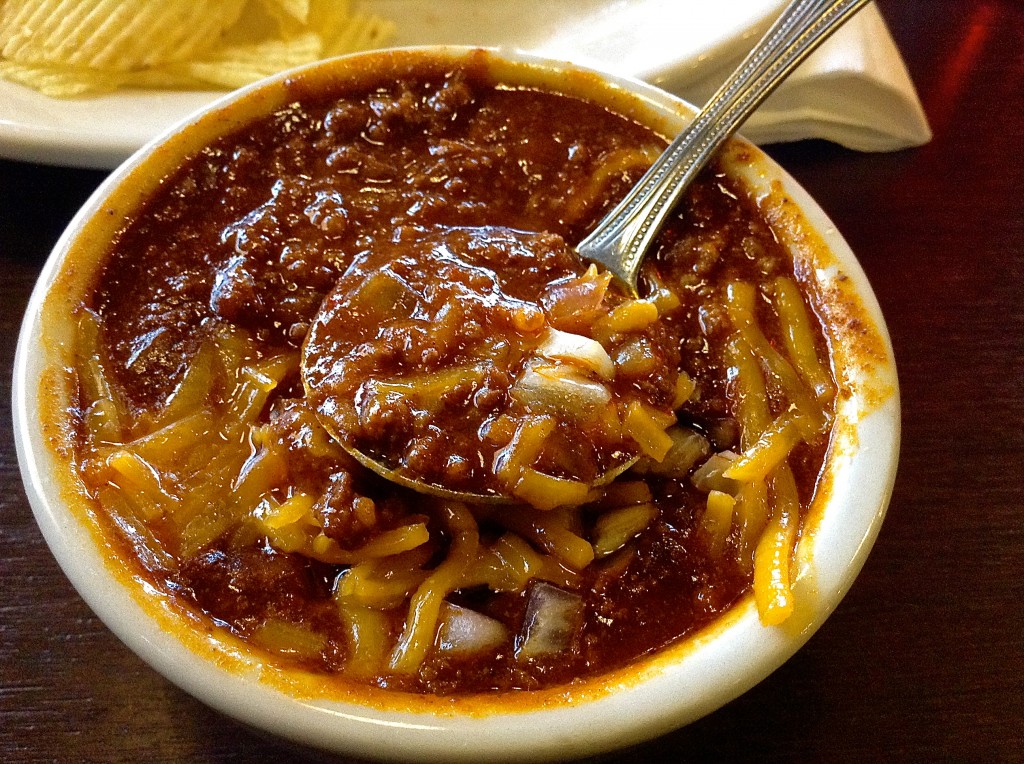 Both Gavi and I left the deli satisfied. Neither of us had room for the free all-you-can-eat ice cream.

The Planned Return to Jason’s Deli in Las Cruces

Ah, but next week I might return to Jason’s Deli with my husband for his birthday. L. is crazy about corned beef on rye and hanging out in big cozy diner-type booths.

Maybe I’ll order the Fire Roasted Tortilla soup and see how it compares with the Spicy Tortilla soup I used to sigh over at Slightly Toasted Cafe, now closed down. And if we talk the time away after eating our sandwiches, we’ll soon have enough room for ice cream.

When was the last time a restaurant meal outdid your expectations? 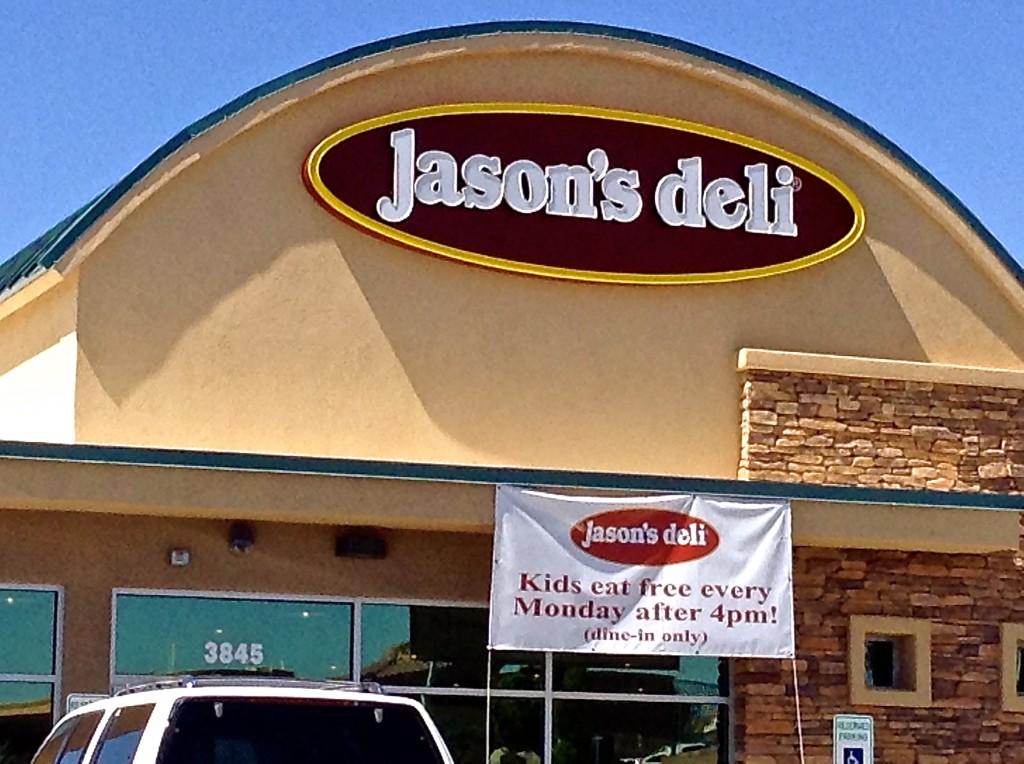