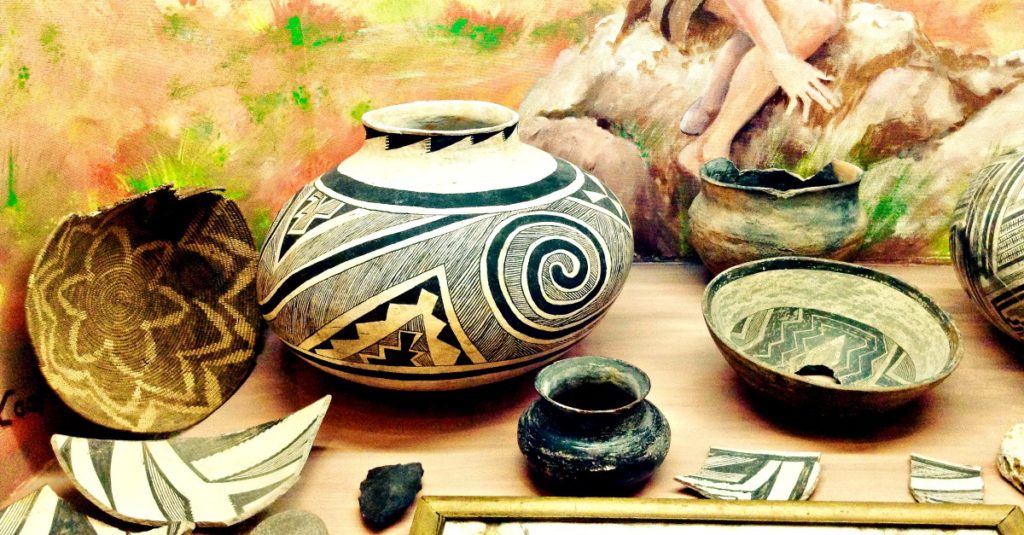 Just when you thought you knew all there was to know about small-town life in the Southwest ~ and, let’s face it, maybe all you wanted to know ~ along comes the Deming Luna Mimbres Museum showing us a little something different.

For instance, you’ve likely read in this or that magazine about how much of New Mexico’s culture is the legacy of the Earliest Americans, Spaniards, and English-speaking Americans who settled here.

But did you know about the Czechs and their contributions to New Mexican culture, both economic and edible?

This pearl in Deming, New Mexico is full of surprises like that. It’s a ramble through centuries of New Mexico history where you never know who you might meet.

. . . it strikes you that there is no brochure to tell you what the Deming Luna Mimbres Museum is all about.

Well, it struck me.

Until I reminded myself this wasn’t any BIG city museum with major collections on multiple levels, like New York City’s Metropolitan Museum of Art.

Clearly, the two volunteers who greeted my husband and me with smiles thought we should see it all, not miss a thing.

Because when I asked what the highlights were, what ONE thing I should see above all others, the older gentlemen didn’t answer my question directly. Instead, he gave me a copy of the museum’s floor plan and motioned toward the exhibition hall straight ahead.

It’s all good, his actions seemed to say.

Okay, fine. Off we went on a self-guided tour to find out for ourselves.

So What IS the Deming Luna Mimbres Museum All About?

It seems to be about some of EVERYTHING.

That’s what L. and I and turned to say to each other at exactly the same time.

Because EVERYTHING is what we saw there. From musical instruments and vintage oil trucks to entire rooms transplanted from their original locations in town. 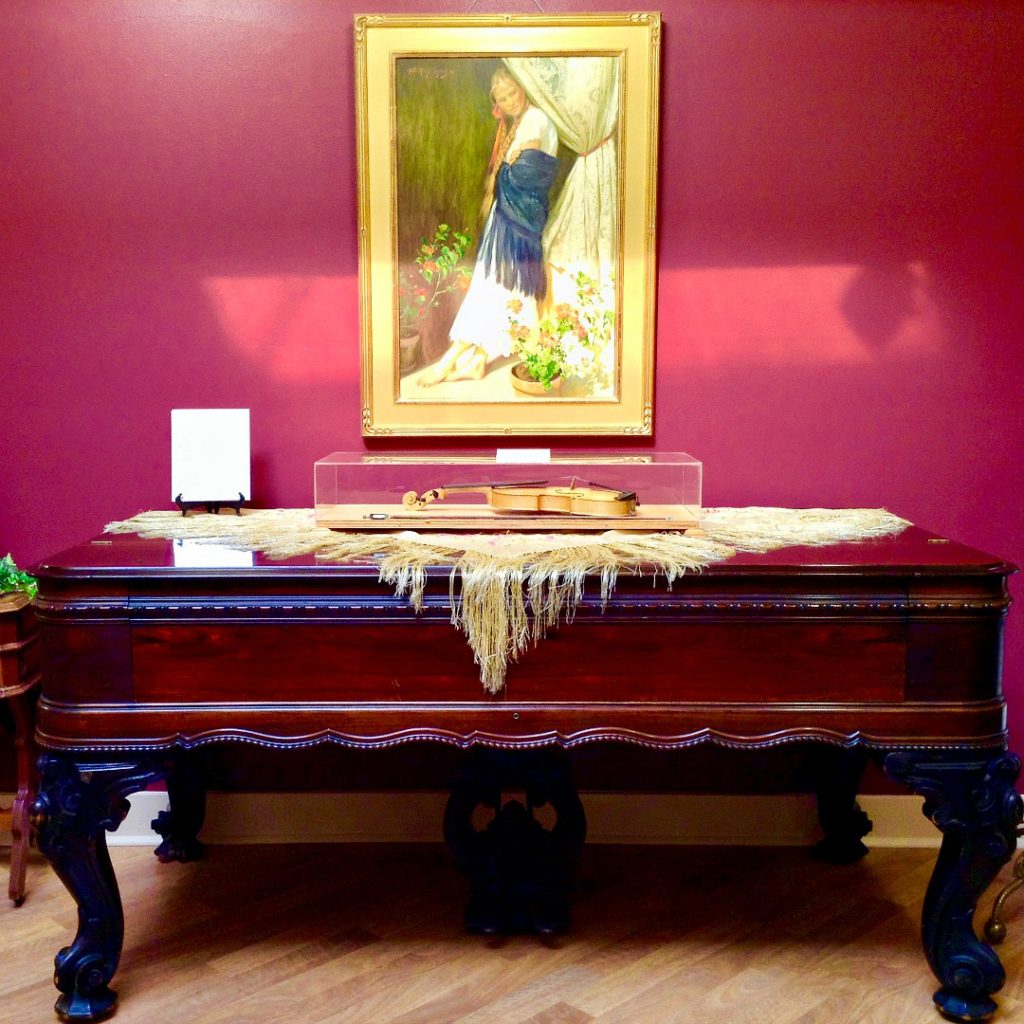 A rare square piano, from the 19th century. 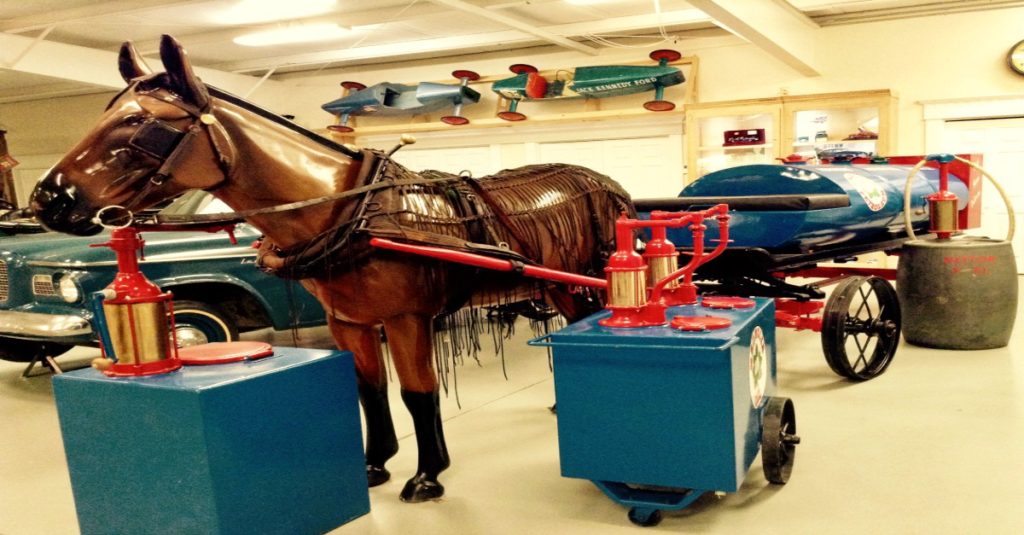 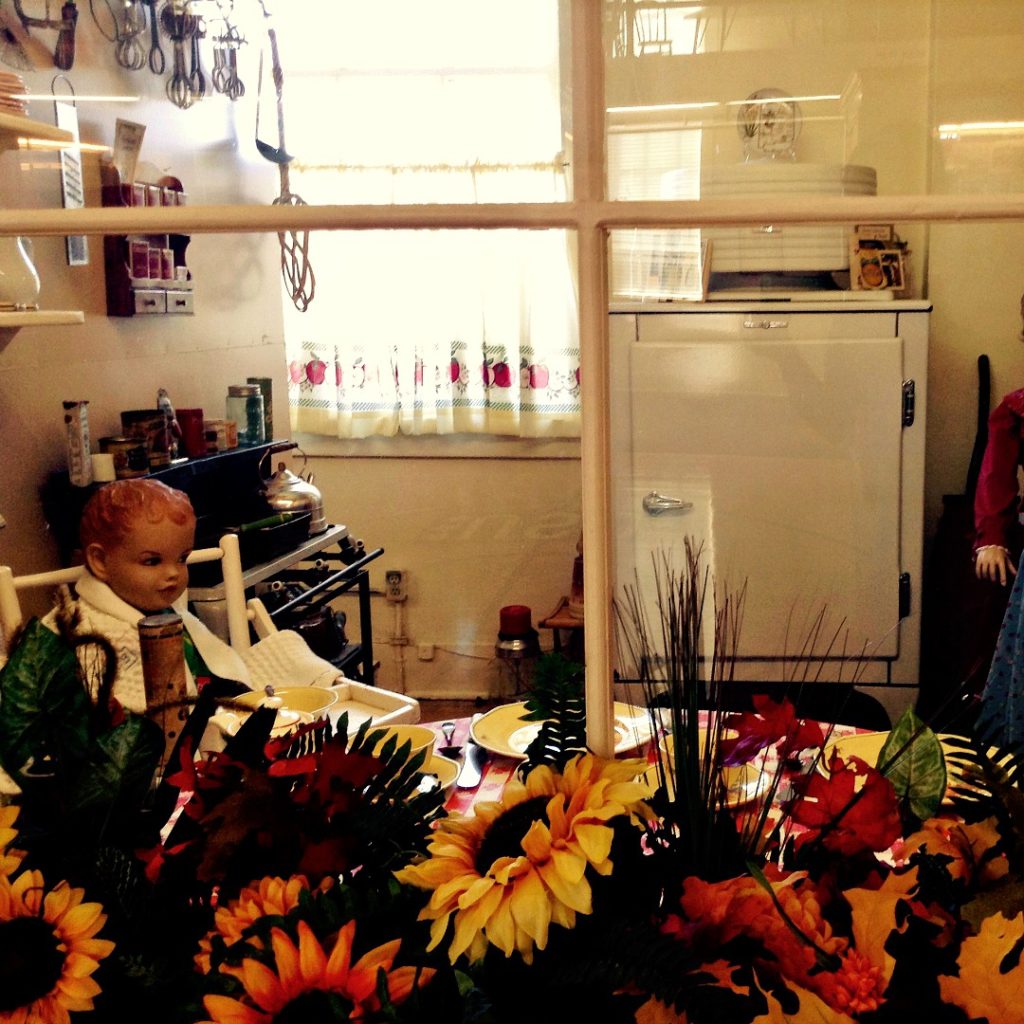 After one look at the prep area and cooktop in this room, you’ll never complain about your tiny kitchen again!

The Deming Luna Mimbres Museum means to celebrate New Mexico’s past by focusing on the people of Deming and those contributions that have influenced their community, New Mexico, even the world.

A tour here aims to introduce you to the ancestors of the current day Deming residents, at least as many of those whose artifacts fit within the confines of the building. (With 25,000 square feet of exhibition space, they’ve managed to fit a LOT.)

These include quilters and collectors of button hooks. Yes, you heard me right ~ buttonhooks. 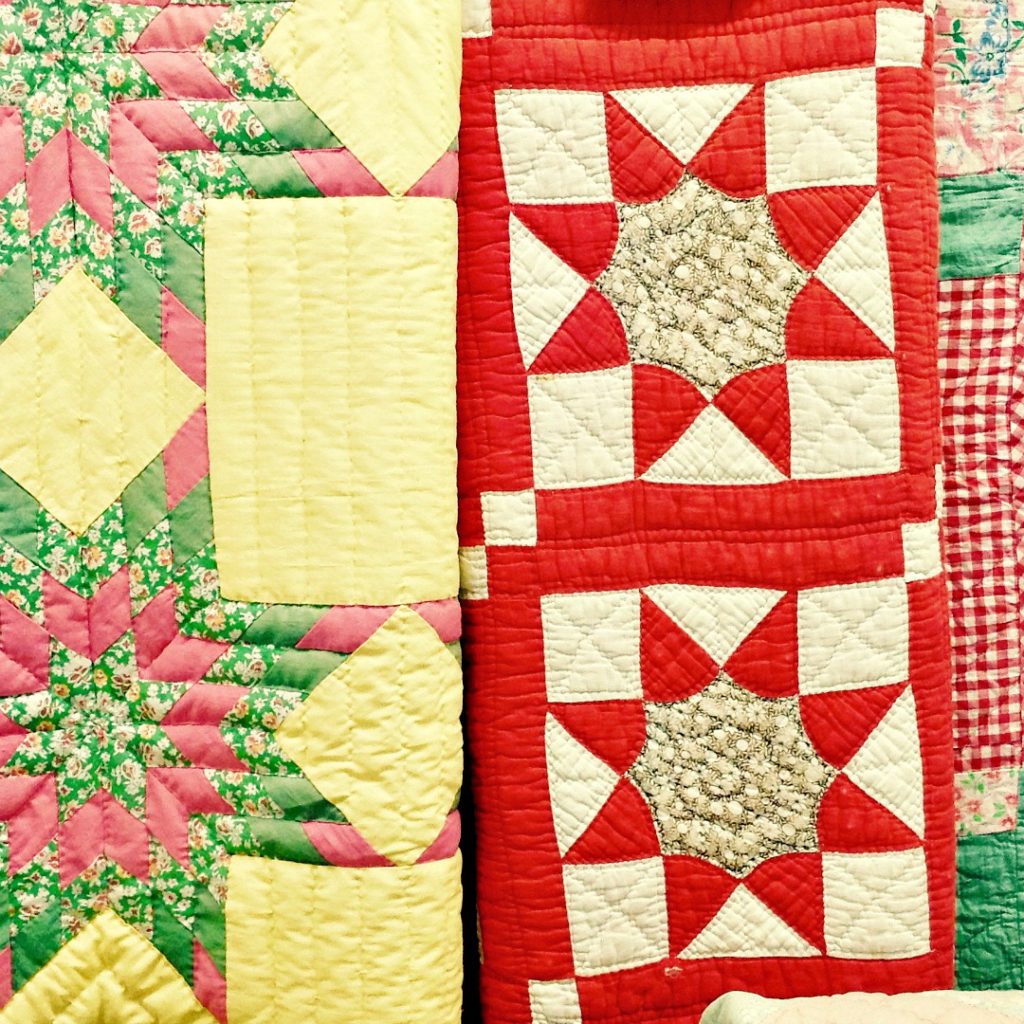 Some of the quilts at the Deming Luna Mimbres Museum date from the mid-1800’s. 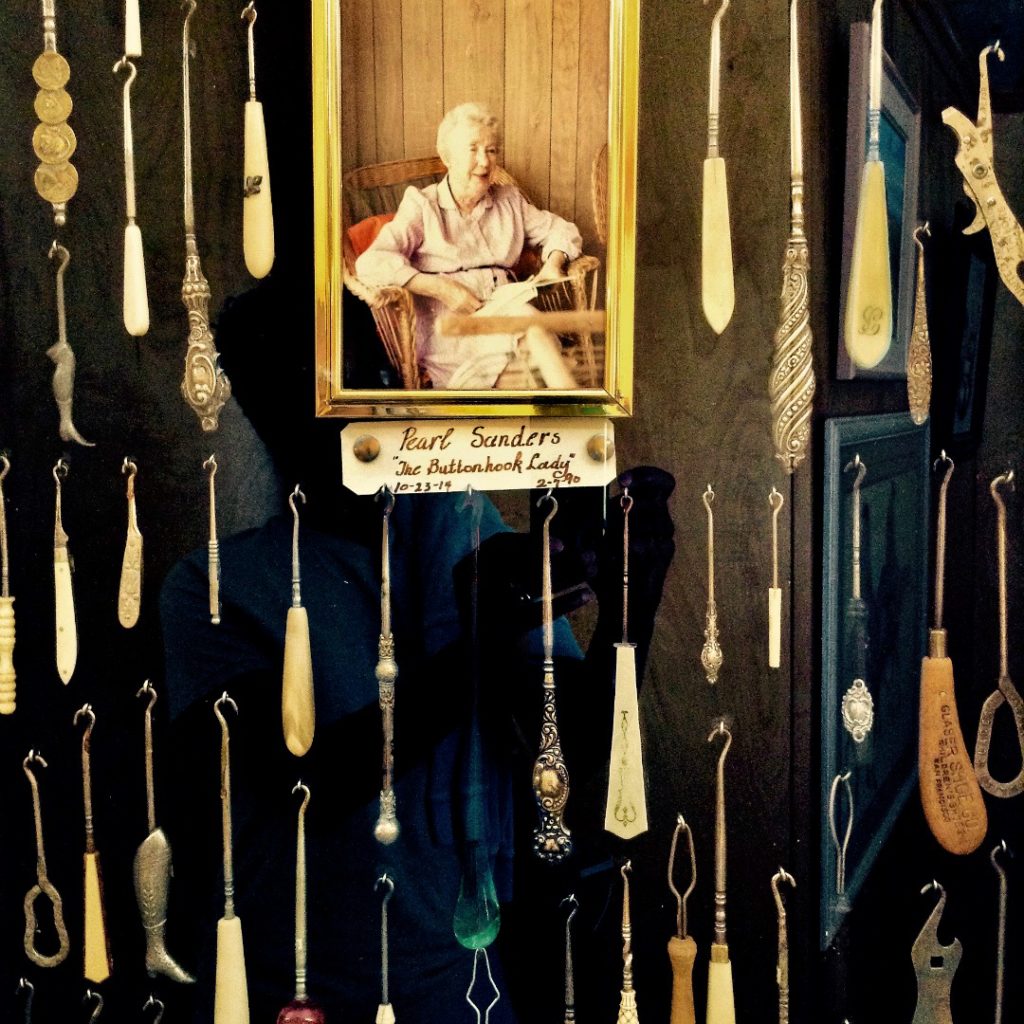 No, I’ve never used a buttonhook either; still, each is unique and beautifully crafted, don’t cha think?

And shopkeepers, like the owner of this grocery store. 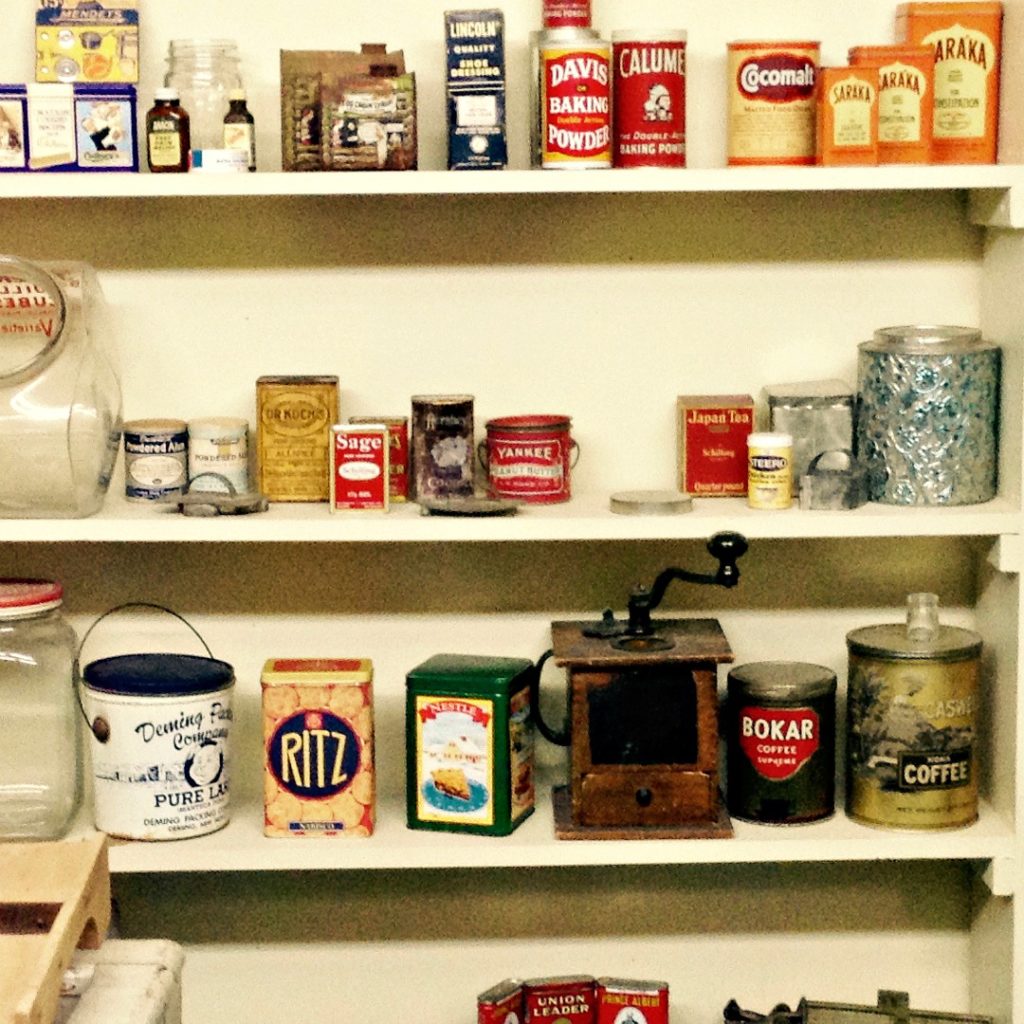 New Mexicans, in cities large and small, have enjoyed international brands like Nestlé and dark roast coffees (like Bokar) for decades.

It is their stories the museum tells ~ too many stories to count. Believe you’ll need a second and third visit to learn them all.

I know I will.

But let me tell you about the three groups of people I remember most from my first New Mexico history tour, the trio of all-stars I call:

Do you know about the Bataan Death March, the forced march of captured American and Filipino service members through the Philippine jungle and their subsequent imprisonment and torture by the Japanese during World War II?

One of the first exhibitions you come across documents the march and the soldiers who endured it. 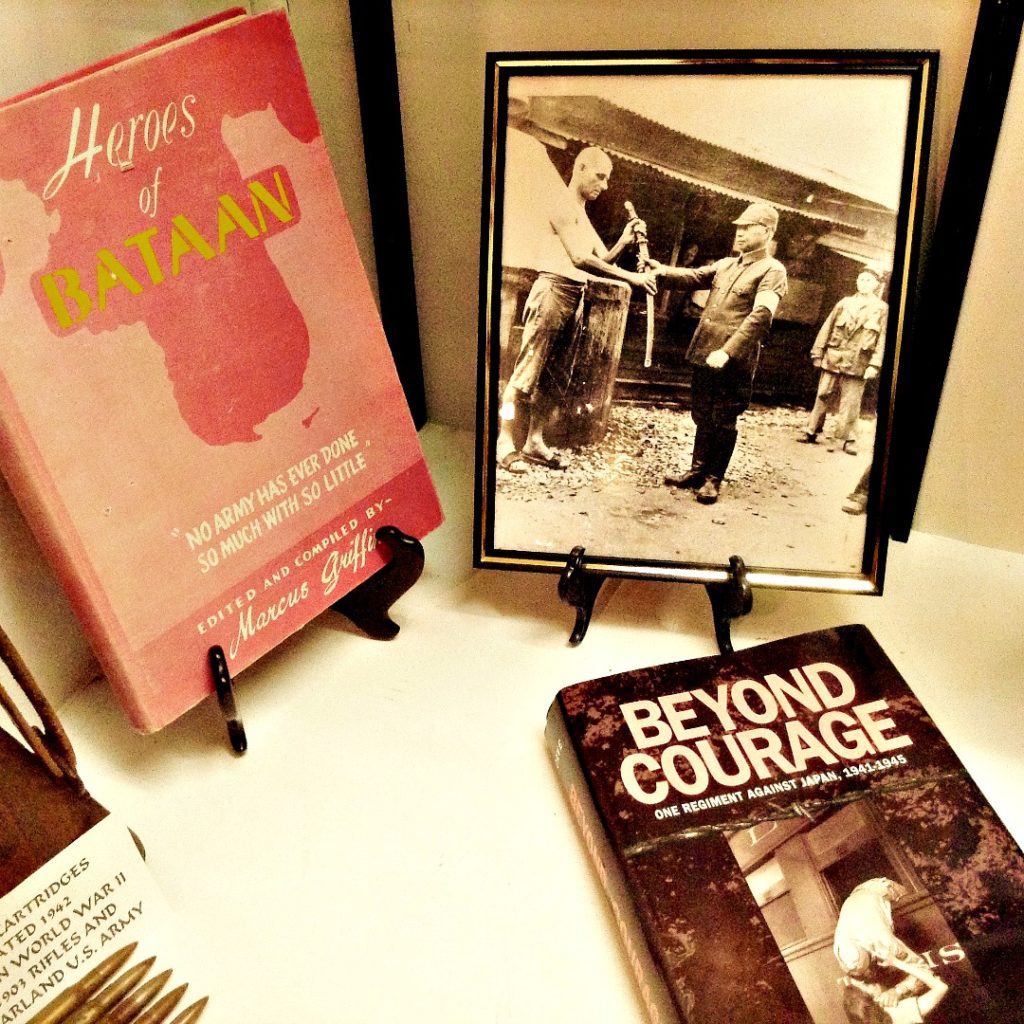 Especially if you’ve ever lived in New Mexico, or participated in the yearly Bataan Memorial Death March at White Sands Missile Range, you’re likely aware that virtually all of the captured American soldiers hailed from New Mexico. And that almost all of these died at the hands of the Japanese.

As I shared earlier on this blog, I did the Bataan Memorial March myself once, even got to shake the hand of two survivors.

Still, it wasn’t until I saw some of the items the Deming survivors had brought back and read the personal accounts they had given to their local newspaper that I felt as if I’d MET any of them. 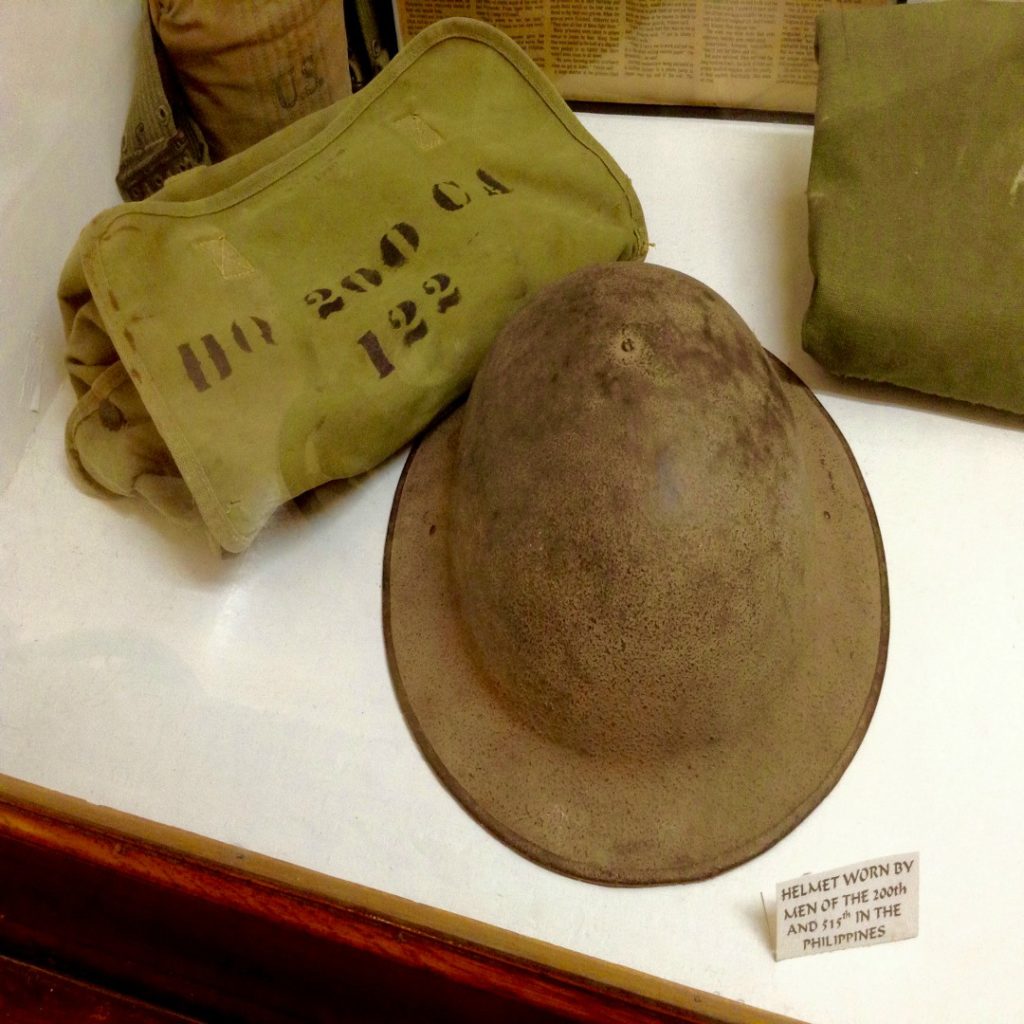 Being able to put a name with a face in this, their New Mexico hometown, changes things.

Among the most creative group of people you’ll meet at the museum are the Mimbres who lived in Southwest New Mexico from 200-1200 AD.

I had heard about these prehistoric people before, seen photos of their pottery but could not appreciate the extent of their artistry until coming face to face with it here.

Deming’s is not the largest collection of Mimbres pottery in the world ~ only the museum at Western New Mexico University in Silver City can make that claim. Yet what’s here is extensive enough in scope and wonderful to see.

In room after room are vessels large and small, most covered with striking designs in a variety of earth colors. The Mimbres depicted animals on some of these creations, even formed some of them with animal shapes. 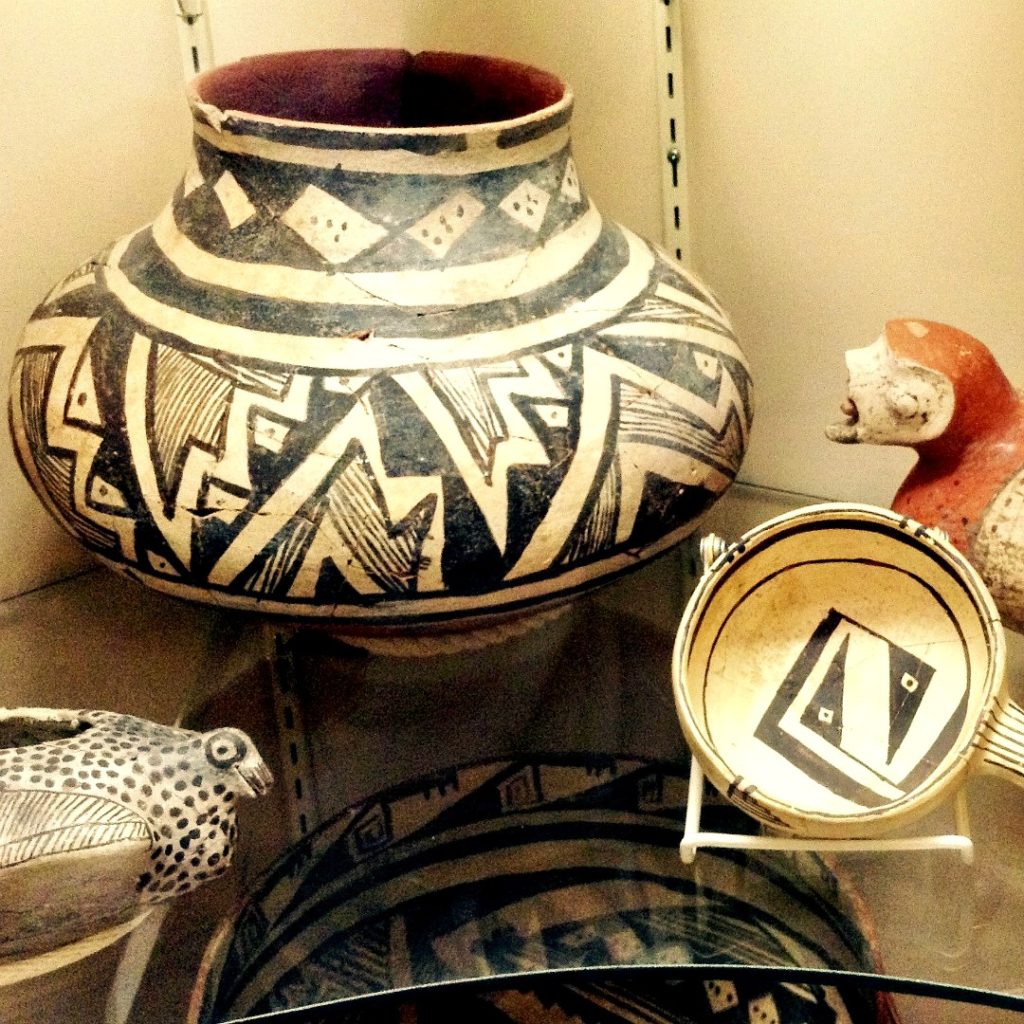 And not only pottery, but jewelry fashioned from These include bracelets, necklaces, and hairpins to tame wayward strands of hair.

A girl can relate. 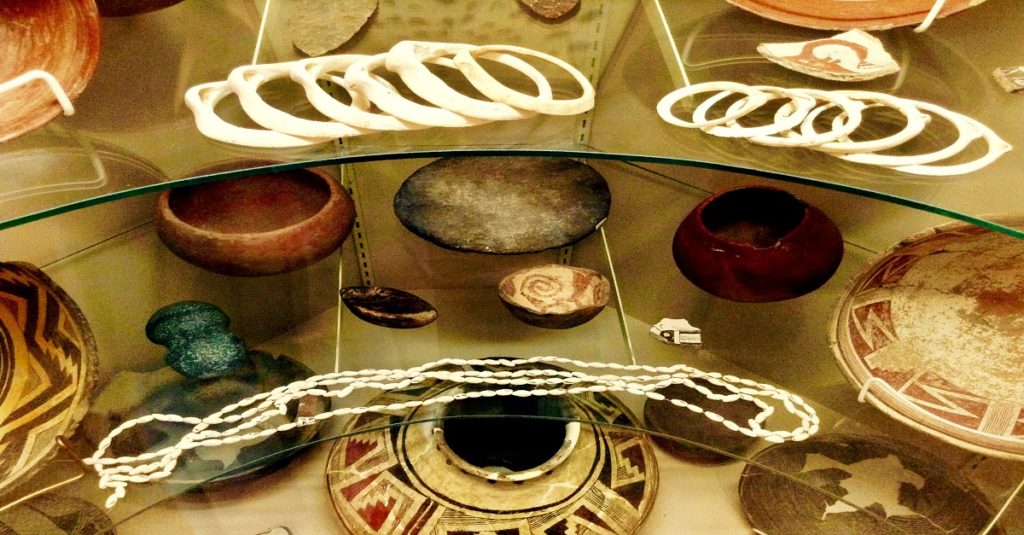 The Mimbres, considered a subgroup of the Mogollon, passed away from this area of Southern New Mexico over 700 years ago. Yet seeing their tools and their handiwork, with imagery showing what they saw and did each day helps them come alive.

Czechoslovakians have been a part of Southern New Mexico community since the early 1900s That’s when Czech farmers who had settled in Texas decided to travel north to New Mexico.

Many of these had roots in Bohemia, a Czech region rich in the arts. So along with contributions to New Mexico’s agriculture, these farmers shared other creative gifts as well. Take a look around and you’ll see they brought Bohemian-Czech glassware, polka dancing, 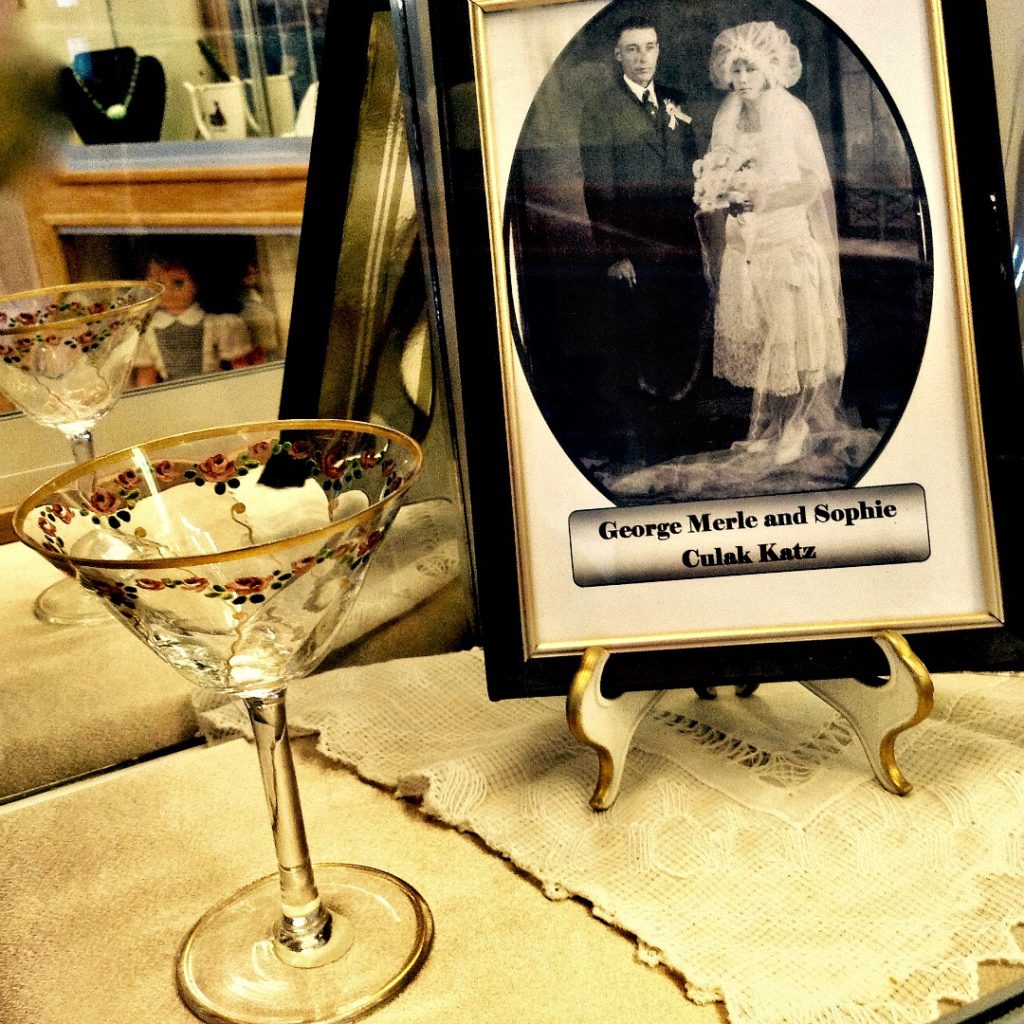 The tradition continues strong today, on the third Sunday every October at the Luna County Courthouse Park in Deming. Even if you’ve yet to experience it, the newspaper clippings on display about the event will have you daydreaming about the wonders of klobase: a sausage made with a mix of coarsely ground pork and beef seasoned with salt, pepper, and garlic. 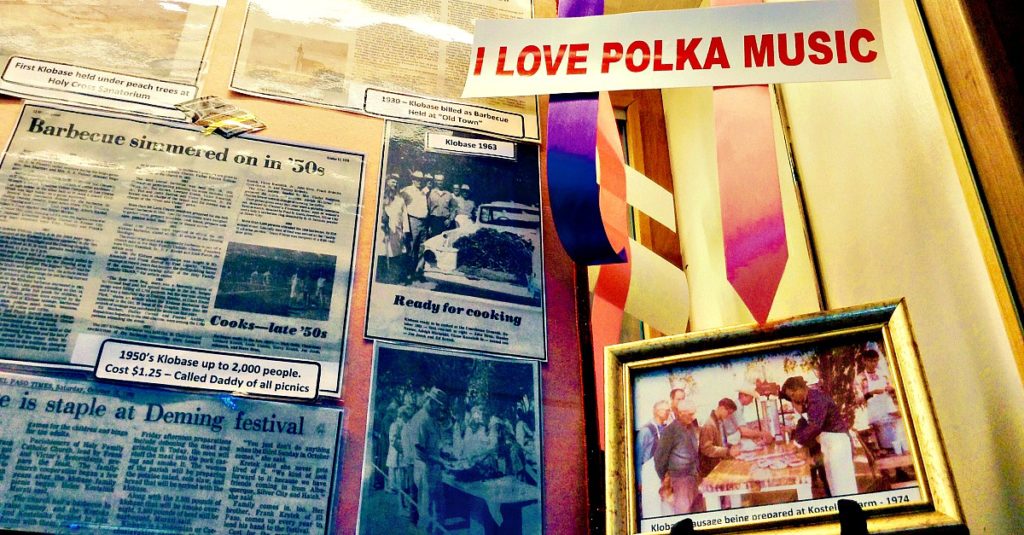 That’s the Deming Luna Mimbres Museum ~ the history of New Mexico sprawled over nearly an acre of real estate in the city of Deming. And on every block, or rather, every display, there is someone new and worthwhile to meet.

Visit and get what may be your biggest surprise of all: you’ll learn history can be interesting after all, it’s only the reading of history books that never was much fun. 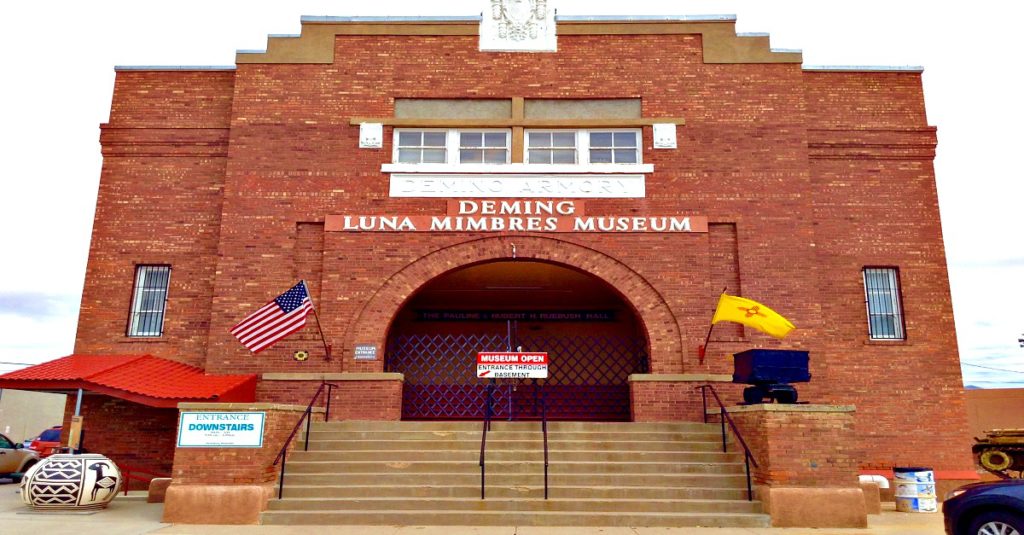 Do museums and books help make the past come alive for you or would you rather see the movie version?