French Onion Soup: a Tale of Two Restaurants That Do It Right 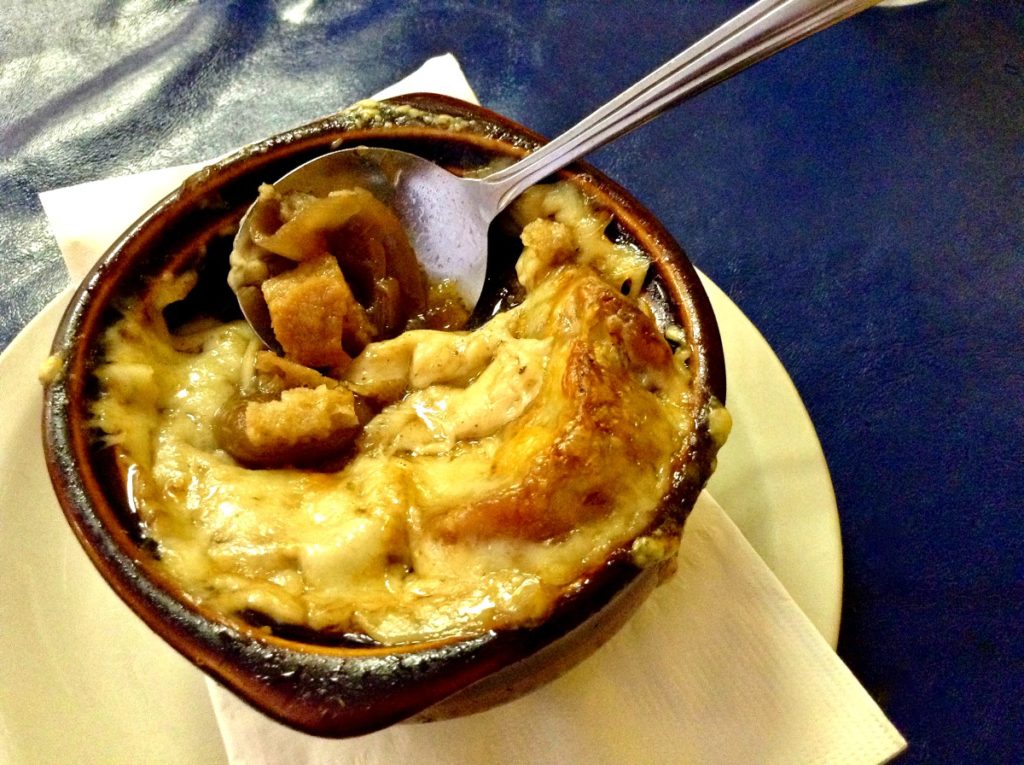 The sign behind the pastry counter at le Rendezvous Cafe and French Pastry shop in Las Cruces seemed to say it all. 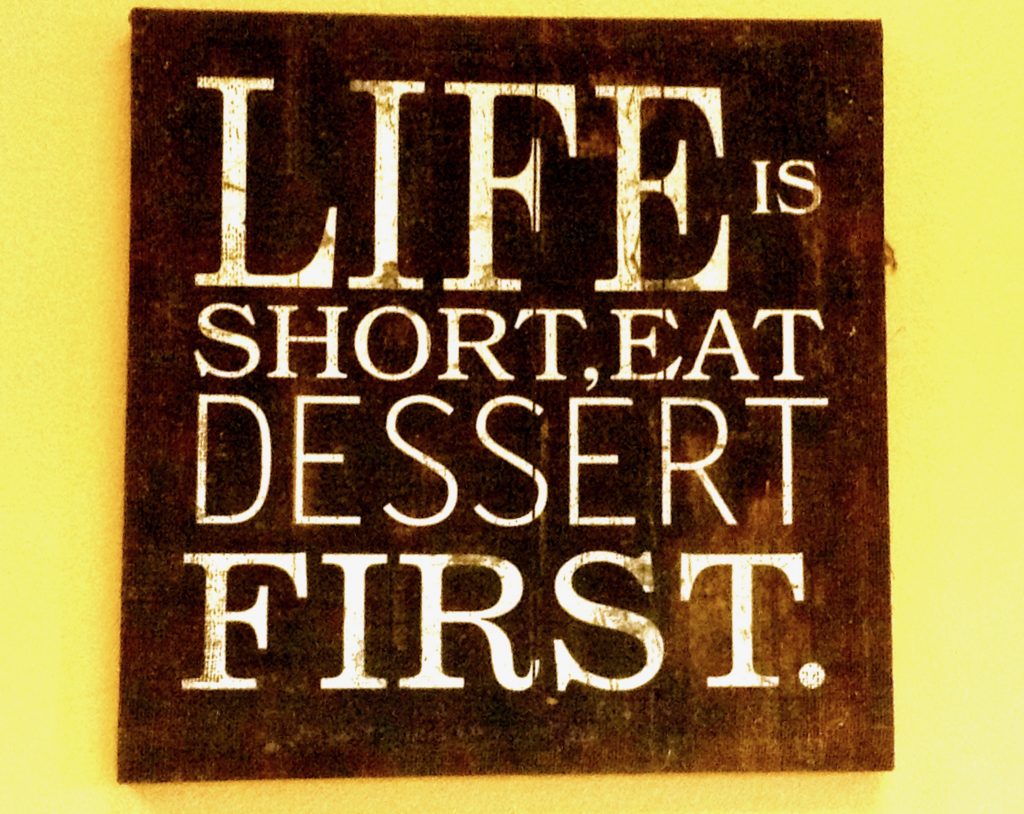 If you had a yen for something sweet and French, seeing it would lead you to believe this locally-owned favorite is THE place in Las Cruces to satisfy it. And you would be right.

You take one look at this sign and begin to fixate on the pecan tarts, macarons, and buttery croissants in front of you. So you buy some pastries and take them home. Or order a cuppa to go with and eat in.

Leastways, that’s how it was for me ~ for years.

Until recently when I realized le Rendez-vous IS as much a Cafe as it is a French Pastry shop.

It’s a place where you can get your fill of savory dishes as well as sweets.

And when I did get my mind right, I decided the cafe’s French Onion Soup would be a good place to start.

That bowl of soup is what led to this Tale of Two Restaurants.

Turns out I enjoyed my own first encounter with le Rendezvous’ French Onion Soup so much I left the eatery determined to find and EAT another good bowl elsewhere.

And that’s just what I did, in a place you’d least expect it.

In fact, by the end of that same day, I had proof positive that whether your taste preference is bold or basic, Southern New Mexico has a French Onion Soup for you.

But I’m getting ahead of myself.

Our oniony tale of two restaurants begins this way . . .

Once upon a time in southwest New Mexico, a gal and her man walked into

For the first time in years of buying freshly baked goodies from this place, they passed by the bakery display and — wait for it . . . sat down to order A MEAL.

(They were on the way for a day in Silver City and needed a good breakfast for the 2-hour plus drive.)

So the man ~ okay, my man ~ ordered toast, eggs and bacon, a plate they call le Americain.

But I, wanting something to warm me up that brisk morning, ordered the French Onion Soup. Then I relaxed and took in the room.

Photos and prints depicting Paris and French life dotted the walls all around.

Servers and those working in the kitchen prep areas, behind the counters moved with purpose.

Even the head chef and owner, Thierry Marceaux, was out and about visiting tables, enjoying time spent talking with his guests.

Groups of people, mostly couples but threesomes as well, sat talking and eating at most every table. And their expressions, as they talked, were animated.

Their conversation created that buzzing background noise that all good cafes have.

You know the “buzz” I’m talking about. It’s a sound that energizes you and makes you happy to be in the company of others. Yet, at the same time, it allows you to get and stay lost in what’s happening at your table.

Bottom line, if you like a casual French atmosphere that invites you to relax and engage in quiet conversation, you’ll enjoy this restaurant. (And if you have ever traveled in France or intend to, you’ll luv it.)

And if you like your seasonings applied with a light touch ~ you’ll enjoy your French Onion Soup experience at le Rendezvous Cafe.

For starters, the bowl arrives at the table looking . . . well, beautiful. 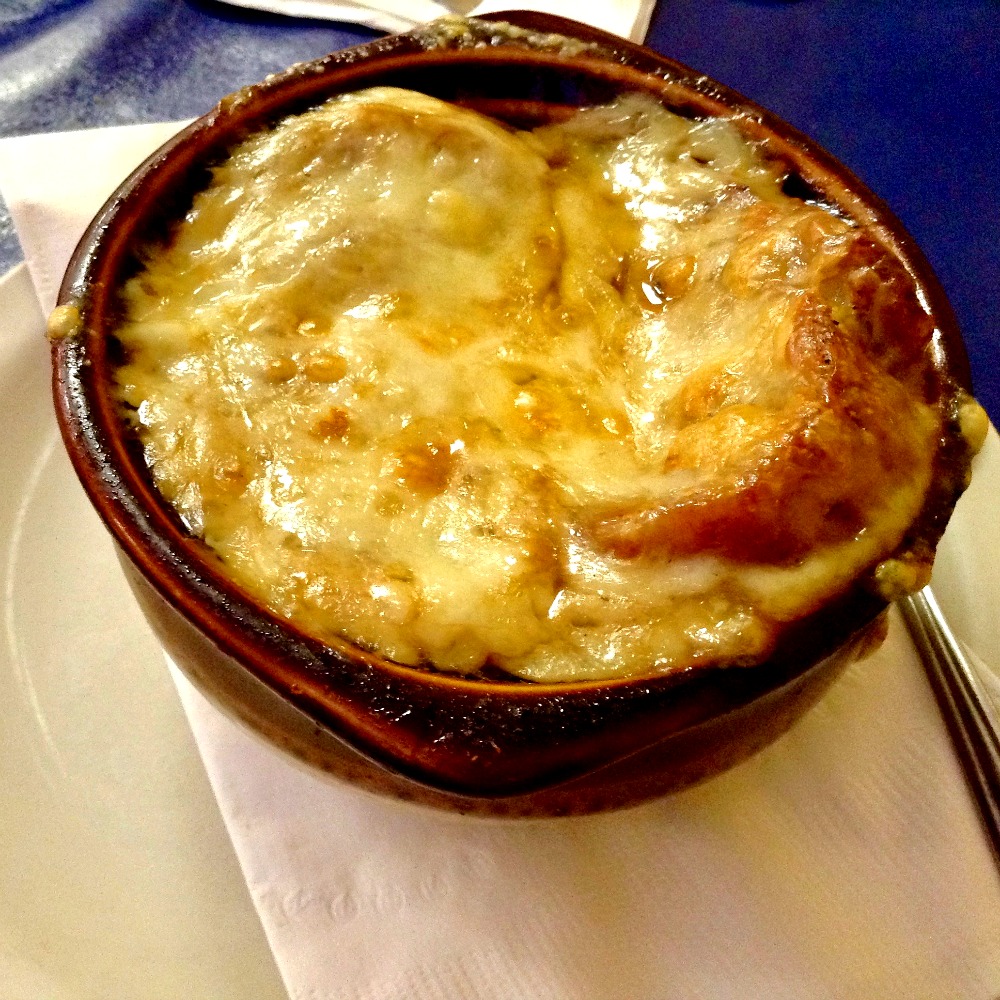 The cap of melted Swiss cheese, once you’ve made a dent in it, comes apart easily enough for you to take bits of it with each mouthful of soup.

The hidden treasure underneath the cheese? Lots and LOTS of thin slices of caramelized onion with croutons made deliciously soggy from the broth.

This French Onion Soup is balanced and elegant.  No single ingredient pops out on your taste buds saying, “Look at me!”

It’s a classic and the way le Rendezvous does it is classy.

I left the restaurants satisfied, as in no longer hungry. But all throughout the drive to Silver City and our walk about the town, 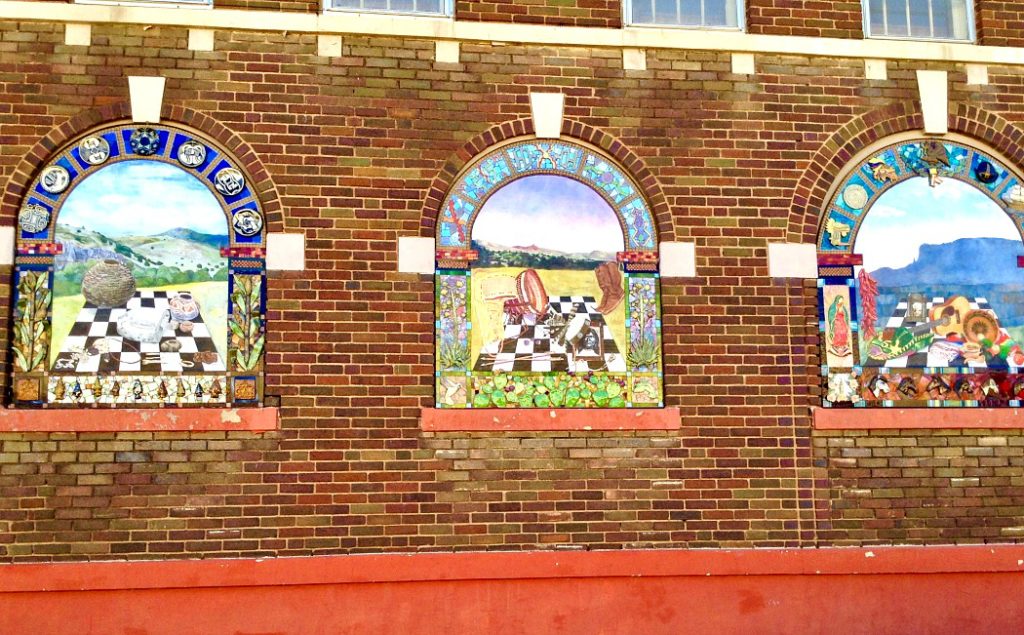 I thought about where I might go to have MORE FRENCH ONION SOUP.

WAY out in Deming.

Getting there means a 10-minute drive into what seems like nowhere after you exit the I-10. Where you see NOthing and NObody.

Least that’s how it is when you arrive after sunset as we did.

But then finally, like a determined prospector mining for gold against all odds, EUREKA, we found it!

We saw no sign with the restaurant’s name but there was a large area ahead filled with parked cars. And lights flickering in the large building nearby. The voices of people talking and utensils on plates got louder as we neared what looked like an entrance, just beyond an old windmill and . . . is that a bronze bull behind us?

Once inside, I found the Adobe Deli’s idea of what a restaurant “should” look like is different, 180 degrees out from the norm.

The dining room seemed so dark, almost as dark as it had been outside. It reminded me of the saloon dining area you’d see in a western movie, like Tombstone.

What light there was came from the bar area and the candles atop the tables.

Just as well, with all the scraping of utensils of plates I could hear and the raised fists with a pork rib in it I could see. Let the people have their privacy to strip their ribs down to the bone in peace. (And, as I’d soon find out, the low lights can help with emptying bowls of French Onion Soup as well.)

The decor was the only thing dark about Adobe Deli. The staff, including the bartender and the other folks at the bar, where we sat as we waited for a table to become available, showed themselves friendly. (This was a Saturday night and we hadn’t made a reservation, remember?)

But we didn’t have to wait long. Soon we were seated surrounded by other diners we would trade quips with before the evening was through.

That’s when I could focus on the . . . decorative objects. Deer, bear and other wild animals were stuffed and mounted around the room. As we sat waiting for our meals to be served, a crocodile bared his fangs at my left. An oryx and several members of the deer family danced on a platform at my right. 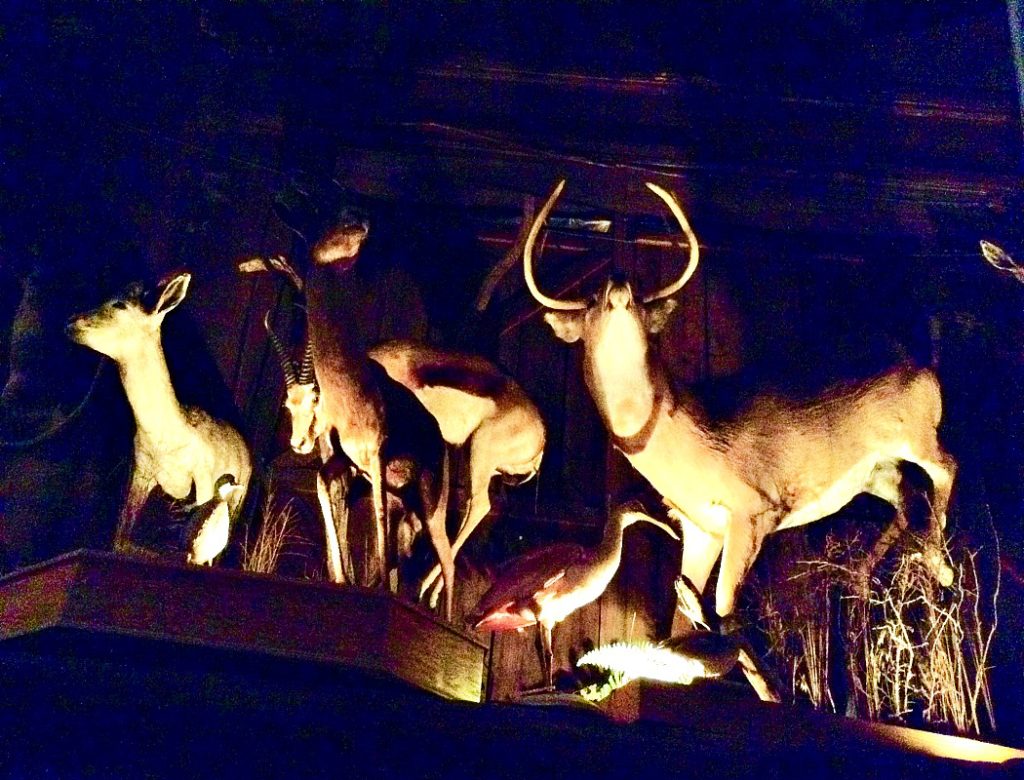 Adobe Deli is not your typical deli either. You can feast on steaks and ribs as well as sandwiches and soup.

This deli turns the classic French Onion Soup recipe on its head just as it does the decor. 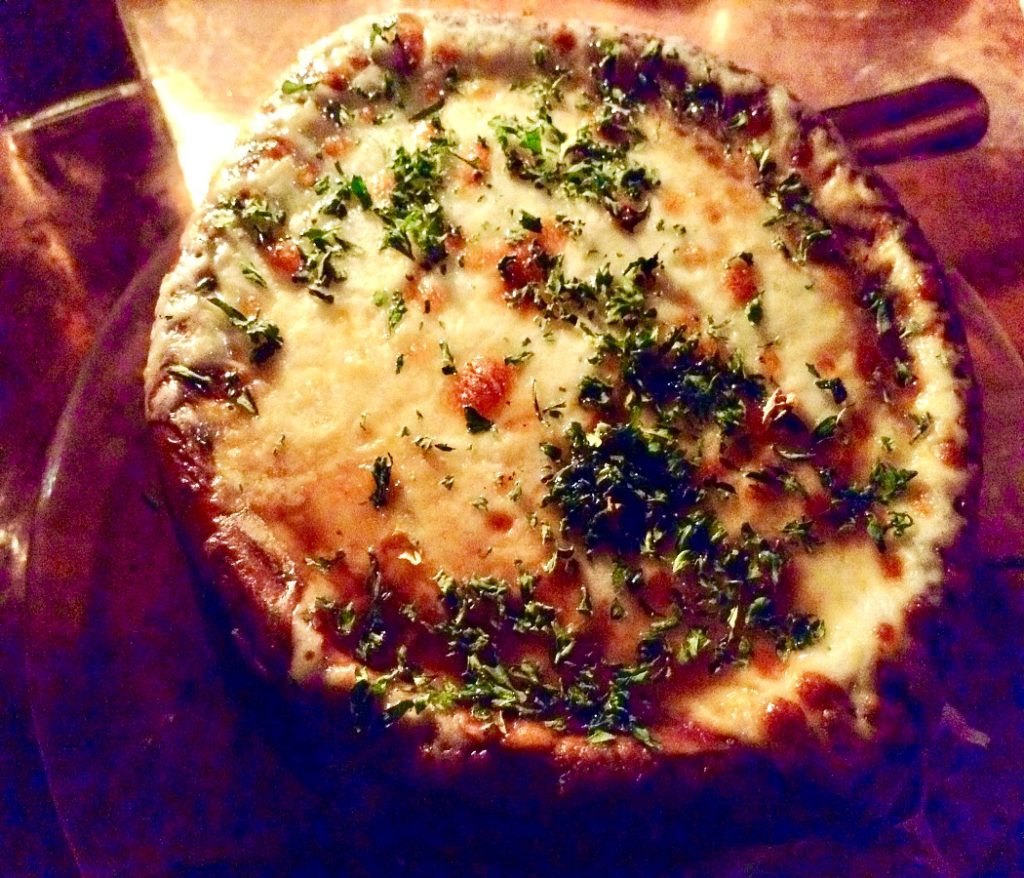 First of all, the cheesy shell cap is neither French nor Swiss, but Italian mozzarella.

Have you ever seen “The Blob,” the movie about this creature from outer space that looks like a giant, ever-growing and pulsating . . . blob?

Once it got a hold of you, that was IT ~ no way that stuff was gonna come off.

Well, the cheese on this French Onion Soup is like that ~ a glorious goo you want so much to come off, away from the other cheese, and away from the spoon only so you can get in into your mouth.

And the onion in this soup comes in plump rolls instead of delicate slices.

This is a BOLD French Onion Soup in every way. Spicy, too 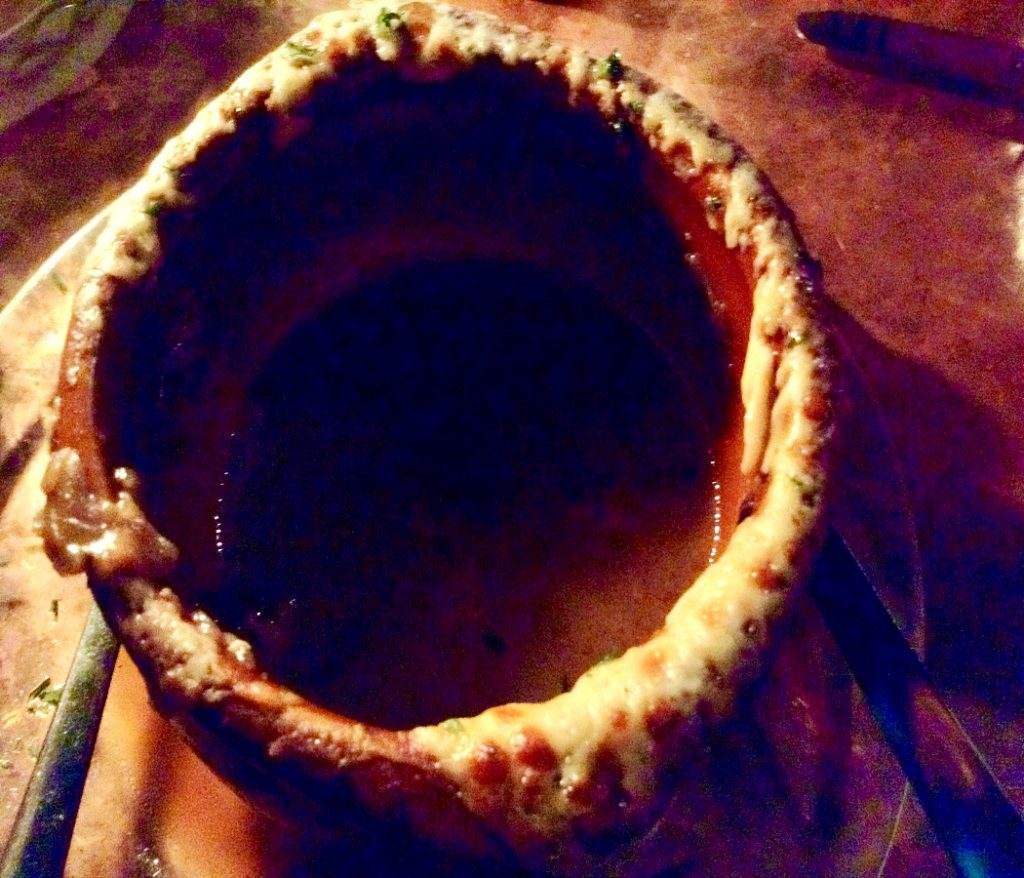 There’s a reason we have two hands. This oh-so-cheesy French Onion Soup is one of them.

Mind you, eating an Adobe Deli French Onion Soup for all it’s worth takes a bit of technique.

You see, a few times when I tried to break a spoonful of cheese away from the blob so as to have it go down the same time as the onion I . . . well, I had to use my other hand to help get it free.

Even my husband raised an eyebrow at this. And I remember being grateful for the room being dark and making it unlikely for anyone else to notice I was playing with my food.

Maybe you’ll do better than me and figure out a way to eat your fill and look elegant at the same time. Let me know if you do.

In the meantime, better to be thought a bit “rough around the edges” than go hungry with a perfectly good bowl of soup in front of you.

Now, this reminds me of a story about how modern French Onion Soup came to be.

And about why even though people everywhere have been cooking veggies in broth since the time of Ancient Greece, French Onion Soup reigns as one of the most famous vegetable soups in the world today.

THE STORY ~ How modern French Onion Soup came to be

It involves the 18th-century French king, Louis XV, and goes like this:

The king’s father-in-law and one-time King of Poland, Stanislas Leszczynski started off one day to visit his daughter at Versailles Palace.

On the way, he stopped overnight to dine with a friend, Nicholas Appert, the chef who would invent the process of canning.

The onion soup Appert served for dinner so rocked Stanislas’ world, he came down to the kitchen in the middle of the night, still dressed for bed, to cook alongside the chef.

Even though the aroma of so many onions kept him in tears, Stanislaw was determined to learn how to prepare the soup himself.

When he finally arrived at Versailles, Stanislaw introduced this Onion Soup to the French court. And the rest is food history.

~  it’s not a stretch to imagine that the same Stanislaw Lesczynski who played a major role in introducing the world to the Rum Baba would stay up all night learning to make soup.

All while crying in his jammies.

So I’m sure King Stanislaw would agree that both Adobe Deli and le Rendezvous Cafe make tasty versions of this classic dish.

He’d say that good simple ingredients prepared with attention make for good food, whether they come seasoned with dashes of subtlety or heaping teaspoons of the unexpected.

And then he would pull up a chair and dig in ~ with both hands, if necessary.

Is French Onion your favorite soup? If not, what is?