Engineering Made Easy at Hoover Dam 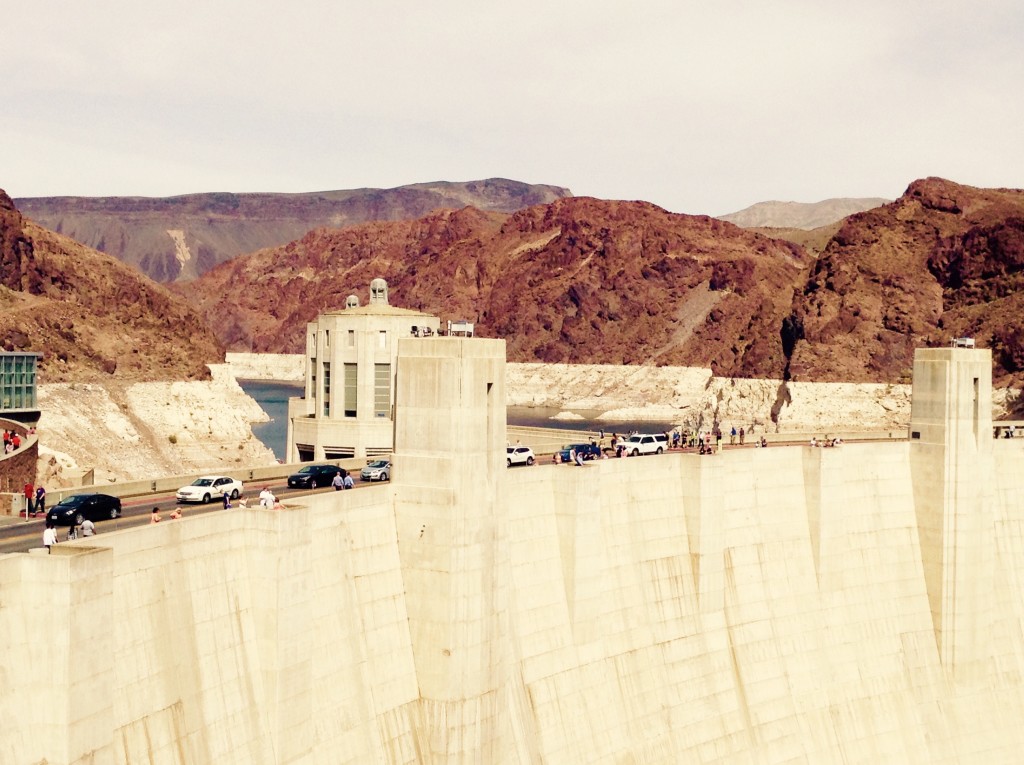 This “tallest concrete dam in the Western Hemisphere” was top of the list for things to see on our recent road trip.

Does my admiration with BIG engineering projects and concrete come from growing up in New York City? Or does it come from seeing ancient Roman structures still standing strong in cities throughout Europe?

What I do know is that Hoover Dam is one of those places that make you wonder aloud, “How DID they do that?” And the Hoover Dam Tour answers that question in terms and visuals even non-techies can understand.

Exactly how is a Hoover Dam Tour “engineering made easy?”

With the combination of guided tours, interactive displays at the Visitor’s Center, and a trip to the observation deck. In short, you hear, read, and see how this dam, and dams in general, work.

And from that observation deck, you can see a lot.

Construction on the Hoover Dam ~ named for the president in office at the time, Herbert Hoover ~ began in 1931. Its completion in 1935 allowed the creation of Lake Mead ~ that spot of blue water in the featured image above ~ a 247-square mile wide recreational center.

The waters of Lake Mead running through turbines in Hoover Dam’s power plant generate electricity for millions in Arizona, Nevada, and California.

And where did the water in Lake Mead come from?

From the Colorado River. That’s the blue stuff you see when you look down from Hoover’s Dam’s observation deck: 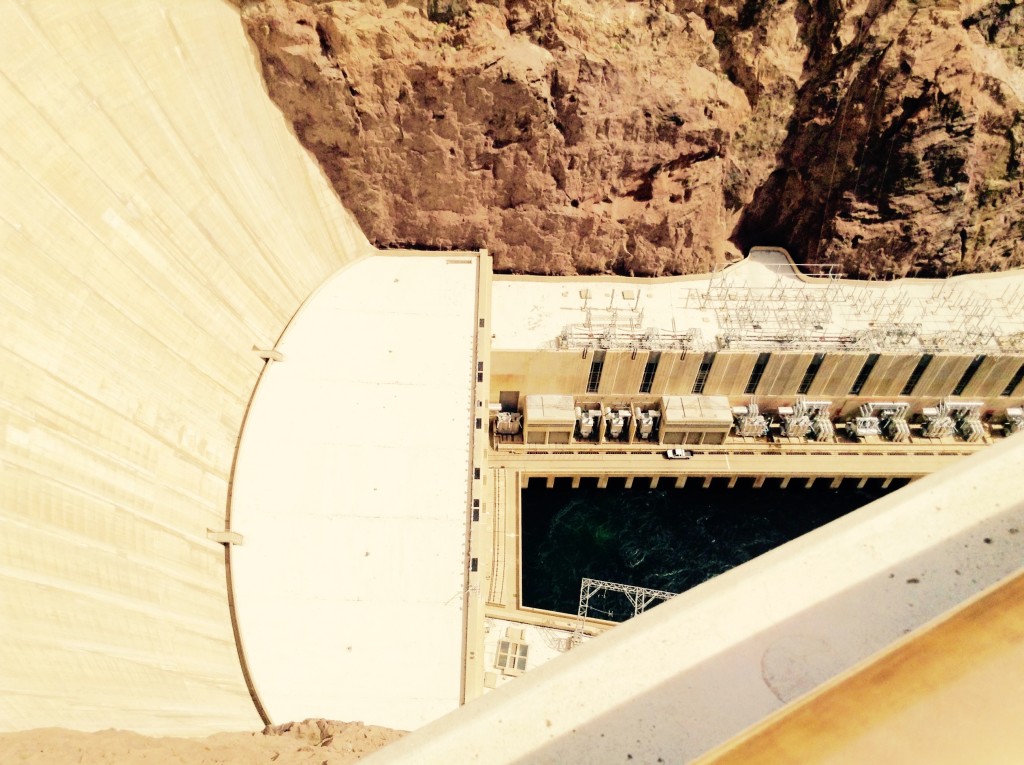 The Hoover Dam straddles Black Canyon on Nevada/Arizona border, with Lake Mead on one side and the Colorado River on the other.

All that you’ve heard on your tour about the Hoover Dam being an “arch-gravity dam” makes sense when you look at where the base of the dam meets the Colorado River.

While Lake Mead pushes the dam against the canyon walls, the dam’s own weight ~ nearly 7 million TONS! ~ glues it to the floor of the canyon.

And what a drop!

The Hoover Dam is 726 feet high, with enough concrete to build a 4-foot wide sidewalk around the equator.

That’s a long way to fall.

A few dam workers did die on the job from falling, others in rock slides or by being electrocuted ~ a total of 96 construction-related deaths in all.

While understanding how Hoover Dam works is engineering made easy for us, the work itself was anything but easy for the men who built it.

Jobs on Hoover Dam came with lots of risks but it was steady work in the Great Depression and over 20,000 men were happy to get them. 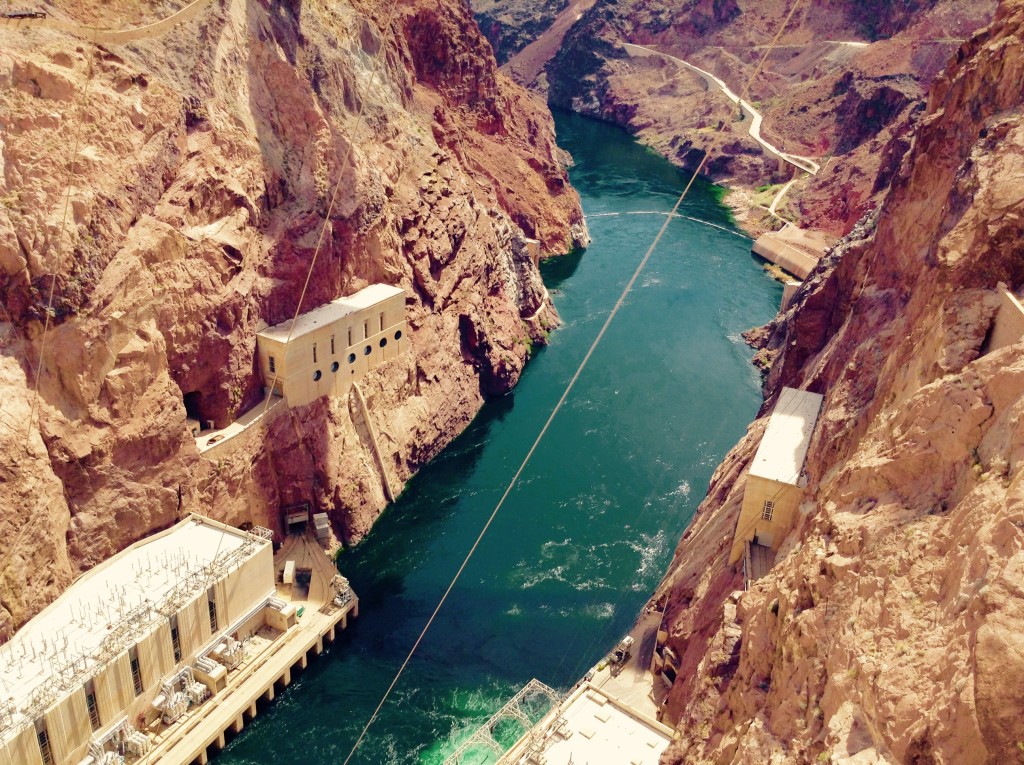 The Hoover Dam controls flooding in the lower portion of the once wild and murky Colorado River. Rivers from several southwestern states, including New Mexico, are tributaries to the Colorado River.

One look at the constantly surging Colorado River itself from the observation deck helps you imagine the dangers its constant flooding caused before they built the Hoover Dam.

The Dam harnesses the power of the Colorado River to irrigate farmland in the U.S. and even Mexico. It also provides water to people in California, Arizona, and Nevada.

The Hoover Dam Bridge spans 890 feet above the Colorado River, connecting Arizona and Nevada. Actually, they named the bridge in honor of two war veterans ~ a former Nevada governor and an Arizona football player. So it’s official name is the Mike O’Callaghan-Pat Tillman Memorial Bridge. 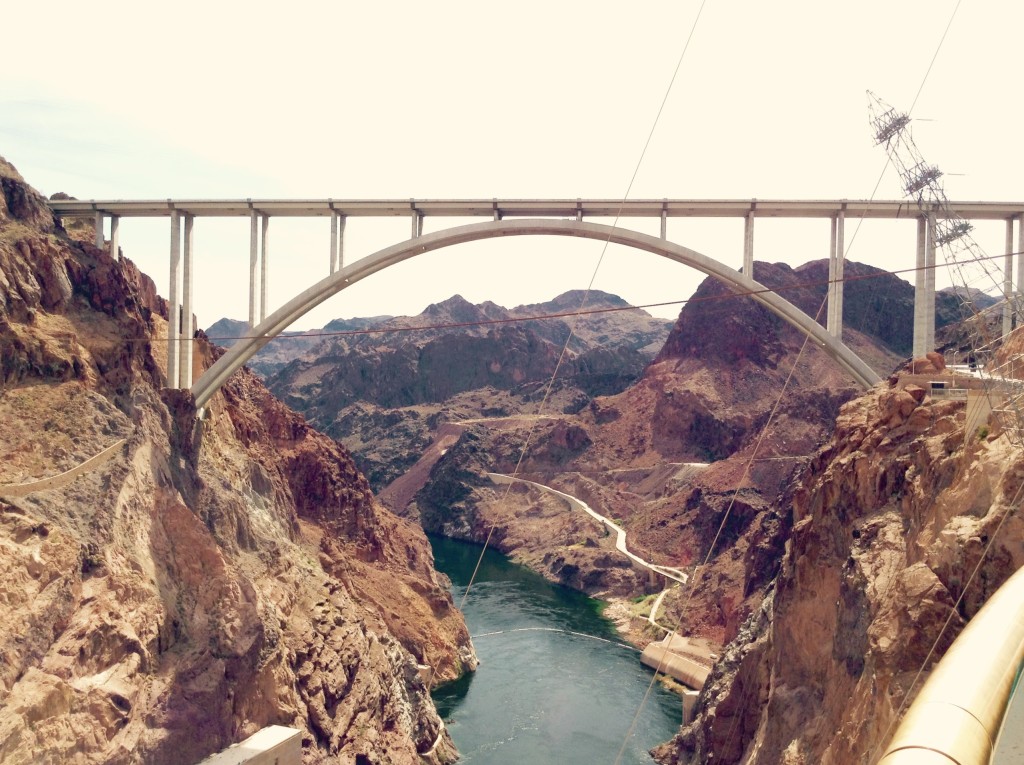 There you have it. Construction and hydro-electric engineering so simple a travel and food writer from Las Cruces can understand it.

Whether the Brooklyn Bridge or the Egyptian pyramids or . . .  which of the world’s engineering marvels has impressed you most?