The women spread supper—a large bowl of cheese melted in butter, into which we dipped our maize bread, and very good it was. ~ Edith Durham, High Albania

Have you ever tasted Pispili, the Albanian cornbread seasoned with leek and crumbly feta cheese?

This is a perfect dish for parties and other group gatherings. It’s only 45 minutes from prep until it comes out of the oven, steaming hot, ready to be sliced, and pounced upon.

Of course, you could bake a small pan all for yourself, too. Then have a generous slice with, say, hot soup one day and a dish of stew the next until it’s all gone.

One thing for sure: if you’ve never been to Albania or tasted Albanian food, a chunk of Pispili will be a tasty (and filling!) introduction.

You’ll find, in this one dish, some of the very best foods that each region of this ancient European country has to offer. These include:

And, finally, leeks that grow in various varieties all over Albania.

THIS RECIPE COMES FROM THE KITCHEN OF DONIKA, THE WRITER & CHEF IN CHARGE AT HER BLOG, WHEN FETA MET OLIVE.

Donika is Canadian-born, but her ancestry is Albanian and her ties to those Albanian roots are strong. Many of her recipes are old family favorites; this recipe for Albanian cornbread with feta & leek is one of these.

WHAT MAKES THIS RECIPE SPECIAL?

The magic in this cornbread lies in the balance between the tangy Feta cheese and the delicately mild leeks. It’s a yin-yang thing, Albanian-style.

So even if you’ve thought of Feta cheese as a “strong tasting” cheese, as I did (and do), you may still end up liking this dish. And once you catch yourself and some of your peeps reaching for seconds, well, you may have to rethink your ideas about Feta entirely.

A small group gathering is an ideal occasion to introduce your crew to Qabili Palao, the national dish of Afghanistan.

For one thing, Qabili Palao packs big flavor and portions hearty enough to satisfy a small crowd. And for another, it’s likely a dish that no one in your crowd has tasted before.

What’s more, this recipe boasts a unique spice blend that includes slightly sweet cardamom, mildly bitter cumin, salt, pepper, and even a bit of sugar. The spices work together with the carrots, nuts, and raisins to enhance the flavor of the rice and perfume the entire meal as well.

The result is a dish that’s deliciously spicy but in no ways spicy hot.

So all of your friends and family members — even those who “can’t eat hot food” — can enJoy Qabili Palau. It delivers maximum flavor without any burn.

This sweet and savory rice dish will leave each member of your small group feeling well-fed and well-loved.

So what’s the name of this dish again?

Qabili Palau. Afghans originally called it Kabuli Palau, after Kabul, their capital city. But as the dish became more and more popular, the name changed to Qabili Palau.

“Qabili” means well-able and once everyone started making this dish, the bar of excellence got higher. The home cook who could make a stand-out version came to be considered quite skillful in the kitchen — and superior marriage material. (More about this later.)

This Qabili Palau recipe comes from the kitchen of Humaira Ghilzai, writer at Afghan Culture Unveiled.

Humaira was born in Afghanistan and spent her childhood there. However, for decades now, she has been living in the U.S. So she’s more than familiar with what the real deal Afghan dish should taste like. And she also knows exactly what foods available in American grocery stores work best in bringing out the authentic flavor of Afghan cooking. 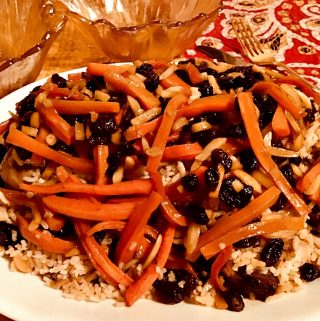 * Any italicized words you see in the recipe instructions are those I’ve added to clarify that specific step. I don’t want anything to get in the way of your enJoying Ms. Ghilzai’s delicious recipe to the full!
Keyword small group, special occasions

Sprinkling the top of the dish with rosewater — I use this one— just before serving adds a delicate fragrance that whets the appetite and makes the whole thing smell truly beautiful!

What makes this recipe pop, besides the spices and carrot-raisin blend, is the “sauce.” That is, the savory juices created as the meat, oil, and onions simmer together. It’s this sauce that you mix with your perfectly “al dente” rice 😉 before topping it with the other fixings and putting it in the oven.

So just imagine, your already fragrant, tasty basmati rice becoming even more flavorful as it bakes.

Food is more than what we put into our bodies… It’s the feel of a place, something language can’t get at, the memory of a place as it forms. Wherever I am, food is what takes me there. —Jessica Fechtor, Stir

You say Kabuli, I say Qabili. Whatever we end up calling it, we’ll likely agree that Afghanistan’s national dish, Qabili (Kabuli) Palau, is delicious.

The secret to Qabili Palau’s allure is Afghanistan’s unique geography and history. The country lies along what was once THE crucial trade route between Persia and India.

As a result, for thousands of years, caravans from these two great empires traveled through this mountain country. And Afghan cuisine, in a very literal sense, soaked up Persian and Indian culture.

In Qabili Palau, you can taste the difference they made.

A SHORT HISTORY OF QABILI PALAU

The slow-cooked rice dish was born in Afghanistan’s capital city, Kabul, in the households of the well-to-do. Only they had the means to buy raisin, nuts, and carrots to flavor their rice. Hence, its original name, Kabuli Palau.

Palau  =  rice cooked in broth, prepared in such a way that the grains fluff, stay separated, and never get mushy, introduced by the Persians. (More about the Iran-Afghanistan connection later.)

Then, as economic prosperity grew throughout Afghanistan, so did the popularity of Kabuli Palau. Soon people all over the country were eating it. And the dish took on a new name: Qabili Palau.

The thinking back then was that only someone with mad-cooking skills could prepare this dish.

Afghans say a woman who can make a great Qabili Palau attracts more marriage proposals than one who doesn’t. So it’s easy to imagine that Afghan men, when courting, ask themselves questions like:

“Does she laugh at my jokes?”

“Can she cook a mean Qabili?”

How do we know this? Well, because it’s much the same way with American men. Just swap the word “Qabili” with “ribeye steak” and you’ll understand what I mean.

Now it happens that Qabili Palau…

is not the only type of Palau prepared in Afghanistan. You’ll find people eating different versions of the dish throughout Central Asia…

…from as far west as Iran to as far east as the Xinjiang Uyghur region of China.

But ALL of those versions combine rice, meat, vegetables, and spices to make a special occasion dish that has been satisfying much of Asia for centuries.

So how have Afghans managed to make “Qabili Palau” their unique own?

First of all, they use specific kinds of rice, meat, vegetables, and spices in the dish.

Afghans are well, “nuts” about nuts, and popular recipes feature almonds, pistachios, and pine nuts, as well as many others. You could say they like raisins, too.

Afghans have many different kinds of dried fruit and nuts to cook with: fruits and nuts together comprise more than a third of the country’s total exports.

Afghanistan, with all of its beauty and yes, confusion, too, is far away. However, in preparing Qabili Palau at home, you can celebrate and taste some of the best this ancient culture has to offer at home. You’ll also feed your family well and that’s ALL good.

~~~~~I'm Melodie, a destination-inspired storyteller and good food adventurer. Traveling, to experience the wonder of other cultures, has been my lifelong passion. Now, I want to share what I've learned so you, too, can nourish your traveler's heart, explore the world, and eat crazy good food on the regular. It's like this...

She’s like a trading ship that sails to faraway places
and brings back exotic surprises.