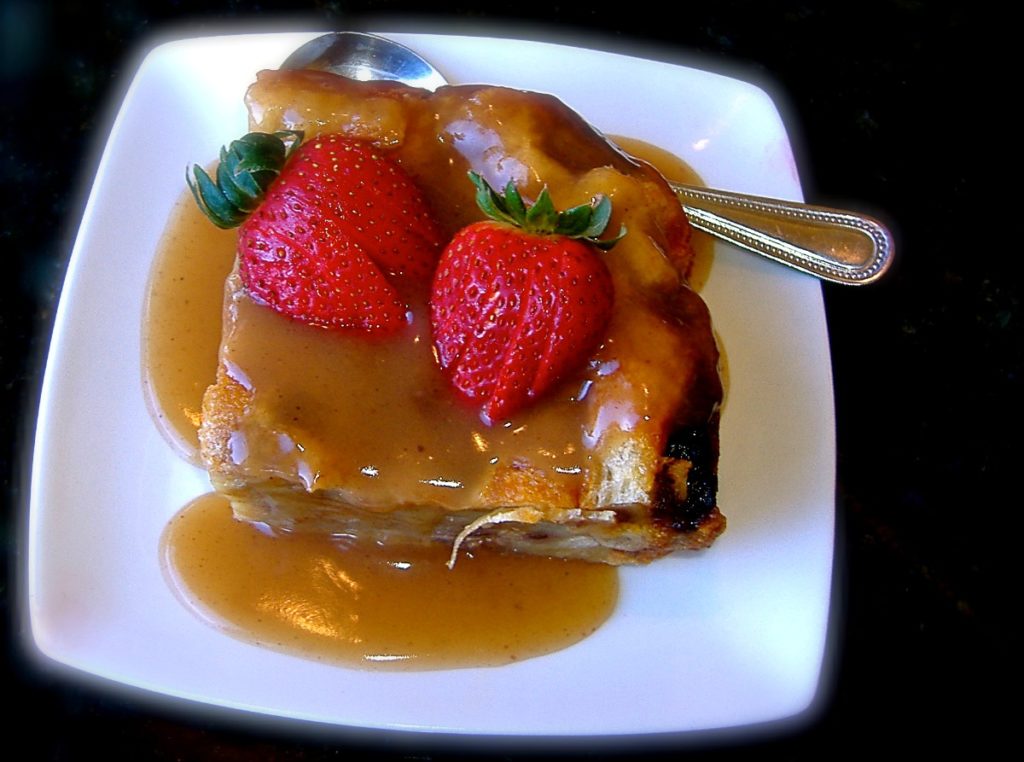 You’re as romantic as they come and you’d enjoy a classy time of celebration with your sweetheart but with your limited budget, how can you make that happen?

When you turn your pockets inside out all you find are a few dollars and a peppermint.

So, yeah, a spa weekend is out of the question.

Not at all, when that fancy meal is dessert.

Going out for dessert and dessert ONLY is one way to have a luxury experience for relatively little money.

That happy fact comes in handy when you celebrate your wedding anniversary on your anniversary day every single month as my L and I do.

Now we don’t celebrate EVERY monthly anniversary with a fab dessert out, but when we do, we like a place with ATMOSPHERE.

Such a place is a candlelit booth at St. Clair Winery & Bistro in Mesilla. And such a treat is one of their bread puddings. The specific kind of bread pudding can vary from season to season, but you can always count on this St. Clair dish to be worthy of your special occasion.

But before those glorious details of what’s waiting for you at St. Clair, let’s get clear on the basics:

What IS Bread Pudding?

Bread pudding is a dessert made of bread that has soaked in a mixture of eggs, milk, and sugar. Once baked, you cover it in a sweet boozy sauce ~ typically of bourbon or rum. Then you eat it, still warm ~ while taking long pauses between bites to sigh and consider how very good life is.

Curious how a dish that began as an answer to What can we do with all this leftover bread? could end up as one of the most fabulous, indulgent desserts ever.

St. Clair’s “Jackson Square Bread Pudding,” for example, tastes rich. And you FEEL rich, that is, pampered, while eating it. At least, that’s how I felt on our latest wedding anniversary celebration as I took spoonful after slow spoonful. 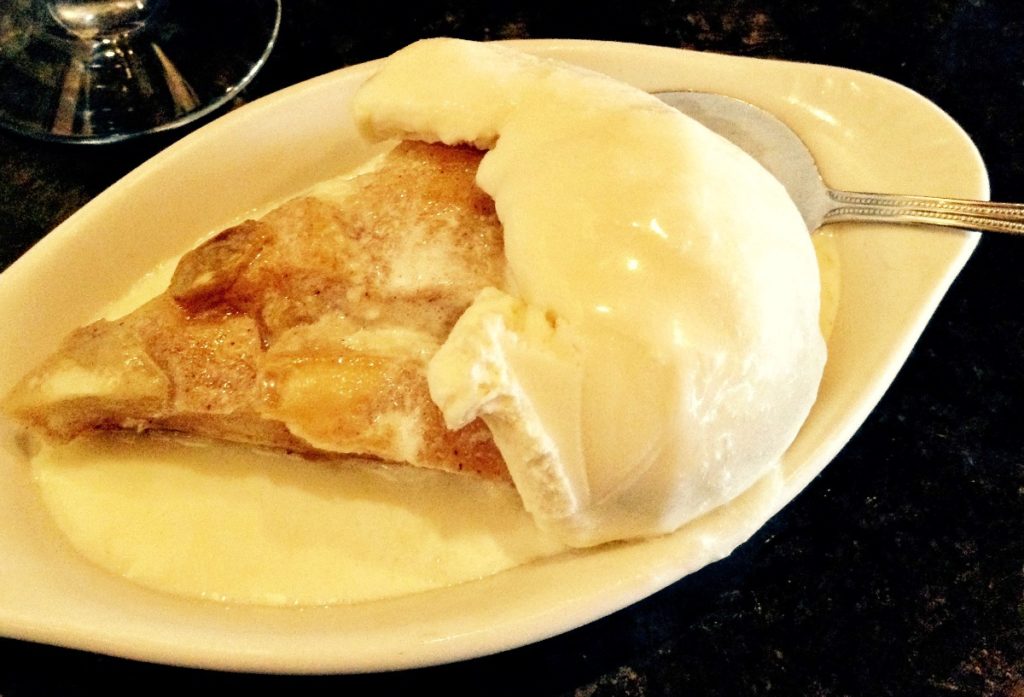 The texture of this bread pudding is S-M-O-O-T-H.  Bread, egg custard, chocolate chips, and golden raisins,  laced with cinnamon and vanilla, and butter rum sauce. With caramel and a generous scoop of vanilla ice cream on top.

Every single spoonful filled with flavor.

So even if you ever thought you didn’t like bread pudding, give St. Clair’s “Jackson Square” a try, and think again. You may find your new BDF – Best Dessert Fix.

Because once upon a time, I didn’t like bread pudding either. The idea of eating something I’d heard described as “soaked bread” just didn’t do it for me.

But my first taste of bread pudding at St. Clair changed all that.

It happened to be one of the times they had swapped out “Jackson Square” for another type of pudding. And that season’s choice was “Praline Bread Pudding.”

So never mind what they called it ~ bread pudding, bread shmudding ~ I expected this thing to be good.

I remembered how I DOVE into that rich, dense pecan and raisin stuffed square of wheat sweetened with custard, butterscotch, and that absolutely yum bourbon sauce you see pictured up top.

But a word of caution for if and when “Praline Bread Pudding” appears on the menu again: its taste is not as delicate as “Jackson Square.”

It’s a LOT on the sweet side.

Yet you may be willing to overlook that lack of subtlety if you’re as nutty for pecans as I am ~ shameless pun totally intended.

Point is, the bread pudding desserts at St. Clair Winery & Bistro ~ the “Jackson Square,” in particular ~ are a special treat.

So think . . . what occasion can you celebrate with a dessert date?

I challenge you to get a hold of that special person and run off to St. Clair Winery & Bistro for an experience you’ll both remember for years to come.

And if you don’t have someone else right now, take yourself!

The world could use a few more corny romantics, don’t you think?

What is your favorite SPECIAL OCCASION dessert and where do you get it?